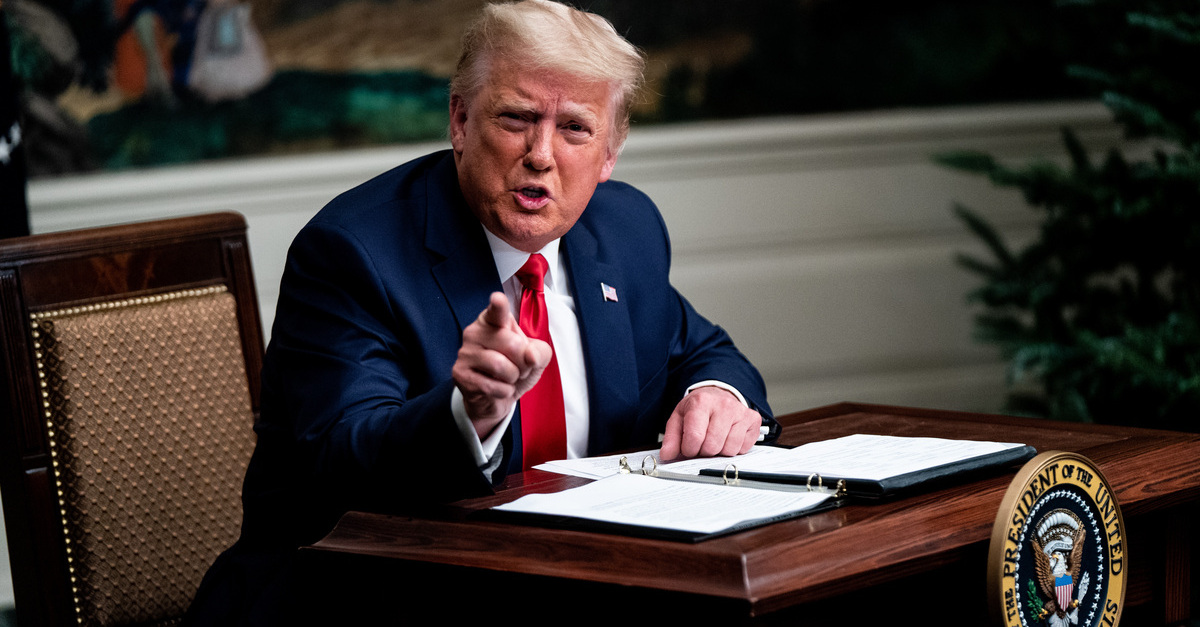 President Donald Trump speaks in the Diplomatic Room of the White House on Thanksgiving on November 26, 2020 in Washington, DC. Trump had earlier made the traditional call to members of the military stationed abroad through video teleconference.

Instead of joining the rest of us in calmly enjoying turkey-and-stuffing sandwiches and reflecting on the joys of the holiday season, President Donald Trump is flipping out over the latest humiliating hashtag. His demand? If the internet can’t be nicer to him, let’s burn it all down.

The president’s latest tantrum appears to have been sparked by Thanksgiving Day pictures of him signing legislation behind a tiny desk.

May this be how we remember the Trump presidency: a baby at his tiny little desk throwing a tantrum pic.twitter.com/T26DjF1fL4

Almost immediately, #DiaperDon started trending, and in poured all the jokes.

I normally don’t kick a guy when he’s down. But Donnie’s down 6 million votes and throwing temper tantrums like a toddler still in diapers, so… #Pampered #FullOfCrap #DiaperDon

“Make sure the presidential seal is on it so I don’t look silly!” — #DiaperDon pic.twitter.com/gBM28yT61P

Someone had to sit at the little kids table this year for thanksgiving #diaperdon pic.twitter.com/pDKAEp61dW

The president, though, wasn’t amused. Despite the fact that POTUS himself had joked in the past about the size of this particular desk, his response to Thursday’s trending mockery was to revert to demand that Section 230 be ended because “false ‘Trends'” were mocking him—a national security threat.

This is not the first time Trump has demanded a change federal communications law in response to Twitter mockery. For months, Trump and his supporters have made repeal of Section 230 a major talking point. After Facebook and Twitter began regularly removing and flagging Trump’s posts filled with inaccuracies and falsehoods—and even temporarily locking down the president’s account—he zeroed in on the internet platforms themselves as his primary enemy.

Section 230 of the Communications Decency Act of 1996 protects internet companies from legal liability for what users post on their platforms. Facebook and Twitter are platforms, not publishers. This means that the internet business themselves would not be held liable for defamation committed by a user.

The kind of shield offered by Section 230 is key to the lives of everything from Yelp to Facebook, and Instagram to Parler. Without it, platforms would need to police user content so closely that it would be impractical for them to survive. Despite these legal limitations on liability, most platforms do employ terms of service that require users to follow some guidelines—but those are internal rules, not ones imposed by the government. In other words, Twitter wouldn’t be legally liable for allowing Trump to share false information, like, say, a tweet claiming Joe Biden didn’t actually win the election.

However, the platforms are well within their legal rights to impose certain restrictions on their users. They are private businesses and they set the rules for how consumers use their services. That’s why Twitter can shut down the president’s account, or flag some of his tweets as inaccurate.

President Trump has long struggled with distinguishing between private and public action, particularly in the context of the internet. Trump now appears to be trying his hand at predicting Twitter’s future, appearing to claim that the social media giant will decline in popularity because it isn’t sycophantic enough anymore.

Others, though, have a different take on a world without Section 230.

If Section 230 is eliminated (ending liability protection for platforms over what people say on their platforms that may cause damage), as Republicans are demanding, the first thing platforms would do is ban Republican leadership because they regularly lie & incite violence.

Can someone tell #DiaperDon that “terminating” Section 230 would prob get him kicked off Twitter?

Whatever logic may exist as to a hypothetical repeal or amendment of Section 230, the president’s assertion that the change must be done in the interest of “national security” is baffling. Twitter had something to say about that, too.

Yes, the president is proclaiming it a matter of national security for someone (I wonder who) to be able to sue a place like twitter when a user posts something he doesn’t like on it. Wow, #DiaperDon is tearing him up. And it also shows what he thinks “national security” means. pic.twitter.com/1JU9QgjaKv

Ready as ever to make important policy for the nation and invoke national security based on how he feels personally, in this case the fact that #DiaperDon is trending on Twitter. I wish I were making this up. pic.twitter.com/H5LZjy7gOb

HE’S SAYING THAT THE RUMOR THAT HE WEARS DIAPERS IS A NATIONAL SECURITY THREAT.

Others were particularly bothered by the timing of Trump’s invocation of “national security,” coming so shortly after his pardon for former national security advisor Michael Flynn.

#diaperdon trending and @realDonaldTrump throws a #TrumpTantrum because thinks it’s a national security threat. He’s fine with Flynn back channeling to Russians though. #TinyDesk #TinyHands #TrumpIsALaughingStock