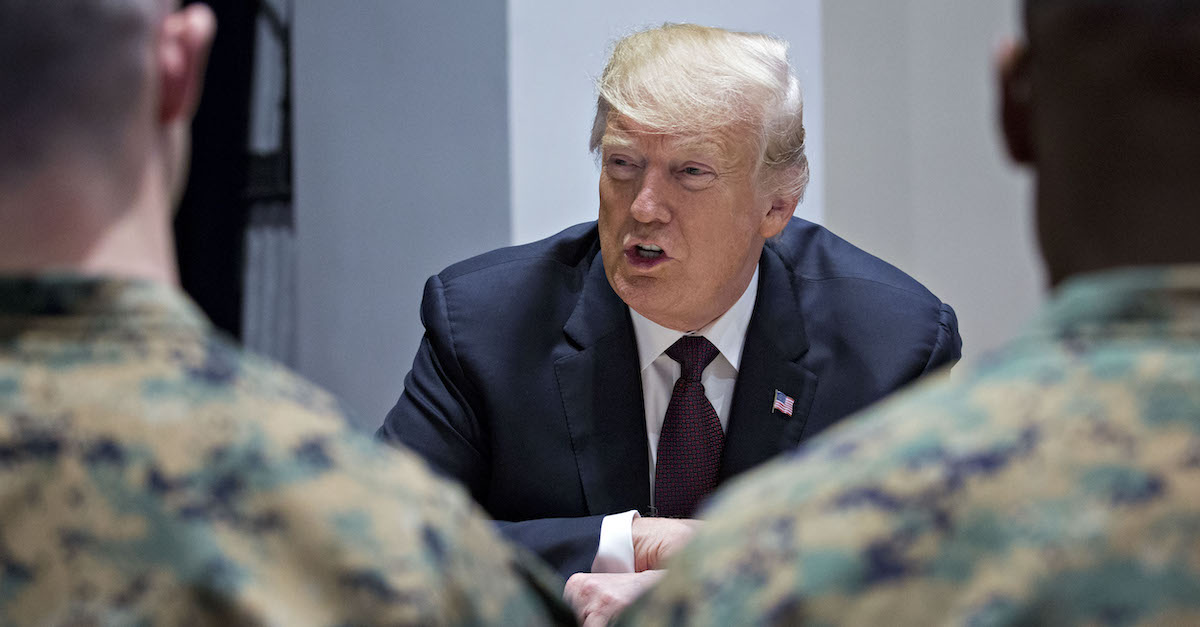 President Donald Trump is threatening to reject a bill to fund the U.S. military unless a bipartisan slate of legislators agrees to remove a provision that would rename military bases currently named after Confederate leaders. That’s according to an NBC News report sourced to the White House, the Department of Defense, and Congress.

According to the report, Trump’s steadfast refusal to allow the bases to be renamed is jeopardizing legislation that is supported by both Republicans and Democrats in the House. The measure had been one of the final disagreements between Trump and former Secretary of Defense Mark Esper, who had reportedly been working with members of Congress on the bill before he was terminated.

In spite of Trump’s stated opposition to the effort, the Republican led Senate Armed Services Committee in June approved a proposal that would change the names of bases and other military defense equipment honoring Confederate military leaders. Sen. Elizabeth Warren, who authored the original provision, added the proposal as an amendment to the National Defense Authorization Act (NDAA), the bill that authorizes annual military spending.

“I will Veto the Defense Authorization Bill if the Elizabeth ‘Pocahontas’ Warren (of all people!) Amendment, which will lead to the renaming (plus other bad things!) of Fort Bragg, Fort Robert E. Lee, and many other Military Bases from which we won Two World Wars, is in the Bill!”

I will Veto the Defense Authorization Bill if the Elizabeth “Pocahontas” Warren (of all people!) Amendment, which will lead to the renaming (plus other bad things!) of Fort Bragg, Fort Robert E. Lee, and many other Military Bases from which we won Two World Wars, is in the Bill!

As the president has continued to dig his heels in on the issue, several prominent members of the GOP have reneged on the agreement to join the president’s position.

Earlier this week, Sen. James Inhofe (R-Okla.), chairman of the Armed Services Committee, said the provision was a “big issue” in the party’s negotiations with Democrats, per NBC.

“Only the president can say whether or not there’s any room for a negotiation,” Inhofe told NBC, adding it was doubtful that Majority Leader Mitch McConnell (R-Ky.) would bring a bill to the floor “that has a veto on it” from the president.

More than 30 Democratic Senators earlier this month penned a letter to Inhofe defending the provision and urging him to get behind the effort.

“Millions of servicemembers of color have lived on, trained at, and deployed from installations named to honor traitors that killed Americans in defense of chattel slavery,” the Nov. 10 letter stated. “Renaming these bases does not disrespect our military – it honors the sacrifices and contributions of our servicemembers in a way that better reflects our nation’s diversity and values. We know who these bases were named for and why they were named. It is long past the time to correct this longstanding, historic injustice. We must not shrink from our solemn duty in his moment.”

However, a congressional aide with knowledge of the negotiations told NBC that Trump hasn’t budged on the issue, even though President-elect Joe Biden—who’s publicly supported the measure—would likely be able to change the names with an executive order upon taking office.

“Why put a large, important bill at risk for something that will come to pass anyway?” the aide asked.