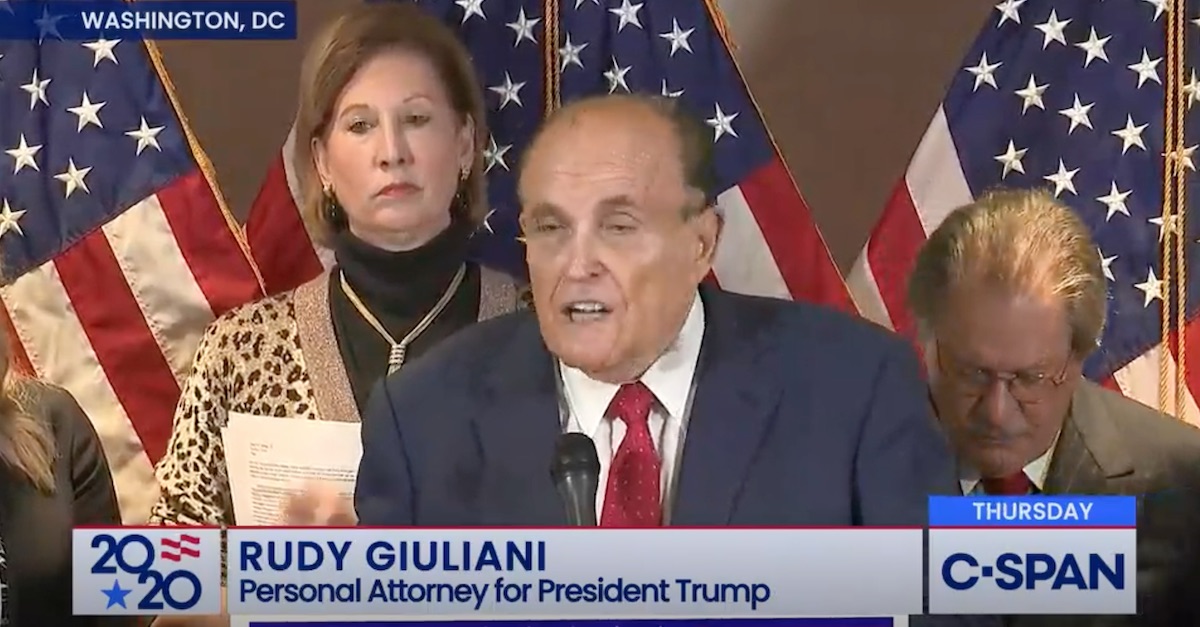 Trump campaign lawyer Joe diGenova made a “stunning” comment on Monday in which he called for a former Trump administration official’s head. While some have attempted to frame this as troubling hyperbole, legal ethics experts say that it’s in diGenova’s best professional interest to apologize in advance of possible disciplinary action.

DiGenova, a former U.S. Attorney known for his Fox News appearances and his work with Rudy Giuliani to dig up Ukraine dirt on Joe Biden among other things, was one of several attorneys present in the D.C. lobby of the Republican National Committee’s headquarters on Nov. 19. There, Giuliani, Sidney Powell, and Jenna Ellis led the wild charge against the results of the 2020 election. It didn’t take long for the Trump campaign to distance itself from Powell after her performance.

DiGenova, for his part, had Rudy’s back, but he was not the star of that event. He did not speak.

DiGenova certainly spoke loud and clear on Monday during a segment on Newsmax’s The Howie Carr Show. DiGenova, introduced as a member of President Donald Trump’s legal team, said that Chris Krebs—a cybersecurity official Trump fired for saying the 2020 election was secure—should be “taken out at dawn and shot.”

“Anybody who thinks the election went well, like that idiot Krebs who used to be the head of cybersecurity. That guy is a class A moron. He should be drawn and quartered. Taken out at dawn and shot,” diGenova said.

Around the 24:00-minute mark of the Carr program, diGenova used the word “we” when discussing the litigation “we are pursuing”—cementing the capacity he was speaking in. Indeed, President Trump himself confirmed weeks ago that diGenova and diGenova’s law partner and wife Victoria Toensing were part of the Trump campaign legal team.

I look forward to Mayor Giuliani spearheading the legal effort to defend OUR RIGHT to FREE and FAIR ELECTIONS! Rudy Giuliani, Joseph diGenova, Victoria Toensing, Sidney Powell, and Jenna Ellis, a truly great team, added to our other wonderful lawyers and representatives!

DiGenova is a licensed attorney in the District of Columbia whose status is in good standing. He was admitted to the bar in 1970. Could he be held accountable for his words?

Krebs, the former Director of the Cybersecurity and Infrastructure Security Agency, already responded to the diGenova remarks on Tuesday morning by saying that he and his lawyers were examining their legal options.

“It’s certainly more dangerous language, more dangerous behavior,” Krebs said. “The way I look at it is that we are a nation of laws, and I plan to take advantage of those laws. I’ve got an exceptional team of lawyers that win in court, and I think they’re probably going to be busy.”

Krebs did not get into specifics, but he did say diGenova “can know that there are things coming.” One conceivable course of action would be to file a complaint with the Office of Disciplinary Counsel.

Later on Tuesday, diGenova told the Washington Examiner that he meant “no harm” when he said Krebs should be shot. All of that stuff about Krebs being drawn and quartered and/or shot at dawn was clearly a joke and nothing more than hyperbole, he claimed.

“For anyone listening to the Howie Carr Show, it was obvious that my remarks were sarcastic and made in jest. I, of course, wish Mr. Krebs no harm. This was hyperbole during political discourse,” diGenova said.

Lawyers, at least one of whom has received death threats in similar circumstances, were not really convinced by this explanation.

Total lie by DiGenova. No rational person listening to his comments would have taken it as "jest". No one should accept this excuse.#Consequences #Accountability https://t.co/AUfJ9dxs1U

Come on guys! Just a colorful metaphor, or something. https://t.co/4D89Tt70mn

Law&Crime asked legal ethics scholar Stephen Gillers, a professor at New York University School of Law, whether diGenova could be held accountable for professional misconduct and, if so, what rules he may have violated.

These say, respectively, that a lawyer commits “professional misconduct” when they “(b) Commit a criminal act that reflects adversely on the lawyer’s honesty, trustworthiness, or fitness as a lawyer in other respects” or “(d) Engage in conduct that seriously interferes with the administration of justice.”

“With regard to (b), it is not necessary that the lawyer have been prosecuted so long as the act is criminal and it adversely reflects on his ‘fitness,'” Gillers said. “In my view, the comment does reflect on diGenova’s fitness as a lawyer.”

Gillers said there could be a dispute as to whether diGenova’s comment “interfered with the administration of justice,” as stated in Rule 8.4(d).

“To violate (d) the lawyer must interfere with the administration of justice. Krebs is not a judge. He does not himself administer justice. But what Krebs said, and was threatened for saying, is also the subject of court cases where the campaign, diGenova’s client, is a party,” Gillers said. “Those courts are administering justice.”

“So a disciplinary body could find that diGenova’s threats against Krebs for saying the election was fair seriously interferes with the work of the courts in addressing the campaign’s claim that the election was unfair,” he added.

Law&Crime also asked what, if any, discipline diGenova could realistically face.

“The discipline would depend on whether diGenova apologizes and credibly appreciates the wrongfulness of his comment and on whether he has previously been disciplined,” Gillers answered. “I think on these facts a finding of a violation of the quoted rules would at least require a public censure or reprimand and possibly suspension from practice, depending on the presence or absence of mitigating evidence.”

Associate Dean for Research and Faculty Development and Hugh Macgill Professor of Law at UConn Leslie Levin, an expert on lawyer discipline and legal ethics, said that diGenova’s words, though “unbecoming of a lawyer,” did not clearly violate a disciplinary rule.

“I don’t think anyone would think his words constitute incitement. There is no D.C. disciplinary rule that he clearly violated,” Levin told Law&Crime. “His language was unbecoming of a lawyer but is protected by the First Amendment.”

Others said diGenova should be disbarred—”full stop”—for making “these kinds of threats.”

And it appears at least one bar complaint, citing Rule 8.4, has already been filed against diGenova.