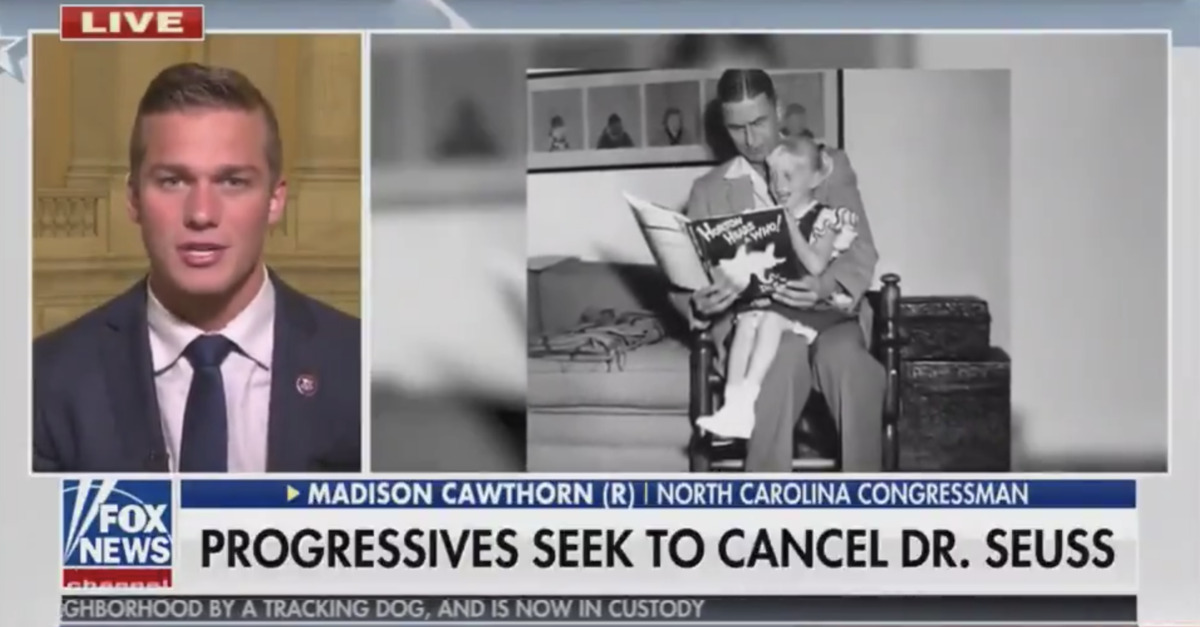 Fox News is being criticized for a Tuesday interview with Rep. Madison Cawthorn (R-N.C.) that failed to note the myriad sexual harassment allegations currently engulfing the darling of the right wing—even after the network criticized other outlets for ignoring similar scandals facing Democrats and certain GOP apostates.

On Feb. 26, BuzzFeed News reported that four women who attended Patrick Henry College with Cawthorn were subjected to sexual harassment and misconduct in which he “was aggressive, misogynistic, or predatory toward them.” Those allegations were corroborated by over three dozen others, according to the outlet.

The exposé by reporters Addy Baird and Brianna Sacks notes:

Their allegations include calling them derogatory names in public in front of their peers, including calling one woman “slutty,” asking them inappropriate questions about their sex lives, grabbing their thighs, forcing them to sit in his lap, and kissing and touching them without their consent. One of these women now works as an intern for another Republican member of Congress and passes Cawthorn in the corridors of the Capitol. According to more than a dozen people — including three women who had firsthand experience and seven people who heard about these incidents from them at the time — Cawthorn often used his car as a way to entrap and harass his women classmates, taking them on what he could call “fun drives” off campus. Two said he would drive recklessly and ask them about their virginity and sexual experiences while they were locked in the moving vehicle.

On Tuesday morning, Cawthorn appeared on Fox & Friends First where he criticized recent criticism of Dr. Seuss’s racist caricatures of Black people—caricatures which have led some school districts to reconsider the American author’s place in the primary school canon. The sexual harassment and misconduct scandal didn’t come up.

Madison Cawthorn was on Fox & Friends First for an interview this morning. He was never asked about the multiple sexual harassment allegations made against him, but he was given an opportunity to rail against the purported cancelation of Dr. Seuss. pic.twitter.com/fC0XpVj8Lg

Noted whistleblower attorney Mark Zaid called out the network for ignoring those sexual harassment claims during the broadcast, arguing that they had a distinct opportunity to address the issue.

“Talk about hypocrisy, Fox News criticized other media outlets for not asking Lincoln Project Members [about] allegations concerning an independent colleague yet here they have alleged offender ON air [and] they ask nothing,” Zaid said via Twitter. “Not….One….Question.”

Fox News was relentlessly critical of the Lincoln Project, a pro-Joe Biden political action committee run by several former Republicans who said they were personally appalled by all things Donald Trump. Oppositely, the group’s advertisements became sensations on liberal media network MSNBC. They also received glowing coverage from CNN during the 2020 election for those controversial ads and their status as so-called “Never Trump” Republicans.

But a series of scandals implicated the group, its founders, and employees in racism, Islamophobia, financial management seen as profiteering and self-dealing—dubbed a “scam” and a “grift” on their liberal donors—and, most recently, an allegedly endemic pattern of sexual misconduct by co-founder John Weaver featuring one alleged 14-year-old victim. Those misconduct allegations were ignored by leadership of a homophobic, sexist and all-around “toxic” work environment, according to former employees. Some began to wonder whether the Lincoln Project’s leadership was quite so different from Trump after all.

Fox News pointed out the glaring lack of coverage that the group’s downfall received on their corporate competitors’ airwaves.

One story was titled: “MSNBC passed on multiple opportunities to ask Lincoln Project honchos about John Weaver scandal.” Another: “Mainstream media glorified, promoted Lincoln Project as ‘NeverTrump geniuses’.” And another: “CNN commentator appears on scandal-ridden Lincoln Project’s YouTube show.” And so on.

Even after the scandals were public knowledge, MSNBC and CNN’s viewers might not have known about alleged wrongdoing. Anderson Cooper passed on an opportunity to bring up the allegations with George Conway. In sum, Lincoln Project figures appeared on both networks a total of 23 times before either network addressed the allegations with members of the Lincoln Project directly—and only after the claims were aired in the pages of The New York Times.

The conservative network similarly criticized New York Gov. Andrew Cuomo (D) and his brother Chris Cuomo in light of the former’s recent sexual harassment scandals. Raising questions of journalistic ethics, CNN anchor Cuomo interviewed the politician Cuomo numerous times in a series of good-natured, softball segments that built up the governor’s status and stature as a leader during the first months of the coronavirus (COVID-19) pandemic. None of those segments contained adversarial journalism. Those segments did not address Gov. Cuomo’s nursing home policy directive amid the pandemic—which has since become the subject of intense scrutiny and investigation in the aftermath of a report from the New York Attorney General and an admission by a top Cuomo aide to withholding nursing home death data from state legislators.

When the sexual harassment scandals broke, the star of Cuomo Prime Time did not immediately address the news about his brother. Again, Fox News published series of critical stories. Again, Fox News made the point.

“Obviously I am aware of what is going on with my brother,” the younger Cuomo finally said on Monday night. “And obviously I cannot cover it because he is my brother. Now, of course CNN has to cover it. They have covered it extensively and they will continue to do so.”

But despite all of the foregoing, Fox & Friends First did not press Cawthorn to respond to the allegations against him. A survey of Fox News’s archives shows that the online edition, at time of this story’s publication, hasn’t reported on the sexual misconduct allegations against Cawthorn.