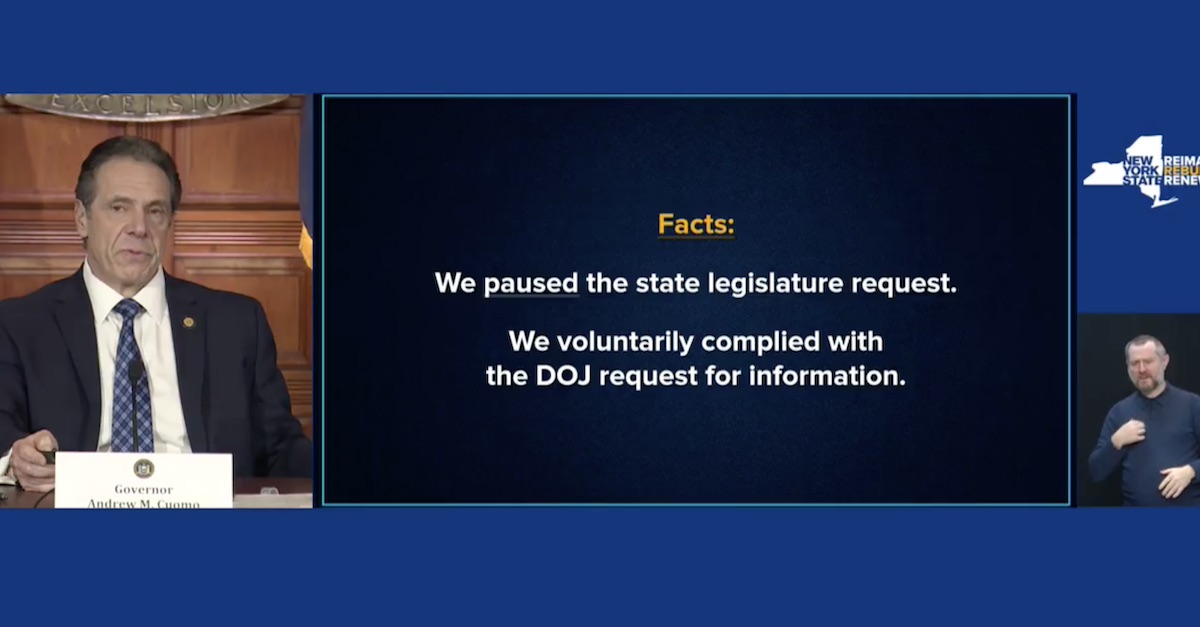 New York’s Democratic Gov. Andrew Cuomo, one of the most visible figures in America during the COVID-19 pandemic and the author of a related “Leadership Lessons” book, said Monday that he himself has learned a lesson: his administration’s failure to answer the questions of the press and the public about COVID-19 deaths in Empire State nursing homes created a “void” that led to “conspiracy theories,” “misinformation” and “disinformation.”

The Cuomo presser began with the governor talking about current COVID-19 positivity rates across the five boroughs, then shifted to saying that “New York was ground zero for COVID” and that “nursing homes were and still are ground zero.”

Recall: in recent weeks, New York Attorney General Letitia James (D) released a report relaying preliminary findings that “a larger number of nursing home residents died from COVID-19 than the New York State Department of Health’s (DOH) published nursing home data reflected and may have been undercounted by as much as 50 percent.” AG James’ report also raised questions about Cuomo’s March 25, 2020 order on practices for admitting or readmitting patients to nursing homes after confirmed or suspected COVID-19 diagnoses.

“No resident shall be denied re-admission or admission to the nursing home solely based on a confirmed or suspected diagnosis of COVID-19,” Cuomo’s order stated. “NHs [Nursing Homes] are prohibited from requiring a hospitalized resident who is determined medically stable to be tested for COVID-19 prior to admission or re-admission.”

The guidance “may have put residents at increased risk of harm in some facilities and may have obscured the data available to assess that risk,” James’ report said.

The report noted that the Office of the Attorney General “asked 62 nursing homes for information about on-site and in-hospital deaths from COVID-19 for the week of March 1 to the date of the facility’s response, which varied from the week of April 12 to July 19.”

“This sample of facilities – approximately 10 percent of the number of nursing homes in New York – was not randomly selected. OAG investigation teams requested data regarding resident deaths during the course of its preliminary investigations,” the report said.

Gov. Cuomo prefaced his Monday remarks by saying “I understand fully how difficult it has been” this past year, pointing as well to the “toxic political environment” in which “everything gets politicized.”

Late last week and over the weekend, there were a number of headlines about Cuomo’s office withholding nursing home data from state legislators out of fear that said data would be used by the Trump administration to go after Cuomo’s administration.

Cuomo aide Melissa DeRosa said so on a call last week with Democratic state legislators. DeRosa said in a statement to ABC News that she was “explaining that when we received the DOJ inquiry, we needed to temporarily set aside the Legislature’s request to deal with the federal request first.”

The Trump administration’s Department of Justice first demanded data from Cuomo’s administration and states run by three other Democratic governors back in Aug. 2020. By Oct. 2020, DOJ expanded an investigation into whether New York undercounted COVID-19 deaths in nursing homes.

ABC News reporting included a transcript of what DeRosa said on the conference call in question. She referenced Donald Trump’s tweets.

Allegations of a politically motivated “cover-up” soon followed reporting on that phone call.

Cuomo, drawing a distinction between “facts” and “spin,” claimed that the both the state Assembly and Senate was told that complying with the aforementioned DOJ investigation would take “precedence” over a state investigation. Lawmakers had a different understanding.

OK – So, I think the question now is: WHO in the Legislature, whether it was staff or lawmakers, told the administration they were fine to delay their request in favor of the U.S. DOJ?

Because either someone did, or something got lost in translation, or someone dropped the ball.

Cuomo claimed that the New York State Department of Health “fully and publicly” and “accurately” reported “all” COVID-19 deaths in nursing homes and hospitals.

Then the governor shifted his attention to percentage of nursing home deaths among total deaths in New York as compared to other states—particularly stats placing Pennsylvania, Florida, and Massachusetts in a more negative light than the Empire State. 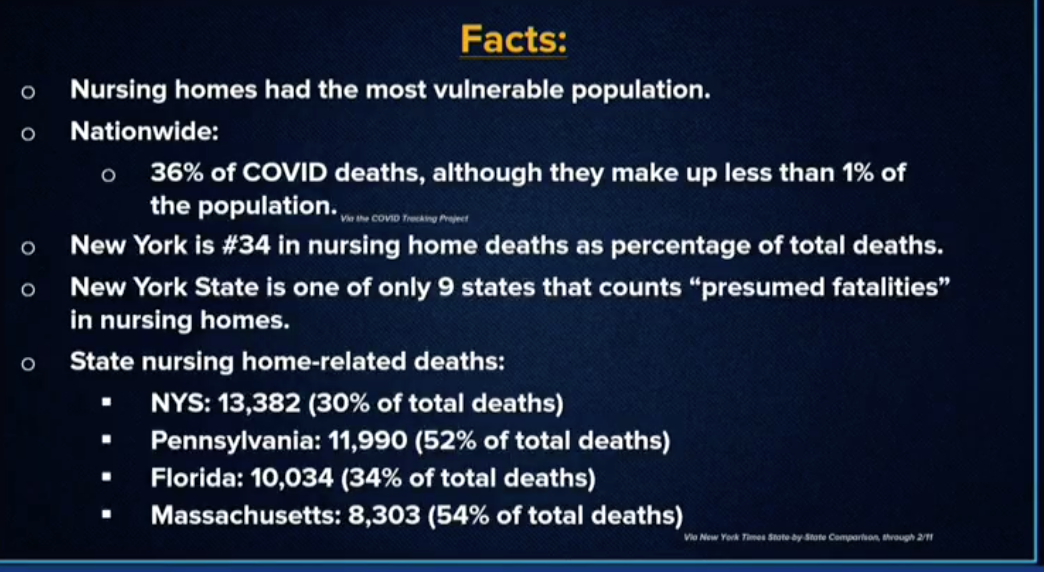 Cuomo, in support of the idea that COVID-19 did not get into nursing homes becomes because of March 25 guidance, said that death rates remained the same after the directive. He also said that COVID-19 got into the facilities through staff who walked in. He also blamed visitors and asymptomatic spread, the latter of which he claimed was not a point of emphasis nor understood at the time. He further said his administration’s 24/7 attention to the spiraling pandemic, which his administration is accused of mismanaging, explained why his administration was too slow to respond to public requests.

Cuomo acknowledged repeatedly “there was a delay in providing the press and the public” additional information.

One of his main takeaways was that some hospitals and nursing homes perform well and some perform “less well.” He also called vaccination rates in those facilities “indicia” of whether performance is well or less well.

Gov. Cuomo said he regretted that his administration did not answer questions quickly enough, nor prioritize that.

He said that a “void’ was created by own administration’s failure to provide information in timely manner, allowing  “conspiracy theories” and “disinformation” to fill the void and create a narrative.

“The truth is,” said Cuomo, “Everyone did what they could.”

“In retrospect, should we have given more priority to fulfilling information requests? In my opinion, yes,” he added.

Cuomo asserted at one point that “there is nothing to investigate.”

"There is nothing to investigate here," Gov. Cuomo tells @MKramerTV when asked about a potential attorney general investigation into allegations that his office covered up COVID nursing home death numbers https://t.co/Nj065D03oX pic.twitter.com/g0991yqqNy

The March 25th memo caused a deadly crisis in nursing homes? No it didn’t, he said.

The data was wrong? No it wasn’t, he said.

“These were the best professionals doing the best they could,” Cuomo went on.

At the end of the presser, Cuomo was asked if he felt he had to apologize. 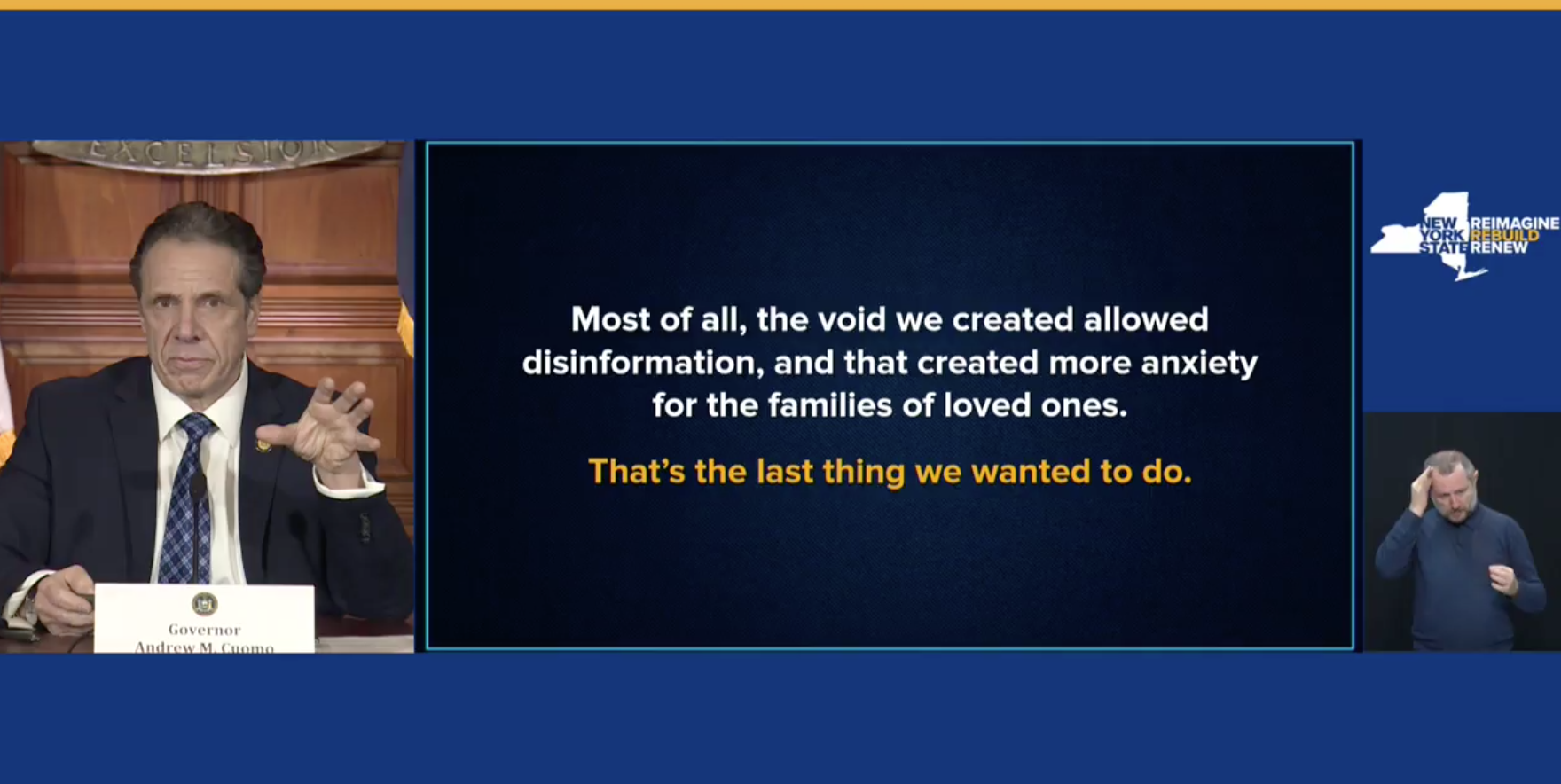 Cuomo said his team “made a mistake in creating the void” that “allowed press, people, cynics, politicians to fill the void.”

“When you don’t correct disinformation you allow it to continue,” he said. “In retrospect, we should have prioritized providing more information.”

For this, Cuomo said, there were “no excuses” and he took responsibility for it, noting that he is “in charge.”

Cuomo apologized for creating “confusion and cynicism and pain for the loved ones” of those whose lives were lost to COVID-19, but he asserted that “total death counts were always accurate” and “nothing was hidden from anyone.”

Watch the news conference below: