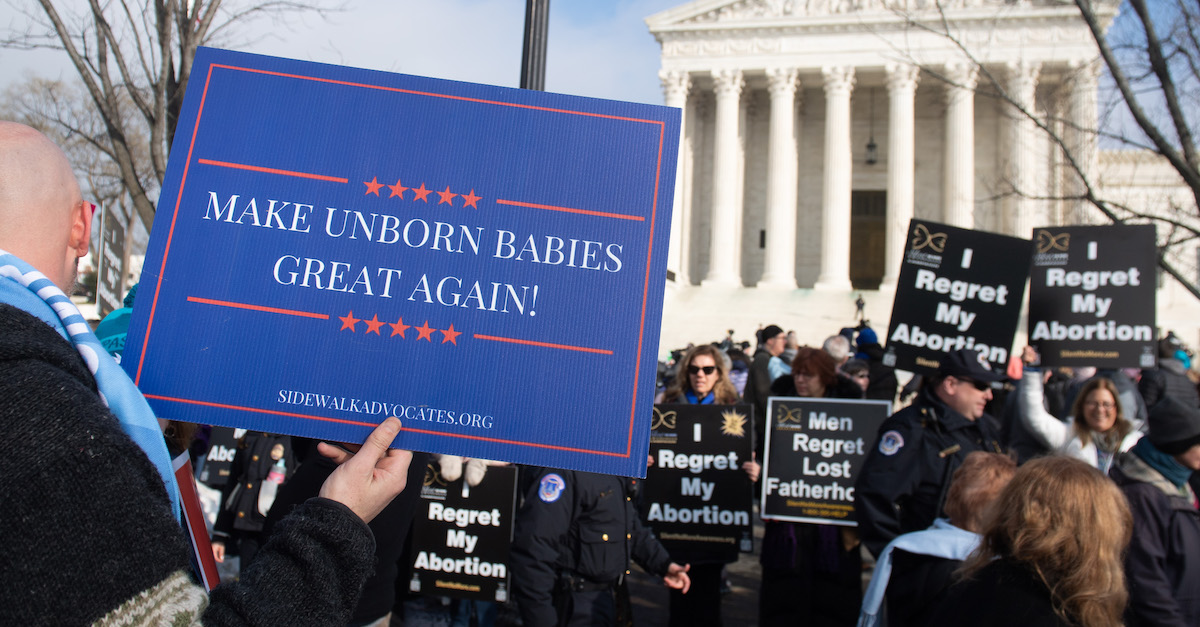 The State of Missouri has followed in the footsteps of Georgia and Alabama by passing an abortion bill of its own. While the Missouri bill isn’t as restrictive as Alabama’s, it nonetheless threatens to incarcerate doctors who perform abortions.

The Republican-led Missouri Senate passed a bill early Thursday in the wake of Alabama Gov. Kay Ivey (R) signing the Human Life Protection Act (a near-total abortion ban) into law Wednesday night. The bill, the Missouri Stands for the Unborn Act, bans abortions after eight weeks of pregnancy, does not include rape and incest exceptions, includes an exception for when the life of the mother is in danger, and threatens to imprison doctors for 15 years.

In Alabama, the possible punishment for doctors is 99 years. The Alabama bill also included no rape or incest exceptions. Both the Missouri and Alabama bills do not threaten to incarcerate women who receive abortions. The laws have not yet gone into effect and a fight over them is inevitable.

Missouri Gov. Mike Parson (R) has supported the bill. Once it goes back to the Missouri House, which the GOP also controls, it should follow that Parson signs it into law.

Alabama, Georgia and Missouri are not alone in this fight. Kentucky, Mississippi and Ohio (like Georgia), have passed bills banning abortion once a fetal heartbeat is detected.

In the aftermath of Brett Kavanaugh‘s confirmation to the Supreme Court, it was immediately assumed that pro-life groups and conservative states would try to ignite a new fight against Roe v. Wade. When Anthony Kennedy announced his retirement from SCOTUS, CNN legal analyst Jeffrey Toobin, for one, predicted that abortion would be illegal in 20 states, and soon.

While pro-life Americans would be thrilled with this development, pro-choice Americans are sounding the alarm over  a “coordinated attack on Roe v. Wade and women’s reproductive freedom.”

BREAKING: Missouri Senate just passed an 8 week abortion ban (24-0). No exceptions for rape or incest. Bill moves to the Senate; Governor has indicated he will sign.

Alabama lawmakers have voted to effectively ban abortion in the state. We see this for what it is: a direct attack on Roe v. Wade, and on women all across this country.

We will fight these attacks every step of the way.

A lot of other states are getting ready to follow Alabama’s attack on abortion and personal freedom. This is a nationwide assault on the right to an abortion. It's happening in Wisconsin: https://t.co/6ccJrqxuf1

Supreme Court Justice Stephen Breyer recently penned a dissent in a case that was unrelated to abortion, warning that–given his conservative colleagues’ willingness to overturn 40 years of precedent in that case–there was no telling what might be overturned next.

As Breyer said this, he cited to Planned Parenthood v. Casey.

Planned Parenthood v. Casey, in reaffirming Roe v. Wade, held that “matters,” such as abortion, “involving the most intimate and personal choices a person may make in a lifetime, choices central to personal dignity and autonomy, are central to the liberty protected by the Fourteenth Amendment.” As Law&Crime’s Elura Nanos noted elsewhere, Planned Parenthood v. Casey also prohibits abortion regulations that place any “undue burden” on women.

Republican lawmakers in Alabama, Missouri and Georgia clearly do not agree.

There was, however, recently a major ruling in Kansas that affirmed abortion rights in that state.

“We are now asked: Is this declaration of rights more than an idealized aspiration? And, if so, do the substantive rights include a woman’s right to make decisions about her body, including the decision whether to continue her pregnancy? We answer these questions, ‘Yes,’” the high court said. “We conclude that, through the language in section 1, the state’s founders acknowledged that the people had rights that preexisted the formation of the Kansas government.”