A long-sought 2019 Department of Justice Office of Legal Counsel memorandum recommending against charging then-President Donald Trump with obstruction has been released days after a federal appellate court ruled that the government must do so.

Following the March 2019 release of former Special Counsel Robert Mueller’s report summarizing his investigation into whether Trump’s campaign conspired with Russia to interfere with the 2016 presidential election, then-Attorney General Bill Barr declined to charge Trump with obstruction of justice.

At the time, Barr had cited an Office of Legal Counsel memo as the basis for his decision. We now have a copy the memo, which you can read below.

“A fair evaluation of the Special Counsel’s findings and legal theories weighs in favor of declining prosecution. While cataloguing actions that the President took, many of which took place in public view, the Report identifies no actions that, in our judgment, constituted obstructive acts, done with a nexus to a pending proceeding, with the corrupt intent necessary to warrant prosecution under the obstruction-of-justice statutes,” the memo says in one place. “Based on the evidence described and the legal theories articulated in Volume II of the Special Counsel’s Report regarding ‘whether the President hd obstructed justice in connection with Russia-related investigations,’ we believe that prosecution would not be warranted in the circumstances, wholly apart from constitutional considerations.”

“The Special Counsel’s obstruction theory would not only be novel, but, based on his own analysis, it would also be unusual because Volume I of the Special Counsel’s Report is conclusive that the evidence developed ‘was not sufficient to charge that any member of the Trump campaign [including the President] conspired or coordinated with representatives of the Russian government to interfere in the 2016 election,'” the memo said.

The memo concluded that among Trump’s analyzed conduct — whether regarding the firing of James Comey, statements Trump made to former White House counsel Don McGahn, or encouraging Michael Flynn, Roger Stone, Paul Manafort, and Michael Cohen not to “flip” — none of it amounted to obstruction.

At the end of the memo are the language of the recommendation, the date, and Barr’s signature. 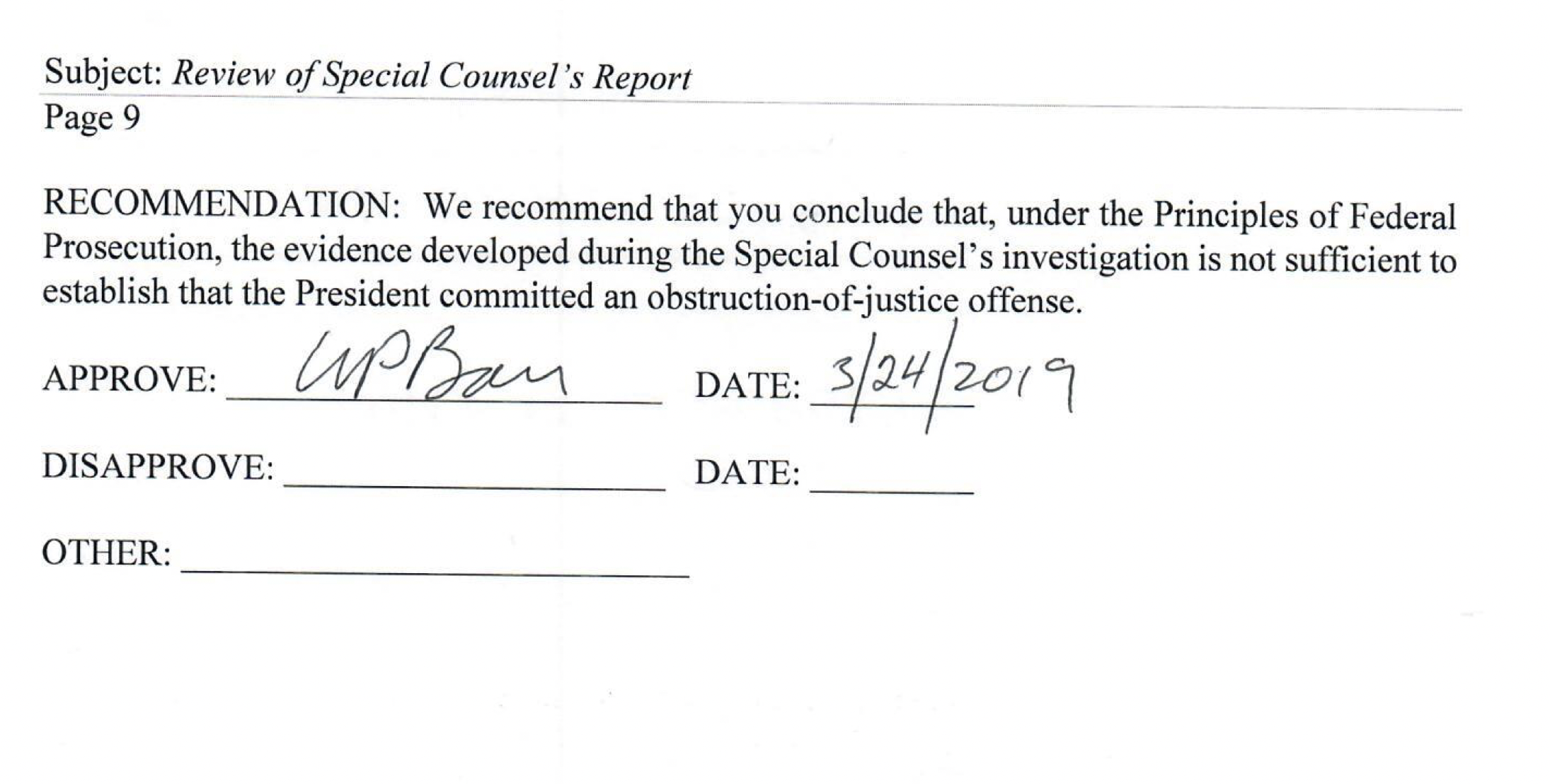 Watchdog group Citizens for Responsibility and Ethics in Washington (CREW), which sued under the Freedom of Information Act after the DOJ denied the their request for the memo, said in a press release that the OLC document was “a breathtakingly generous view of the law and facts for Donald Trump.”

“It significantly twists the facts and the law to benefit Donald Trump and does not comport with a serious reading of the law of obstruction of justice or the facts as found by Special Counsel Mueller,” the group said. “Among many other problems, it is premised on the fact that there was no underlying criminal conduct, which is not what Mueller found, and waives its hand at there being no exact precedent to compare it to.”

“It is clear why Barr did not want the public to see it,” the group added.