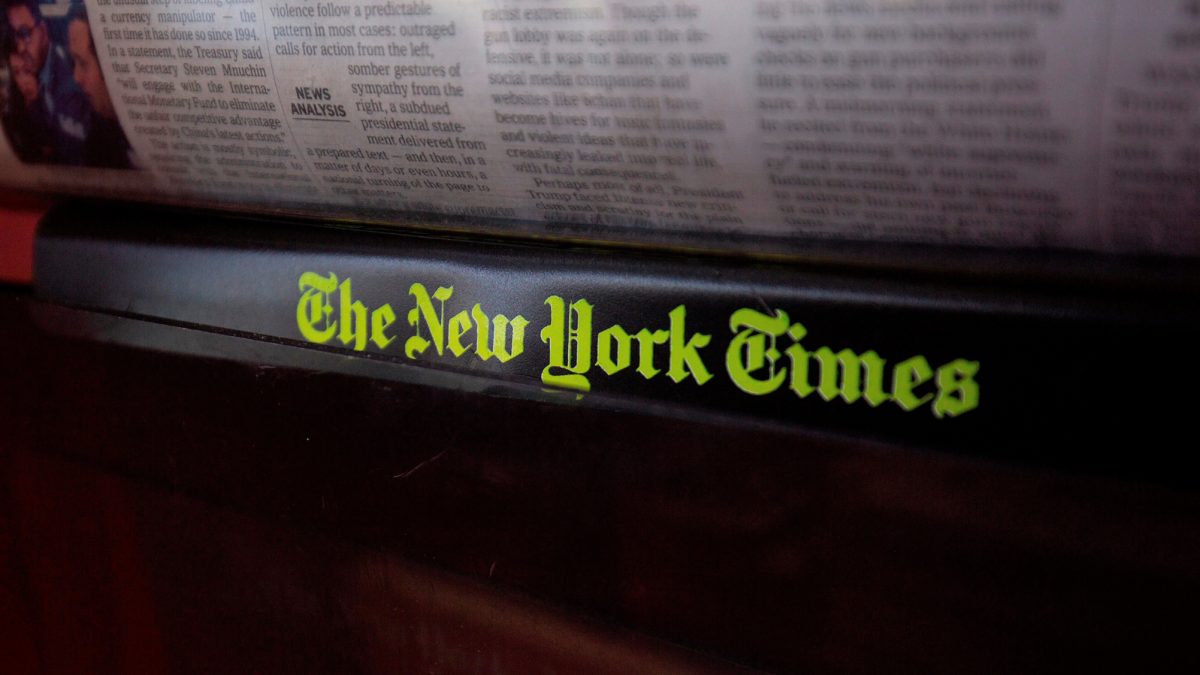 Hollywood Reporter Senior Editor Eriq Gardner was quick to troll the New York Times for a legal reporting blunder which, frankly, is neither terribly complicated nor difficult.

“Correction:  August 6, 2019.  An earlier version of this article incorrectly described the law that protects hate speech on the internet,” the New York Times reads.  “The First Amendment, not Section 230 of the Communications Decency Act, protects it.”

Gardner’s sarcastic ‘thinking face’ reply summed up the thoughts of many:

As readers of Law&Crime were made accurately aware one day before the New York Times ran its now-corrected report, Section 230 of the Communications Decency Act affords broad immunity to Web sites for content published online by users, not the sites themselves.  The analogy made by Congress in the early days of the internet was sort of like this:  because a phone company can’t be sued for defamation if Jimmy calls Suzie and defames Bobby, then Web sites can’t be sued if someone else uses the service to post something legally problematic.  A Web site, like Facebook (which wasn’t even around when the law was written), is not the speaker or the publisher.  The person posting the content is to blame.  We analyzed Section 230’s broad immunity with reference to 8chan recently and Alex Jones several times in the past.  The bottom line is that the cloak of legal immunity protects Web sites from having to pay damages to people injured by content.  It means high volume and sometimes high profits for Web sites of all types, benevolent and sinister.  The thicker the cloak of immunity for Web sites, the broader the speech allowed, benevolent and sinister.  Removing the cloak of immunity would, in theory, open Web sites up to damage awards and ergo force sites to police themselves in some fashion.  The financial pressures would likely force Web sites to clean up potentially dangerous content and/or eject potentially dangerous users.  (Traditional publishers and traditional broadcasters have long been required to police their content or face defamation verdicts.)

Section 230 neither explicitly protects nor criminalizes so-called “hate speech.”  The correction is accurate:  that’s the realm of the First Amendment.  As such, the U.S. Supreme Court has grappled with malicious speech many times over the years.  Justice White (joined by Justices Blackmun and O’Connor) raised the issue of “hate speech” in a concurrence to Justice Scalia’s opinion in a case involving the burning of a cross on an African-American family’s property.  Scalia wrote:  “Let there be no mistake about our belief that burning a cross in someone’s front yard is reprehensible. But St. Paul has sufficient means at its disposal to prevent such behavior without adding the First Amendment to the fire.”  In other words, “reprehensible” speech still has First Amendment protection.  All nine he justices agreed with the outcome, but

The underlying premise of the New York Times report is solid:  Section 230 has a very, very important history, and it is getting a sorely-needed fresh look.  Indeed, Congress has recently scaled back Section 230 immunity in an attempt to combat sex trafficking, and as the Times points out, other politicians are digging into whether the statute needs additional attention.  But confusing the Section 230 with the First Amendment is like confusing apples with creosote-dipped railroad spikes.