‘Very Gruesome, Very Violent’: Mother of Three Stabbed in Front of Her Child in ‘Domestic Violence Incident’ Before Collapsing in the Street, Police Say 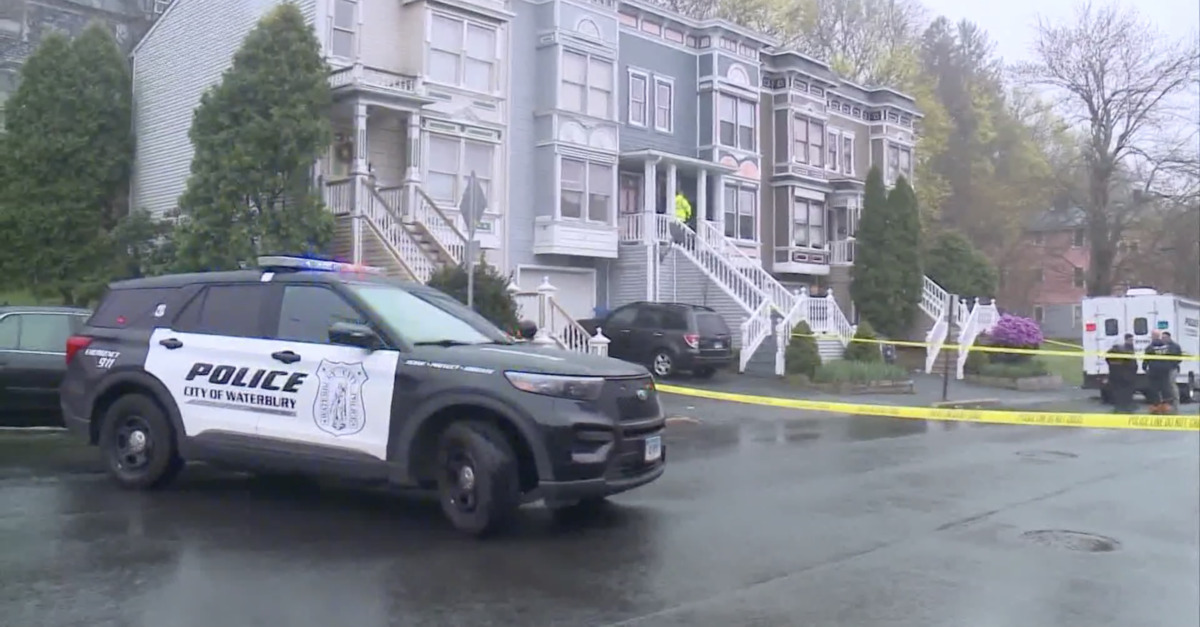 Authorities in a mid-sized Connecticut city have released shocking and gruesome details about the killing of a young woman who died in the middle of the street in front of her home earlier this week.

The victim’s husband has been blamed for her death.

Ainsley Panton, 28, stands accused of one count of murder in the first degree and two counts of risk of injury to a minor over the Tuesday slaying of 24-year-old Moesha Watson. Authorities allege the mother of three was stabbed to death while one of the children watched.

Police recovered a machete and multiple knives from the crime scene.

A store owner cited by the TV station said he saw the woman struggling to open her garage door, succeeding, and then falling down in the road on the way to the firehouse across the street.

“I heard somebody crying so hard,” the unidentified and shaken owner of Corner Grocery told WTIC. “The fire department came fast to do the CPR, but the lady died in the middle of the street.”

The incident occurred just after 10 a.m. on the day in question, police said, in the Overlook neighborhood of the city, marking its fifth homicide of the year so far. Watson was initially able to escape her assailant, according to Spagnolo, but eventually collapsed where she died even as first responders tended to her numerous wounds.

The first authorities to arrive were Waterbury firefighters, who were returning from a call when they noticed the awful scene.

“They saw a female that was in distress in the roadway,” Spagnolo explained. “They went and investigated that particular incident and realized she needed medical attention.”

Police officers arrived at precisely 10:19 a.m. on the day in question. Watson was found with multiple cuts to her neck, wrist and elsewhere. She was pronounced dead less than 10 minutes later.

The victim, police believe, was stabbed during what they described as a domestic violence incident that begin earlier that morning inside the house where Watson, Panton and the four children lived. Watons’s 3-year-old and 5-year-old were home at the time, police said, while two older children were at school during the violence.

“At some point during that domestic violence incident, Ainsley Panton did stab Moesha a number of times throughout her body,” Spagnolo added.

According to New Britain, Conn.-based NBC affiliate WVIT, the couple were just married last year. Watson moved to the United States from Jamaica in 2011. Her family told the TV station that she was on the cusp of finishing nursing school at the time she was killed.

The family was new to the area, WVIT reported.

The two children who were home at the time were taken to the Waterbury Hospital for an evaluation before being placed into the custody of the Connecticut Department of Children and Families.

A neighbor shared her experience of the tragedy with WTIC.

“I heard those kids crying,” Marquetta Gill said, as she clutched her own child during an interview. “I couldn’t even imagine like something like that occurring and that would be my kids or something. You know, it’s sad now. Those kids have no mother, no father.”

According to the Hartford Courant, the Connecticut Office of the Chief Medical Examiner has yet to release their official determination over the cause and manner of Watson’s death.

Panton was also reportedly taken to a nearby hospital where he was treated for a heart condition. Police say they are currently in the process of securing his initial arraignment on the slate of charges.