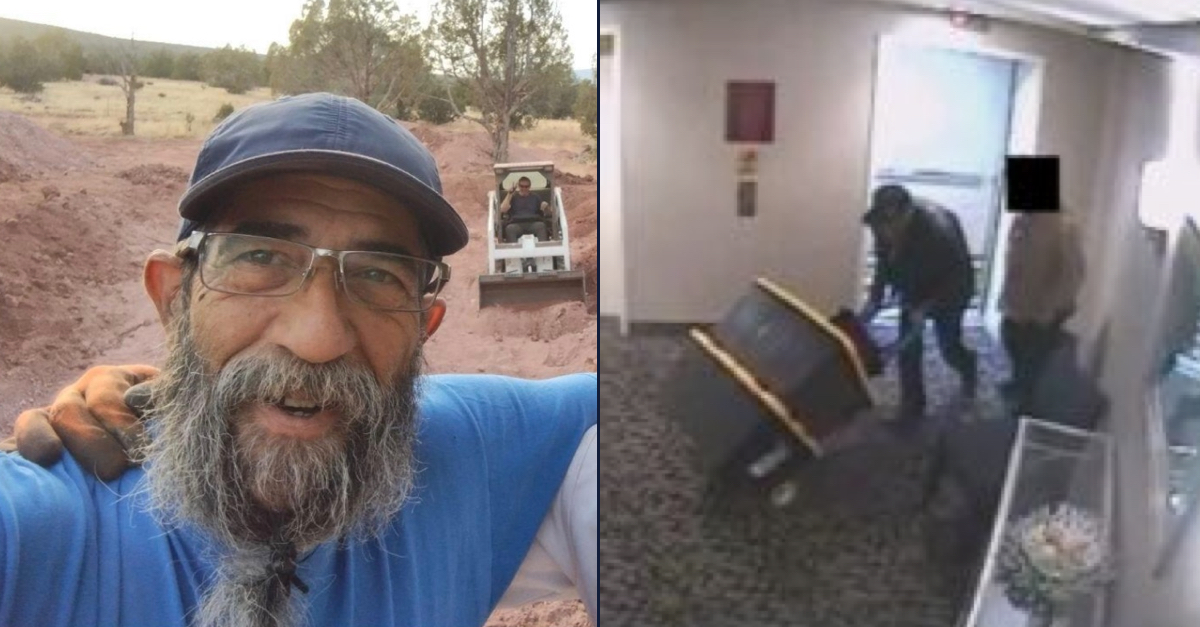 Edward Vallejo in a selfie submitted by his lawyer in support of a request for release from pretrial detention (left); Vallejo allegedly hauling weapons in the Comfort Inn Ballston ahead of the Jan. 6 attack on the U.S. Capitol (left)

An Oath Keepers member jailed earlier this year in the sprawling seditious conspiracy case tried to obstruct justice in a pair of jailhouse phone calls recorded on the evening before his bail hearing, federal prosecutors said.

Edward Vallejo, a 63-year-old resident of Phoenix, Arizona, failed in his first attempt at bail in January, when prosecutors quoted him speaking about discussing the possibility of “armed conflict” and “guerilla war” in a federal indictment.

Acknowledging that Vallejo is not young, Justice Department attorney Louis Manzo told a magistrate judge earlier this year that the suspect was “dangerous.” Vallejo allegedly traveled thousands of miles across the country for the extremist group’s so-called quick reaction force, a subset of members who allegedly waited at a Comfort Inn just outside city limits with an “arsenal” of weapons.

If called by former President Donald Trump, the so-called “QRF” planned to ferry across the Potomac with those weapons, prosecutors say.

“I Think You Will Understand”

On Jan. 19, the night before his bail hearing, Vallejo allegedly found out what prosecutors learned about his activities inside the Comfort Inn Ballston from an unidentified man. Prosecutors say that this caller described a photograph released by the government showing Vallejo rolling a dolly with two bins that the government believes contain weapons.

Their conversation, as transcribed in court papers, reads:

Male Caller: One of the pieces of evidence they added is security camera footage from the Comfort Inn. They are saying it’s Ballston, not [indecipherable] or whatever that Virginia city is. The Comfort Inn Virginia. They have security camera footage of you with a dolly with two of the black bins with yellow lids. They have a few more communications. They have a few more texts around I think you going to Texas to meet up with Stewart. But there is nothing really more substantial and I’ll just say that I’m glad that [PRIOR ATTORNEY] is of the same mind that I am that there are some holes in it. That’s what I left [PRIOR ATTORNEY] a voicemail about.

Later that evening, Vallejo allegedly gave his wife the following instructions in another recorded jailhouse call:

Vallejo: I know part of the conditions of my parole will be no alcohol, no drugs, no this no that, blah blah blah. Go through all of my stuff. Inspect everything and anything that is contraband, give it to [THIRD PARTY].
Wife: Ok. I think I have already done that. I will go through it again
Vallejo: I want you to go through everything. Especially my satchel in the black container with the yellow top.
Wife: Alright
Vallejo: I think you will understand.
…
Vallejo: I don’t want anything that is going to jeopardize anything. Alright? You’ll see what I am talking about. Make sure you look very good through everything. (Emphasis, brackets and ellipses from the filing)

Vallejo subsequently claimed that the bins contained “200 lbs. of food,” a claim that prosecutors argued is debunked by the recordings.

Earlier this month on April 18, Vallejo moved again for pre-trial release, describing himself as a partially disabled veteran, husband of 35 years, father and stepfather. The motion argued that he would pose no danger to the community or flight risk if released to his wife’s custody.

The allegations concerning the jailhouse tapes was filed on Thursday, in order to supplement the government’s case that Vallejo should remain in jail.

“In addition to being a danger to the community, Vallejo appears to be obstructing justice even while held and communicating on a recorded line,” prosecutors wrote, emphasizing those words in the filing. “If released, there are certainly no conditions that can assure that he would not attempt further obstruction.”

Law&Crime requested copies of the recording from the Justice Department, which referred the matter to the court.

U.S. District Judge Amit Mehta’s chambers did not immediately respond to a voicemail seeking the public filings, which were attached as exhibits to the filing.

Later that evening, Vallejo’s attorney Matthew Peed responded through a filing, floating another explanation as to why his 63-year-old client from the Grand Canyon State might ask his wife to spirit away “contraband” from his satchel.

“Given this context, it is easy to guess examples of ‘contraband’ that an older gentlemen with a history of back pain and a distrust of the medical establishment might have stashed away, and why he would ‘cryptically describe’ such remedies,” the defense brief states.

In 2020, Arizona legalized cannabis for recreational use, even though it remains illegal under federal law.

“Important here, Vallejo asked his wife to scour his belongings—not just the black bins—to ensure that any such contraband was eliminated and wouldn’t violate any conditions or ‘jeopardize’ his release,” the brief continues. “Such an effort to ensure complete compliance is to Ed Vallejo’s credit, not evidence of obstruction. That the government cannot see this is yet another example of it becoming stuck in its own guilt-assuming reasoning.”

Peed did not immediately respond to an email seeking to confirm the nature of “contraband” coyly alluded to in the brief.

Read the government filing, below:

The defense filing is here:

Update—April 29 at 9:20 a.m.: This story has been updated to include the defense to the government’s allegations.