‘Unnerving’ Man Questioned After Unsolved Utah Double-Homicide Behaved with ‘Combination of Euphoria and That He’d Been Caught Doing Something Wrong’: Report 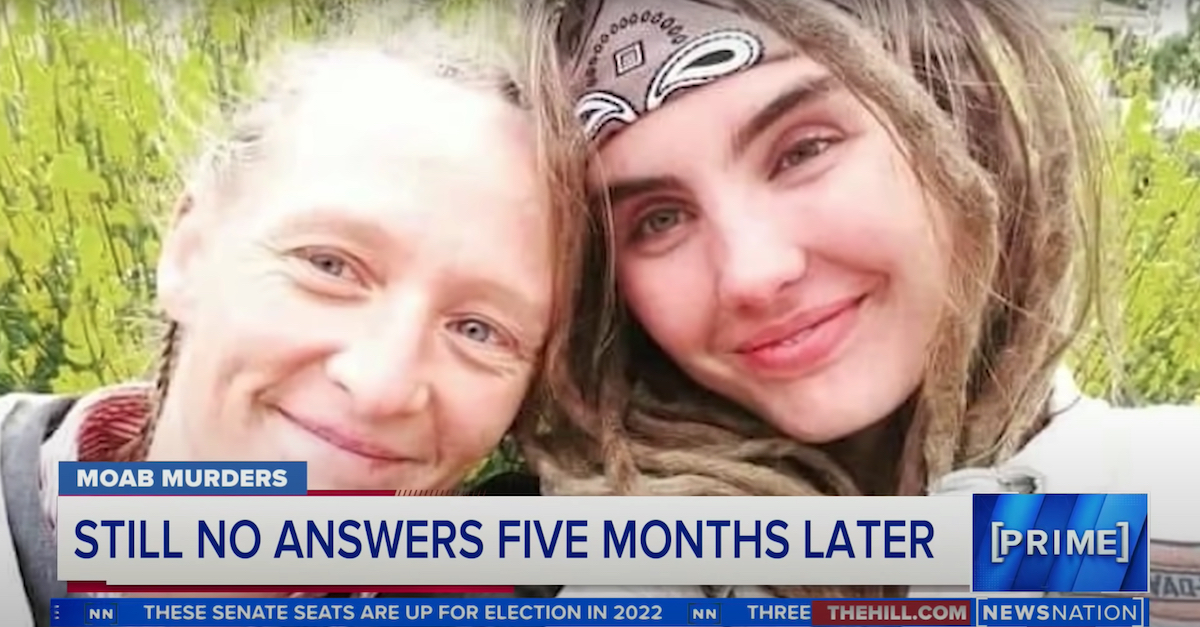 Newly released court documents reportedly confirm that law enforcement authorities in Utah examined a potential lead in the brutal murders of married couple Crystal Turner, 38, and Kylen Schulte, 24, Salt Lake City FOX affiliate KSTU reported.  But it’s unclear what the authorities are doing with some of the information they gathered.

The two women were found brutally murdered at a campsite in August, as previously reported by Law&Crime. Their bodies had been dumped “in an irrigation ditch” just west of their campsites in the South Mesa area of the La Sal Mountains. Authorities determined the victims likely died on Aug. 14, 2021 after both sustained multiple gunshot wounds to the back.

According to the latest reporting, a search warrant unsealed Feb. 18 states that investigators spoke to the couple’s friends and learned that Schulte had told several people about a “creepy man” she claimed had been skulking around their campsite and a nearby town. One of Schulte’s friends reportedly went so far as tell investigators that Schulte said “if something happened to them, they were murdered.”

On Aug. 17, one day before the women’s bodies were discovered, a deputy with the Grand County Sheriff’s Office performed a traffic stop on a 27-year-old man who KSTU reported is “a possible suspect” in the double-homicide. The man reportedly had a Utah driver’s license and was driving a car with Ohio license plates.

The man’s name has not been reported because he is not currently charged with any crime and authorities have not officially named him as a suspect.

According to a search warrant, the deputy was so worried by his interaction with the driver that he could no longer focus on issuing a speeding ticket.

“[The driver] was so unnerving that the veteran law enforcement officer decided not to write the speeding ticket as he did not want to take his eyes off [him],” the warrant reported stated. The deputy reportedly wrote that the driver had “acted oddly for being pulled over for speeding” and described the man’s behavior as “almost a combination of euphoria and that he’d been caught doing something wrong.”

After Schulte and Turner were found dead, police obtained and executed a search warrant on the man’s vehicle and questioned him at the Moonflower Market, where he worked, Salt Lake City NBC affiliate KSL-TV reported. He reportedly only started working at the market on Aug. 16. Schulte reportedly also worked at the Moonflower Market. The man reportedly said he’d interacted with Schulte at the market as a customer but they had not worked together.

Investigators asked whether the man murdered Schulte and Turner and he reportedly responded that he had not. Police reportedly wrote, however, that the man’s “demeanor was similar to people that I have had interactions with who had untreated mental health issues.” Investigators also noted that the man stared “vacantly at the person talking to him,” answered “in non-committal ways,” and “rambled” when asked about Schulte.

“[The man] was asked if all the interactions with [Schulte] were good, [the man] stated that depending on the day the interactions had with other people could be good or bad depending on people’s feelings,” the warrant reportedly stated. “I asked how would react to being rejected or scorned, [the man] again rambled but essentially stated that he would just experience it.”

He reportedly could not account for his whereabouts on the evenings of Aug. 18, 19, or 20 but said he slept in an outdoor spot that was “away from people” and provided police with the location. Authorities searched the spot and reportedly found two blankets and a jacket with a substance that appeared to be blood on it. Per KSL, Turner and Schulte would have had to pass by the spot on their way to their own campsite.

In light of the man’s odd behavior and failure to account for his whereabouts, authorities reportedly wrote that investigators should “explore this avenue of inquiry.”

Several witnesses reportedly told police that they had seen the man around town sleeping in his car. One woman reportedly said she had recently asked the man to leave her place of business because “he makes unwanted advances towards women and makes them feel uneasy.”

It is not clear why the warrant was unsealed on Feb. 18, but KSL reported it “may mean that police are no longer investigating the man listed.”

A second search warrant unsealed Tuesday said that investigators requested information from AT&T regarding a specific phone number belonging to one of the victims, KSL reported.

“As only one cellphone has been recovered we are currently searching for another phone that was known to be possessed by one or both victims,” the warrant reportedly states. “The information stored by the service provider/carrier of this number could provide information about the whereabouts of the phone as well as other information that may lead to a suspect.”

As recently as January, the Grand County Sheriff’s Office responded to online “conjecture” and made clear that Gabby Petito and Brian Laundrie had no connection to the Turner-Schulte double homicide during the summer of 2021. Petito and Laundrie were in Moab, Utah on Aug. 12, 2021 — and it was there that the couple had a suspected domestic incident that ended with cops asking the couple to separate for an evening.

“In the course of this investigation, there has been considerable conjecture that Gabby Petito and Brian Laundrie were somehow involved in the double homicide,” the sheriff’s office wrote in a press release which provided updates into the killings of Schulte and Turner. “Upon investigation, the FBI and Florida Investigators have determined, based on electronic transmission evidence, that neither Petito nor Laundrie were involved in this case.”

Petito was found strangled to death in Wyoming in September; Laundrie was found dead in October in what was ruled a suicide.