‘I Don’t Know if My Parents Are Involved’: Brian Laundrie’s Sister Speaks to Protesters, ABC News

The sister of wanted man Brian Laundrie on Monday evening confronted protesters outside her home on video in a nearly 20 minute discussion obtained by NewsNation. Cassie Laundrie and her husband James Luycx were not pleased by the small assembly — which was widely publicized in the leadup to a formal sit-down interview with ABC News.

Cassie Laundrie revealed that her missing brother flew home after police in Moab, Utah confronted Brian and his fiancée Gabby Petito about alleged domestic violence. And she said the suspense of not knowing the truth about what occurred was tearing her family apart on multiple fronts.

“You’re making my children cry,” Laundrie said. She also accused the protesters of “not helping” the situation involving her missing brother. Brian Laundrie is wanted on charges that he used a debit card presumably belonging to Gabby Petito without permission. Petito and Laundrie were on a cross-country road trip in a white van before she disappeared. Her body was found in Wyoming’s Bridger-Teton National Forest; the manner of her death was immediately classified as a homicide. The precise cause of her death has not been released.

“We have fully cooperated with the police since Sept. 11th when they called,” the sister said during the beginning of the encounter.

“What do you want us to do?” said Luycx.

The dates are important. Petito and Brian Laundrie embarked on an Instagram-laden trip in a white van in June. On August 12, they were captured on body camera video by authorities in Moab, Utah, after a suspected domestic dispute. Petito’s family said they last heard from her during the last week of August.

Richard Stafford, an attorney for the Petito family, told CNN that Petito talked with her mother on Aug. 24 via FaceTime and said she was heading from Utah to the Tetons in Wyoming. Petito then texted her mother on Aug. 25 and again on Aug. 27. Her family believes she was in the Tetons on those dates.  The family received another text on Aug. 30 which said “No service in Yosemite.” According to CNN, the family doubts that Petito sent the text.

Steve Bertolino, a lawyer for the Cassie and Brian Laundrie’s parents, told the Law&Crime Network Tuesday afternoon the Brian flew from Salt Lake City to Tampa to join his family on Aug. 17.  He said Brian flew back to Salt Lake City on Aug. 23.

“To my knowledge, Brian and Gabby paid for the flights as they were sharing expenses,” Bertolino said.  “Brian flew home to obtain some items and empty and close the storage unit to save money as they contemplated extending the road trip.”

Brian Laundrie returned to Florida on Sept. 1. He went camping with his mother and other relatives at the Fort De Soto Campground in Pinellas County, Fla. between Sept. 6 and Sept. 8.  Petito’s family reported her missing on Sept. 11.

During the discussion with protesters, Cassie Laundrie confirmed that her brother was at her home on Sept. 1.

“Yes, he came to this house with my parents in their Mustang,” she said. “Not the van. I did not know that he took that van back. I found out the next day with everybody else. We are just as upset, frustrated, and heartbroken as everybody else.”

Cassie Laundrie later said her brother was with her parents because they were there to pick up her children.

“Do you think they’re involved?” the protesters asked with reference to her parents and Petito’s death. 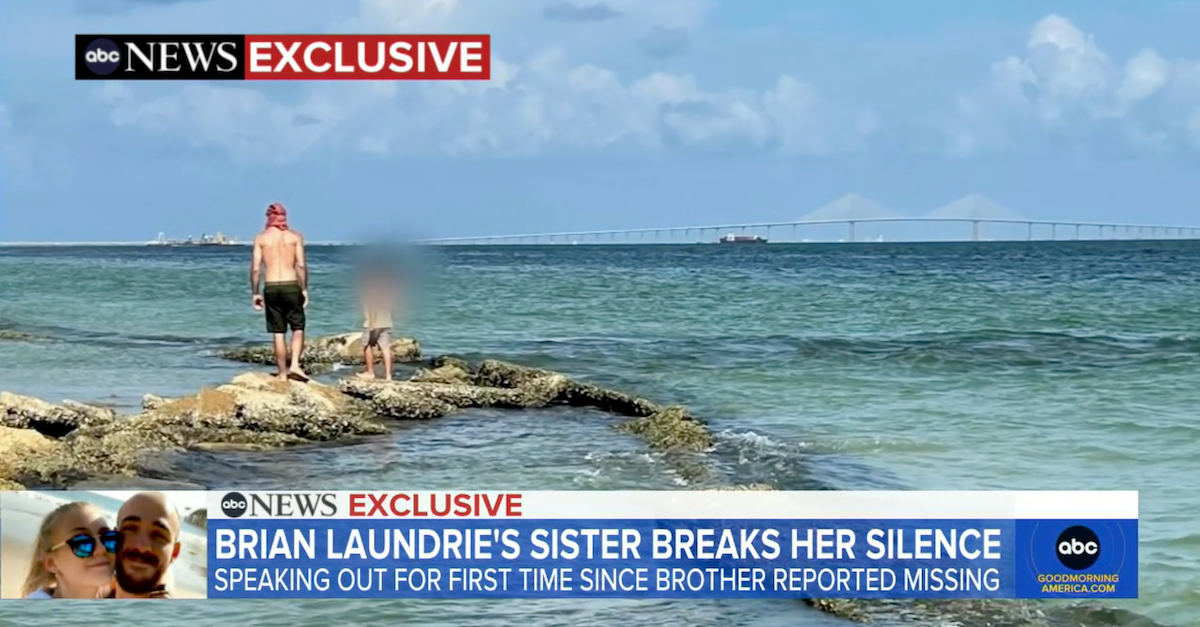 She also confirmed being present with her brother at Fort De Soto on Sept. 6th between 2:00 p.m. and 8:00 p.m. She said she had s’mores and dinner with her mother, father, and brother Brian during the visit and that Brian Laundrie said nothing about his Gabby Petito during their time together. 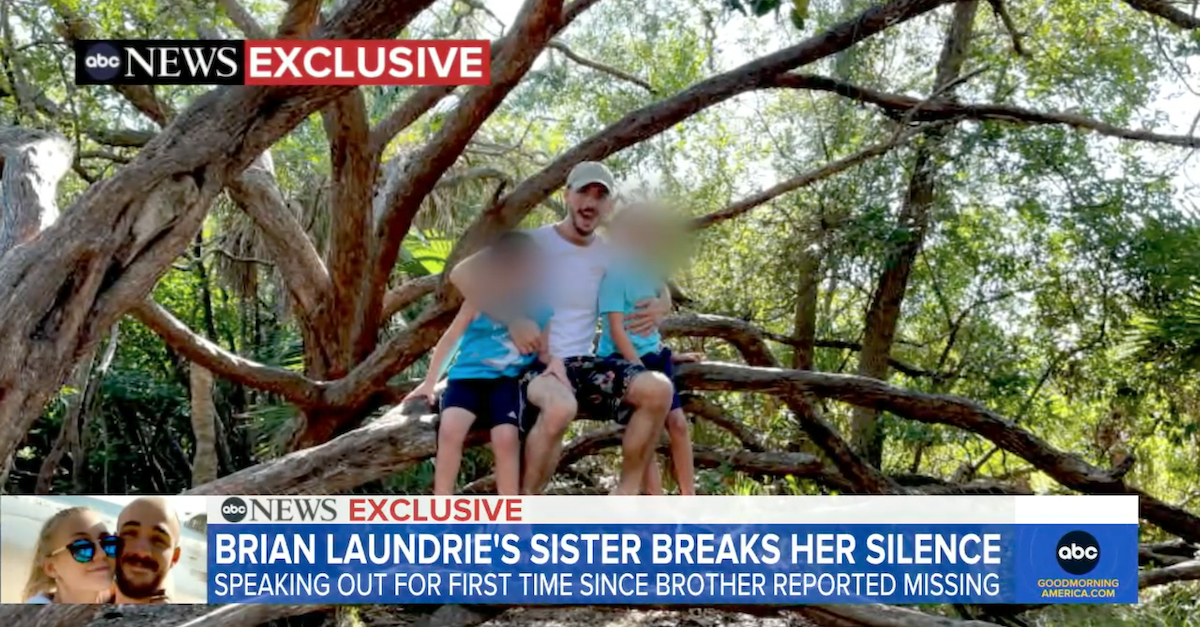 Cassie Laundrie said she has no clue where her brother went after she saw him on the 6th. She complained generally of having her words misconstrued in previous news reports, of speaking to the protesters against the advice of law enforcement, and of her children being “angry and upset.” 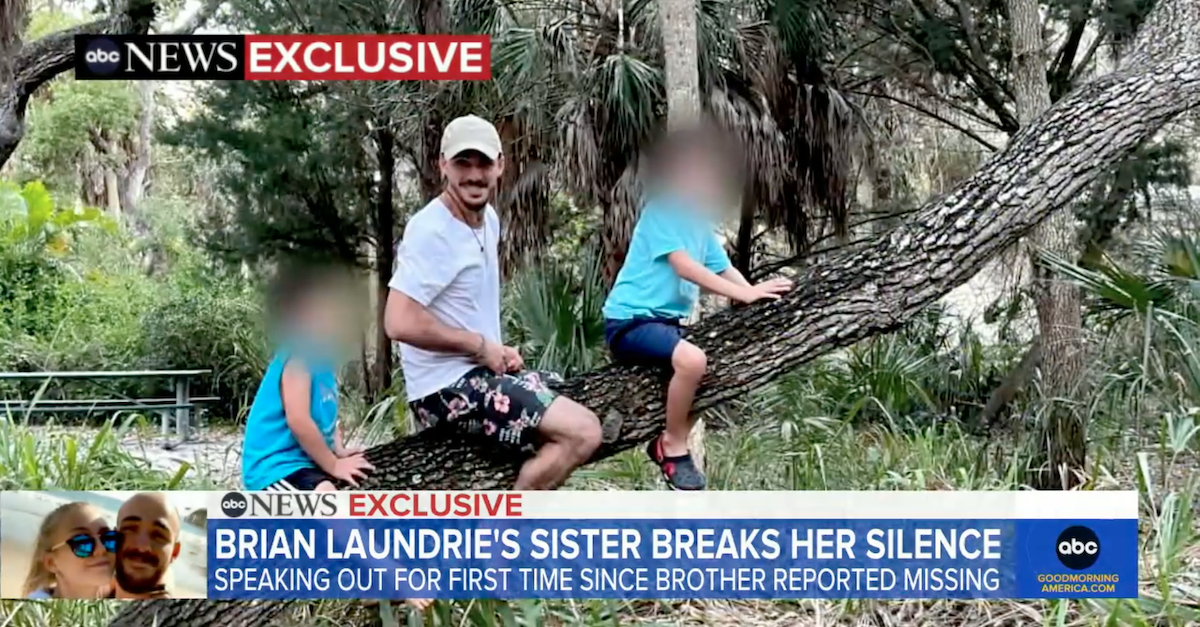 She also said her parents were telling her nothing about what they may or may not know. She said she was being “ignored” by the rest of her family — presumably her parents — and that she was being “thrown under the bus” by her family’s attorney. The protesters gathered outside the home suggested that was no surprise considering Cassie Laundrie was not that attorney’s client.

“Everybody bickers,” Cassie Laundrie said when asked to characterize her brother’s relationship with Gabby. She said she never saw her brother hit Gabby or behave violently toward Gabby or any other woman. But she also noted that there was a significant age difference of eight or nine years between herself and her brother that she was not living at home while her brother was in middle school or high school.

The protesters who spoke with Cassie Laundrie were clearly on Gabby Petito’s side. They said they wanted Brian Laundrie “held accountable for his actions” and said they hoped the Laundrie parents “repent and do what’s right” — thus suggesting that the parents know more than they are letting on. The protester who recorded the interaction was carrying a clipboard containing a picture of Gabby Petito emblazoned with the words “Justice for Gabby.” He also said he wanted “closure for Gabby.”

A female protester suggested Cassie Laundrie and Luycx should “pressure” the parents to “cooperate with law enforcement so we could put an end to this.”

“I’ve got better things to do,” said one protester who had apparently spent days or even longer exerting pressure on the Laundrie family.  “I’m burnt up.  I’ve got chapped lips.”

The man who recorded the interaction said they’d been outside the parent’ home for two weeks.

Some of the protesters told Cassie Laundrie to “change” her public relations “strategy” — perhaps by issuing a public plea for her brother to turn himself in.

On Tuesday morning, Cassie Laundrie made such a plea on ABC’s “Good Morning America.”

The sister Laundrie told ABC News she would turn her brother in if she knew where he was — but that she did not know his whereabouts.  She described her emotions as angry and worried — and that her brother’s disappearance has left the family unfairly reeling from the scrutiny.

She described the Fort De Soto camping trip and completely unremarkable. She’s now blaming herself for not asking more questions or picking up on any subtle clues that something was amiss.

She also told ABC that her brother had taken multi-day trips on the Appalachian Trail — where some claim to have spotted him recently. She further described her brother as a “mediocre survivalist” — but added that he knew just enough to perhaps last in the wild for a “very long time.”

“If the FBI finds him in Timbuktu, I would be like — alright — that’s where he was,” she told ABC.

She added that she’d never seen either Gabby or her brother engage in domestic violence.

“I don’t know if my parents are involved,” she also told ABC — reiterating what she told the protesters.

Even through Cassie Laundrie said she’d tried to call her brother, Luycx said that Brian Laundrie “didn’t like his cell phone to begin with.”

The couple agreed that they hoped Brian Laundrie was alive.

“I don’t know” if Brian killed Gabby, the sister said when asked point blank to speculate about his brother’s possible involvement in something sinister.

An attorney for Cassie and Brian’s parents told ABC News that they don’t know where he is and that speculation that they helped Brian leave the family home or evade arrest was “just wrong.”

Editor’s note:  this piece has been updated after its initial publication to contain comments from Bertolino.