Sheriff’s Office Has ‘Persons of Interest’ in Utah Double Homicide; Says Brian Laundrie and Gabby Petito Were Not Involved 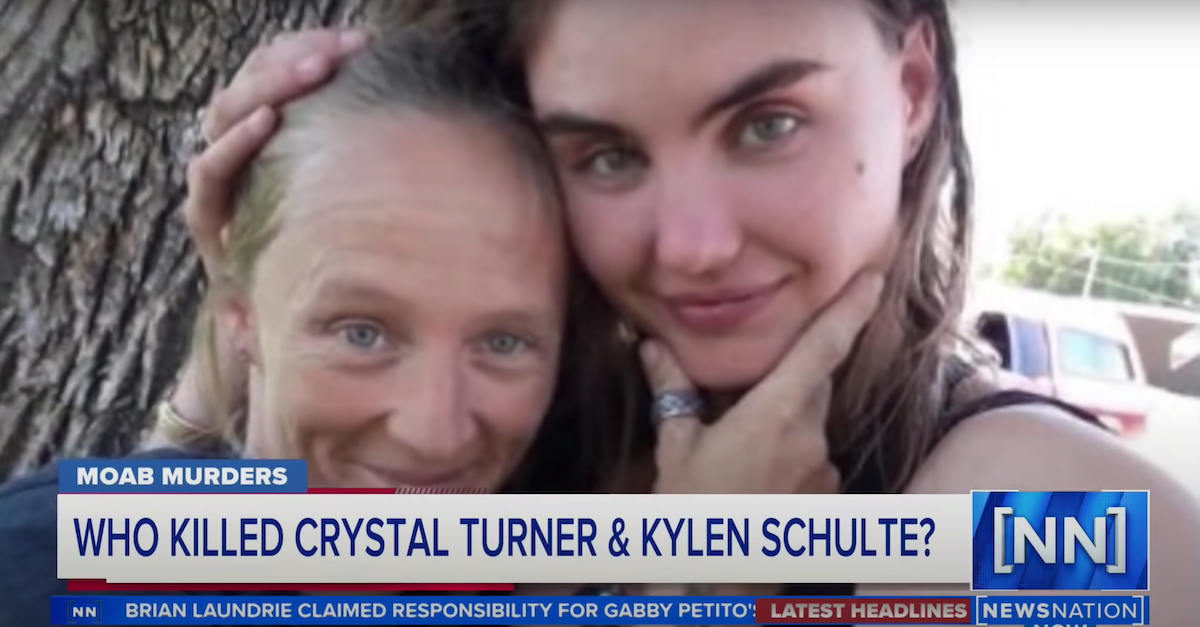 A Utah sheriff’s office based in Moab this week reiterated that Gabby Petito and Brian Laundrie were not involved in an apparently unrelated double homicide during the summer of 2021 — but it said certain persons of interest are on law enforcement’s radar and that the investigation into that separate case remains active.

The Grand County, Utah Sheriff’s Office noted in a press release that Petito and Laundrie have been the subjects of significant online rumors during an investigation into the deaths of Kylen Schulte, 24, and her wife Crystal Turner, 38.  Schulte and Turner were found dead in the area on Aug. 18, 2021.  The sheriff’s announcement came just before federal authorities said Laundrie confessed to murdering Petito in a notebook left near where he is said to have taken his own life in Florida last year.

Laundrie and Petito were in Moab on Aug. 12, 2021.  They crossed the paths of law enforcement during a suspected domestic incident but were ultimately allowed to move along after being advised by local police officers to separate for an evening.

The Sun, a British tabloid, said Laundrie and Petito were caught arguing outside a Moab business where Schulte supposedly worked as a cashier.  Citing Facebook posts, the publication reported that Schulte’s father was curious whether Petito and Laundrie might have been playing pool with Schulte and Turner at a local establishment called Woody’s Tavern.  Schulte reportedly told a friend that she and her wife were having issues with a “creepy” man at the tavern; her father reportedly claimed that the man was part of a “young couple.”  The father reportedly cautioned that he had no idea if the “creepy” man referenced was Laundrie, but he did appear to have serious questions as of late December when the story was published.

Laundrie also reportedly lodged overnight at a hotel “a short drive away from the tavern” when he was asked to stay apart from Petito, according to The Sun.

The precise timeline of the tavern incident and Laundrie’s stay at the hotel were not clearly laid out in the tabloid piece.

Similar claims of a “creepy dude” were discussed in a NewsNation interview with the friend who found the bodies of Schulte and Turner.  Earlier in the investigation, police openly questioned whether Petito, Laundrie, Schulte, and Turner had all crossed paths.

The sheriff’s office this week rubbished notions that Petito, Laundrie, Schulte, and Turner were somehow connected while they were in the remote 5,000-person Utah city last August.

“In the course of this investigation, there has been considerable conjecture that Gabby Petito and Brian Laundrie were somehow involved in the double homicide,” the sheriff’s office wrote in a press release which provided updates into the killings of Schulte and Turner.  “Upon investigation, the FBI and Florida Investigators have determined, based on electronic transmission evidence, that neither Petito nor Laundrie were involved in this case.”

The sheriff then slammed such online “conjecture” as detrimental to the ongoing investigation.

“GCSO request[s] the Moab community be careful about sharing information on social media,” the press release continued.  “Such information tends to be misinformed, inaccurate, and unhelpful to the criminal investigation, if not dangerous.”

Schulte and Turner were found dead on Aug. 18, 2021, “in an irrigation ditch west of their campsites in the South Mesa area of the La Sal Mountains,” the sheriff’s office noted.  Authorities determined that both likely died on Aug. 14.  Both were “shot multiple times.”

The sheriff’s office says it has identified “persons of interest” in the Schulte/Turner killings “but has not yet identified a suspect.”  Evidence in the case includes the victims’ “tent and personal belongings inside and outside the tent.”  It also includes “their vehicle, blood, shell casings, bullet fragments, and video evidence from nearby properties.”  The sheriff’s department said neither victim was sexually assaulted.

Third-party and FBI labs continue to pour over the evidence, the sheriff’s office noted.

Laundrie’s family members and their attorney have previously said he flew home to Florida on Aug. 17 but returned to Utah on Aug. 23.  He was hitchhiking in Utah on Aug. 29 and was dropped off at the Spread Creek Dispersed Camping Area of the Bridger–Teton National Forest in Wyoming — right where Petito’s remains were found weeks later.  He was back in Florida by Sept. 1 and disappeared about two weeks later.  Gabby is believed to have died around Aug. 27.

The Spread Creek Dispersed Camping Area of Wyoming is more than seven hours by car from the South Mesa area of the La Sal Mountains in Utah.

Read the case press releases below: