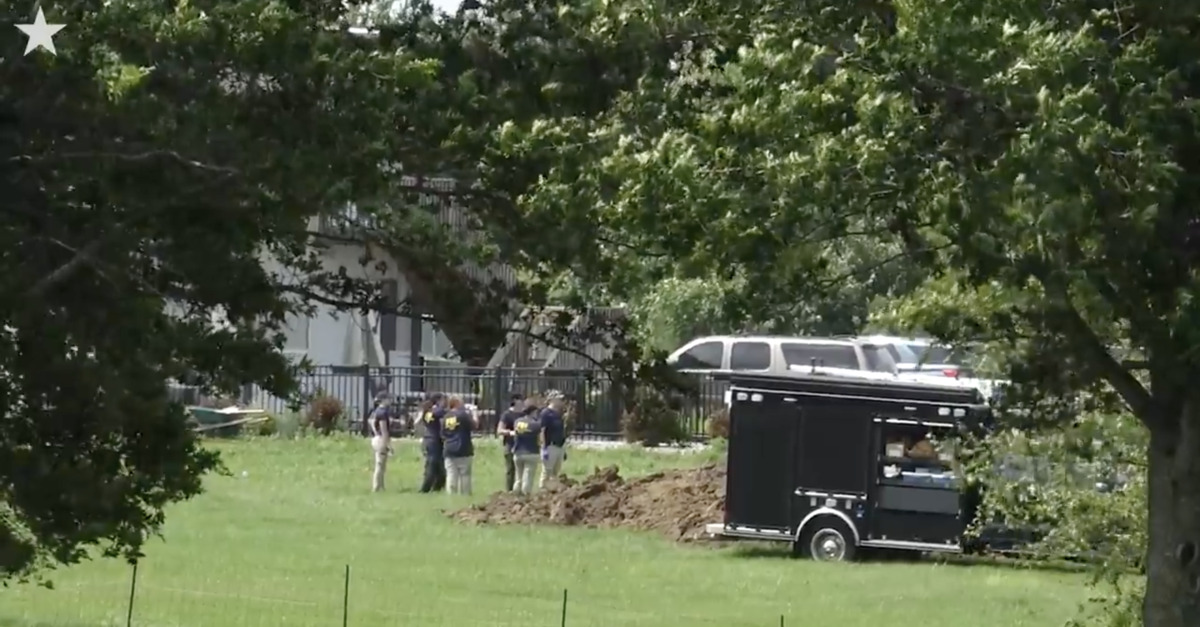 Kensie Renee Aubry, a 32-year-old Texas woman who went missing in October 2020, was found dismembered and buried on the property of an alleged sexual abuser in Missouri late last week.

Michael Hendricks, 40, is already facing several felonies over a sexual abuse case in which he is accused of having sex in front of a child under the age of 14 as part of a ploy to entice her into having sex. Hendricks is also accused of direct molestation in that case for allegedly touching the girl’s vagina through her clothes.

The young girl’s testimony in that case eventually led investigators to the unincorporated property where Aubry’s mutilated corpse was discovered after heavy machinery removed the land from one entire side of the Hendricks home–where the defendant and his girlfriend until recently ran an aviation business focused on helicopter rides.

“There’s nothing I want to do to hinder that investigation at this point in releasing any premature information,” Independence Police Officer John Syme told the press just after the remains were discovered. “There’s a body in the ground. I’m gonna leave it at that for now.”

According to the alleged sex crime victim, Hendricks admitted to killing Aubry after the girl was shown photographs of the dead woman by co-defendant Maggie Ybarra, 30. Ybarra has been dating and working for Hendricks after meeting him at a Narcotics Anonymous meeting, according to Ybarra’s father. Hendricks is reportedly a software developer and network design engineer by trade.

“Maggie showed her photographs on a cellphone of a female with her hands tied, naked and gagged,” a detective wrote in a probable cause affidavit obtained by local ABC affiliate KMBC.

The barely teenage girl said that Ybarra–her former foster mother who was reportedly relieved of her duty over the child after she allowed other sexual partners to abuse her when she was much younger–Hendricks and Aubry “were all sleeping together and Ybarra said that Hendricks ‘choked her to death’ and put her in the freezer.”

“She said that they told her they buried the body,” a detective who interviewed the girl wrote in the court document. “[The teenager] said she knows the area of where [Aubry’s body] is.”

The girl claims that Hendricks admitted to cutting Aubry’s body into pieces with a chainsaw and then putting her remains in a box which was buried near the septic tank on his property. That avenue of alleged disposal was only tried, the girl says, after Hendricks tried to dispose of the body parts by dropping them from a helicopter.

According to police, the teenage girl found her way back to her estranged foster mother in the fall of 2020 after the two reconnected via Facebook. At first the visits were occasional–mostly relegated to nights and weekends. But those visits eventually ramped up and the teenager had reportedly been hanging out with Ybarra and Hendricks “a couple times a week” since late December of last year.

She told police that during a horror movie Hendricks said “it turned him on when people die,” which led to the alleged exhibitionist sex act and eventual molestation, according to local NBC affiliate KSHB.

In May of this year, Ybarra allegedly sent the girl a series of Facebook messages where she disclaimed being a murderer and told the teenager to keep her mouth shut about what she knew, police say.

According to The Kansas City Star, the girl told the detective who took her statement that she wished it was all “just a dream.”

Hendricks and Ybarra are slated for a pre-trial conference on July 20.

Neither have yet to be charged with murder but such charges are widely anticipated to be forthcoming soon, authorities claim.