‘A Celebrity Entourage Is Not a Police Department’: Five of Tekashi 6ix9ine’s Security Guards, Including Ex-NYPD Detective, Indicted for Robbery 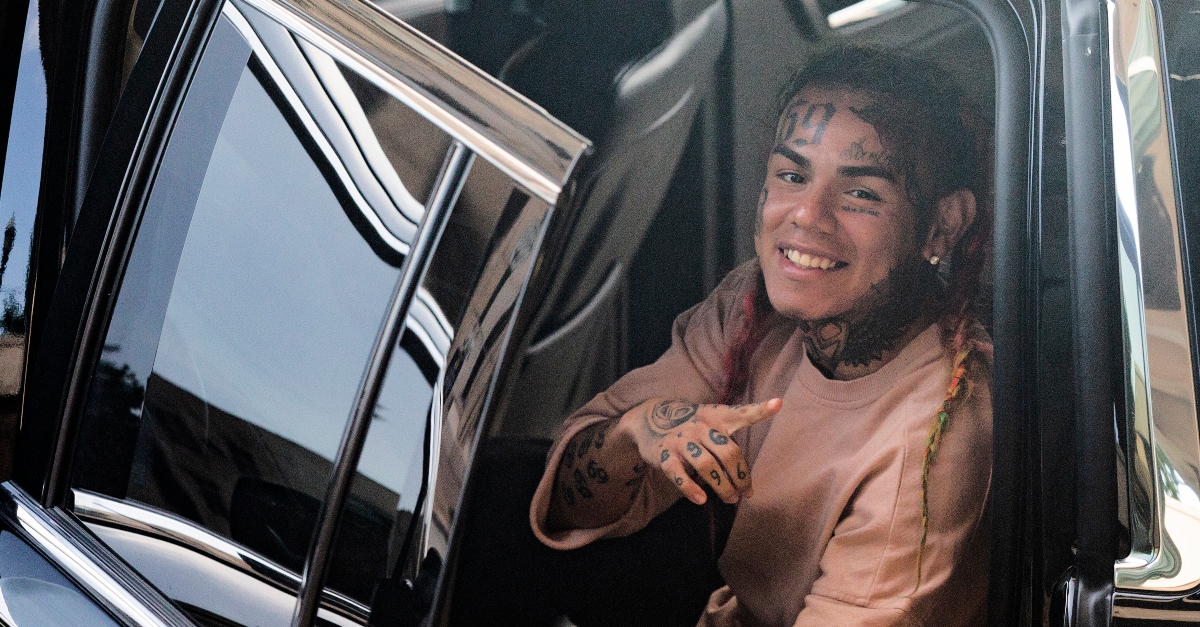 A retired New York City police detective and four other members of disgraced rapper Tekashi 6ix9ine’s security team have been indicted for allegedly chasing a man through Harlem with flashing lights and sirens blaring on their SUVs and robbing him.

Manhattan District Attorney Cyrus Vance announced the robbery and criminal impersonation charges against the five-person security team on Monday. One of them, 44-year-old former NYPD detective Daniel Laperuta, faces an additional charge of falsely reporting an incident in the third degree.

“A celebrity entourage is not a police department, and Manhattan is not the Wild West,” Vance wrote in a statement.

“As alleged, these highly-compensated vigilantes caravanned through the streets of Harlem with sirens flashing in order to track a man down and steal and break his phone,” Vance added. “Along the way, a retired NYPD Detective tried to cover up their conduct by lying to his former colleagues and repeatedly claiming the victim had threatened to shoot them. False reports – especially about firearms – can carry devastating consequences and fortunately, no one was injured or killed in the actual police response.”

Prosecutors claim that the caper began on Aug. 9, 2020, when a 34-year-old and his girlfriend saw the rapper—whose real name is Daniel Hernandez—driving through Harlem.

“When the group saw the victim attempt to record the rapper on his cellphone, they shouted at him and began to chase him as he drove away,” according to the district attorney’s press release, which does not identify the victim. “The team followed the victim for approximately 20 blocks in three SUVs which were equipped with flashing lights and sirens. When the victim attempted to flag down a marked police car, retired NYPD detective LaPeruta flashed a retired NYPD member of service card, told the officers that the victim threatened them with a firearm, and rejoined the chase.”

Laperuta called 911 and falsely reported that the victim threatened the guards with a firearm, prosecutors alleged.

After the team boxed in the victims car with their SUVs at the corner of 125th St. and Adam Clayton Powell Jr. Blvd., Sprouse opened the door of the victim’s car, unbuckled his seat and pulled on his arm, according to prosecutors.

“The victim’s phone was knocked out of his hand to the ground, where Fuhse stomped on it,” the prosecution’s press release states. “The victim exited his car and wrestled with Egardo Cortez in an attempt to recover his phone. Laperuta approached the group with his hand on his holstered gun and Christian Cortez pointed a Taser at the victim. When an unmarked police car approached with flashing lights, the team immediately got into their SUVs and fled the scene.”

Prosecutors claim that Laperuta then went to the NYPD’s 28th precinct to make a complaint, alleging again that the victim threatened the guards with a firearm.

Laperuta withdrew his complaint after an NYPD lieutenant called the claim implausible, according to prosecutors.

The prosecution of Tekashi 6ix9ine’s security team follows years of the rapper’s personal legal troubles playing out in multiple criminal dockets. He pleaded guilty in 2015 to a felony count of using a child in a sexual performance. Arrested for racketeering some three years later, Tekashi 6ix9ine testified against other members of the Nine Trey gang and was subsequently released to home confinement in the wake of the COVID-19 pandemic.

Read the indictment against Laperuta below: