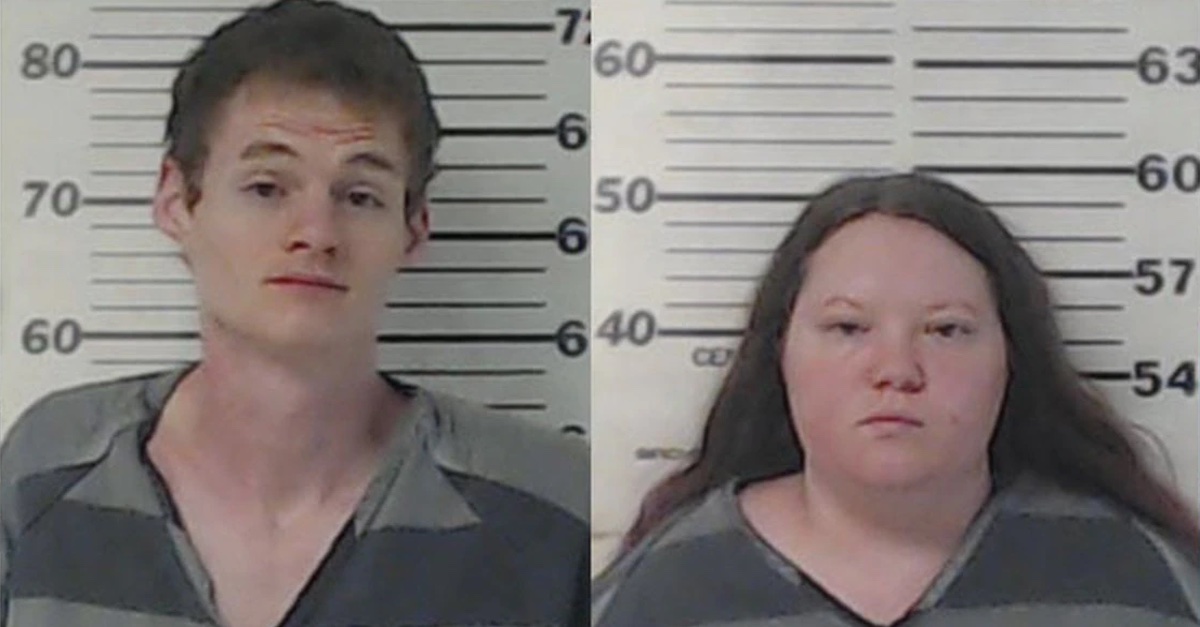 A married couple in Texas are facing indictments after their 18-month-old child was found dead inside his sweltering, feces-filled room and their two other young children were allegedly kept locked in similarly “horrible” conditions.

A grand jury in Henderson County earlier this month returned indictments against Daniel D. Dennis, 25, and Erin M. Dennis, 23, were charged with two counts each of abandoning or endangering a child, court documents reviewed by Law&Crime show.

The charges contained in the indictment stem from injuries sustained by the couple’s surviving 2-year-old and 4-year-old children, both of whom were placed in the custody of Child Protective Services (CPS). Authorities previously stated, however, that they “fully expect” the parents to face charges over the death of their 18-month-old son David Dennis, Tyler ABC affiliate KLTV reported.

According to the indictment, filed March 10 in the 173rd Judicial District Court, prosecutors say the couple did “intentionally, knowingly, recklessly, or with criminal negligence, engage in conduct that placed [victim 1] a child younger than 15 years of age, in imminent danger of death, bodily injury, or physical or mental impairment.”

Specifically, they are accused of “locking [Victim 1] in a room with walls and doors covered in feces” as well as refusing to “voluntarily deliver the child to a designated emergency infant care provider.”

With regards to the second victim, prosecutors allege that they similarly kept the child locked “in a cage in a room with feces, and the defendant[s] did not voluntarily deliver the child to a designated emergency infant care provider.”

Daniel and Erin have remained in detention at the Henderson County Jail since their initial arrest on Dec. 15. Jail records show that a judge set Erin’s bonds at a total of $750,000 while Daniel’s bonds total $1 million.

As previously reported by Law&Crime, deputies with the Henderson County Sheriff’s Office on Dec. 14 responded to a 911 call about an unresponsive baby at a home located on Private Road 7801. Upon arriving at the scene, personnel with the UT Health Emergency Medical Services reportedly told investigators that an 18-month-old child had been pronounced dead inside the home. Though EMS reportedly said the cause of the child’s death was not immediately known, they noted that the room in which they found the toddler’s body was dangerously hot.

“The mother said she awoke Tuesday morning to play video games,” the sheriff’s office said, per Tyler ABC affiliate KLTV. “She then checked on the three children and found the 18-month-old dead.”

In a probable cause affidavit, investigators reportedly noted that the room was equipped with a small white space heater and that the toddler had been “down for a while” by the time they arrived. EMS reportedly said they took the temperature of the child’s room six minutes after arriving and it registered at nearly 100 degrees.

The deceased child’s temperature reportedly registered at 103 degrees Fahrenheit when measured from the boy’s chest and head. The child’s body temperature was particularly odd, since medics on the scene also reported that it was “clear” that rigor mortis had set in to the body, meaning that David was likely dead for at least four to six hours when his temperature registered at the equivalent of a dangerously high fever.

Erin reportedly told investigators that when she put David down to sleep the previous night she didn’t notice anything strange except for a small rash and bug bites.

Upon arriving at the scene, detectives reportedly noted that the condition of the residence was “horrible” with “human feces on the wall and dirty diapers on the floor,” including in the room David shared with his 2-year-old brother.

There were also two cribs inside the room, one of which “had been turned upside with the mattress on the floor and the metal supports across the top creating a ‘cage,’” the affidavit said. The crib was also reportedly surrounded by a fence that completely encircled the structure.

Investigators then reportedly saw the bedroom of the couple’s third child, a 4-year-old girl. When a detective made a comment about the girl’s room having a lock on the outside of the door, Erin reportedly responded that the lock was needed because the child was “an escape artist.”

Inside, the room was reportedly empty except for a crib mattress in the corner of the room. The detective also reportedly said the walls and inside of the door were covered in what appeared to be human feces. Per the affidavit, “a small child’s handprints were visible in the feces” and the room reeked of human waste.

Police said a search of the parents room revealed “several firearms leaning against the wall unsecured.”

The two surviving children were sent to UT Health Hospital where doctors reportedly said both showed signs of trauma and physical abuse. They were both reportedly placed in the custody of Child Protective Services.

“This is one of the worst cases we’ve seen,”  Henderson County Sheriff Botie Hillhouse reportedly said in a statement following the arrests.

See the indictments below.