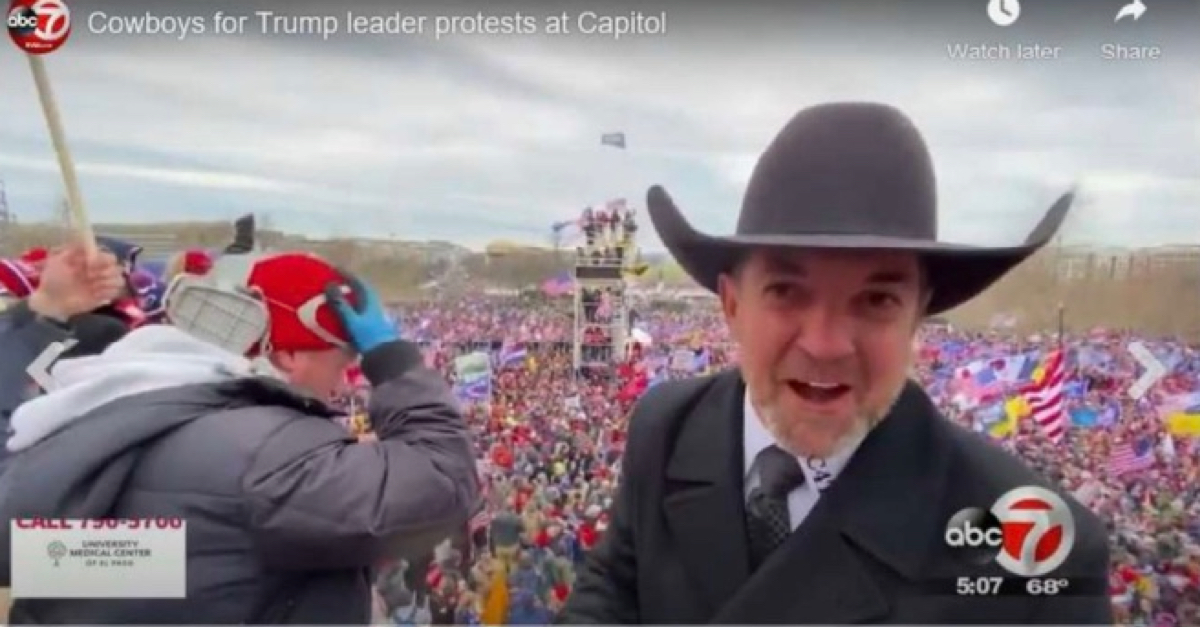 Couy Griffin at the Capitol on Jan. 6 (via DOJ court filing)

A New Mexico county commissioner and the founder of “Cowboys for Trump” has been convicted of one misdemeanor, in connection with the Jan. 6 attack on the U.S. Capitol and found not guilty of a second misdemeanor charge.

Griffin was seen on video apparently using a metal barricade as a ladder to get on to Capitol grounds.

“You can call it a barricade, I call it a step,” Griffin told NBC News on Monday before the trial started.

“You can call it a barricade, I call it a step.” pic.twitter.com/Z6gkRmFvbN

Griffin was arrested in January of 2021, just days after the mob of Donald Trump supporters overwhelmed police and swarmed the building and temporarily blocked Congress from certifying Joe Biden’s win in the 2020 presidential election. He was recorded standing with a megaphone over the crowd outside the Capitol; according to prosecutors, he also lead the group in a prayer.

Prosecutors say he also posted an interview to his Facebook page, in which he stated that he had “climbed up on the top of the Capitol building” and “had a first row seat” to the violence.

He also promised to return specifically for House Speaker Nancy Pelosi (D-Calif.) and Senate Majority Leader Chuck Schumer (D-N.Y.), as well as possibly Trump himself. According to the criminal complaint against him, he said:

You want to say that that was a mob? You want to say that was violence? No sir. No Ma’am. No we could have a 2nd Amendment rally on those same steps that we had that rally yesterday. You know, and if we do, then it’s gonna be a sad day, because there’s gonna be blood running out of that building. But at the end of the day, you mark my word, we will plant our flag on the desk of Nancy Pelosi and Chuck Schumer and Donald J. Trump if it boils down to it.

According to reporter Jordan Fischer with Washington CBS affiliate WUSA, Struck provided the DOJ with “dozens” of videos of Griffin on Jan. 6. One video reportedly showed Griffin appearing to say that Capitol Police had told the crowd not to enter the area being prepared for Biden’s inauguration. In another video, Griffin could be heard saying “Mike Pence sold us out,” according to the report.

Struck testified for the government pursuant to an immunity agreement.

Griffin had tried to argue that the restricted area charge should be dropped, and his legal team said that proving where Vice President Mike Pence was when Griffin entered Capitol grounds was crucial to proving his guilt. Prosecutors opposed the release of that information, but McFadden ultimately ruled for the defense, resulting in the first public testimony over where Pence was during the chaos of Jan. 6. According to reports, Pence and his family took shelter at an underground loading dock while Trump supporters swarmed police above.

McFadden set sentencing for June 17. Griffin faces up to one year in jail.

In August of 2021, Griffin said he had rejected a plea deal from the government.

Griffin, a Republican, was elected to the three-member commission of Otero County, New Mexico, in 2018, winning 65% of the vote against his Democratic opponent. An effort to recall him was launched in after his arrest for his involvement in Jan. 6, but it failed to get enough signatures by the September deadline.

According to the Washington Post, Trump promoted a video of Griffin on Twitter in which Griffin said that “the only good Democrat is a dead Democrat.”

On Monday, Citizens for Responsibility and Ethics in Washington (CREW) filed a lawsuit to remove Griffin from office.

“Couy Griffin breached the Capitol grounds on January 6th as part of an organized effort to halt the certification of a free and fair election. Under the Constitution, those office holders who, like Griffin, violated their oath by participating in or aiding an insurrection, must be barred from public office,” CREW president Noah Bookbinder said in a press release.