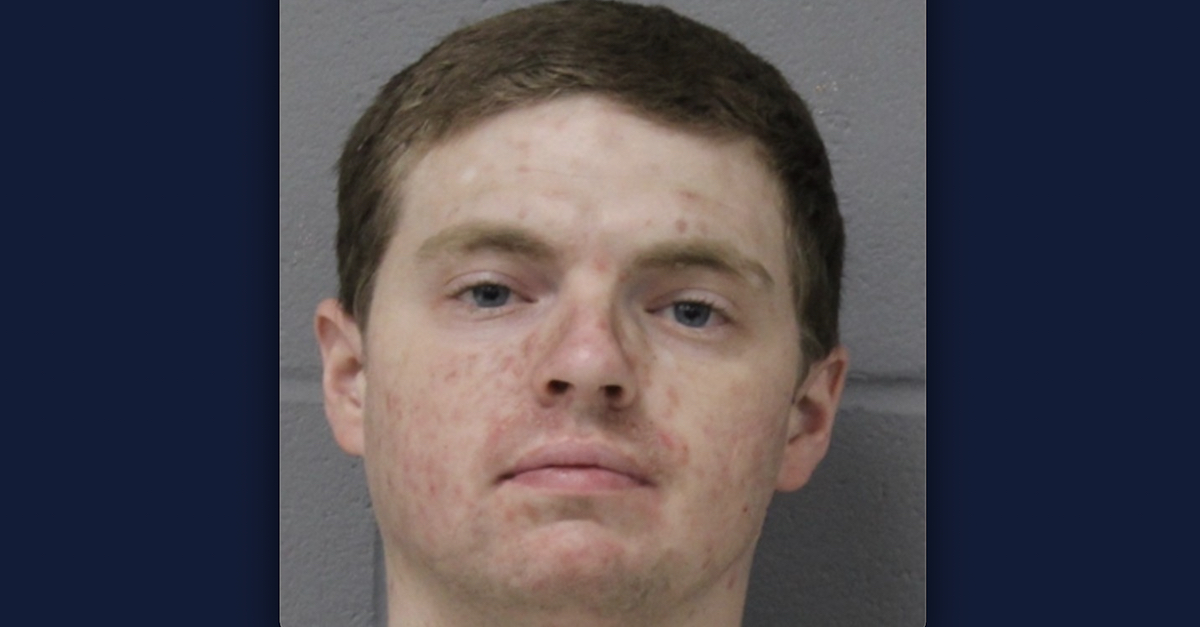 A 27-year-old Texas man was arrested this week for allegedly killing multiple dogs across several different hotels in the Austin area. Tyler Hastings Berry was taken into custody Monday and charged with third-degree felony cruelty to animals, court records reviewed by Law&Crime show.

Berry is also facing an additional four misdemeanor charges, including two counts of cruelty to non-livestock animals, per public records.

In an interview with investigators, Elizabeth Masters, Berry’s girlfriend, allegedly said that he would “regularly get new dogs and puppies from Facebook,” but “the dogs would then just disappear,” police wrote in documents obtained by Law&Crime. Masters allegedly added that Berry’s explanations about what happened to the dogs was “always ‘fuzzy.'”

According to a probable cause affidavit obtained by KVUE, officers with the Pflugerville Police Department on the afternoon of June 28, 2021 responded to a 911 call about a dead pit bull in a bathroom at the DoubleTree Suites located on West 15th Street. The animal’s body was reportedly found by the hotel’s cleaning crew.

Staff at the hotel reportedly told police that the Berry had been staying in the room where the dog was found and had just checked out earlier that day. The dog’s remains were examined by a veterinarian at the Austin Animal Center (ACC). The vet determined that the animal was likely “strangled or partially drowned” approximately “24-48 hours prior to its death,” the affidavit reportedly stated.

“During those 24-48 hours, the dog would have been slowly dying and experiencing an unimaginable amount of pain and suffering, until its eventual death,” the affidavit continued.

In an alarming twist, the incident at the DoubleTree was allegedly neither the first nor the last time that dead dogs were allegedly found in hotel rooms where Berry had been staying.

The affidavit reportedly said that officers recognized Berry’s name from a June 5, 2021 incident at a central Austin hotel where staffers told police they found a “wet deceased puppy” in Berry’s room after he checked out. Berry was never charged in the incident, however, because no officers were ever dispatched to the scene due to “a mix-up in the 311/911 system,” per the affidavit. Police said the puppy’s remains were ultimately thrown away by the hotel staff.

The two additional misdemeanor cruelty charges stem from a third incident that took place in August 2021. According to a probable cause affidavit, officers with the Austin Police Department on Aug. 2 responded to a 911 call about a puppy and hypodermic needles found inside a room at the Hyatt House located in the 10000 block of North Capital of Texas Highway.

The hotel manager told police that Berry had checked into the room on July 30 and checked out on the morning of Aug. 2. A few hours later, the cleaning crew found the puppy, which police said was only six to 12 weeks old, in the bathroom.

According to the affidavit, police “found the deceased puppy on the top of a full trashcan in the bathroom.” Noting that the puppy was “clearly deceased,” police said the circumstances were “almost identical” to the June 28 case at the DoubleTree. The puppy’s body was brought to ACC for a necropsy.

Even more disturbing, police returned to the hotel the following day after staff found “another deceased puppy in that same room.” It was also approximately six to 12 weeks old.

A necropsy determined that both puppies were severely emaciated and had not eaten in at least two to three days. One of the puppies died of “overwhelming parasite infection and inanition (lack of nutrients),” the affidavit states. The other likely had pneumonia and emphysema and showed signs that indicated “suffocation or drowning.”

Police arrested Berry on Aug. 8, 2021 when he tried to check into the same DoubleTree where the dead puppies were found and staff called 911. While officers took him into custody on unrelated charges, when asked about his dogs, Berry allegedly said that they all “must have died from parvo.”

Court records show he is scheduled to appear for a bond review hearing on March 18.