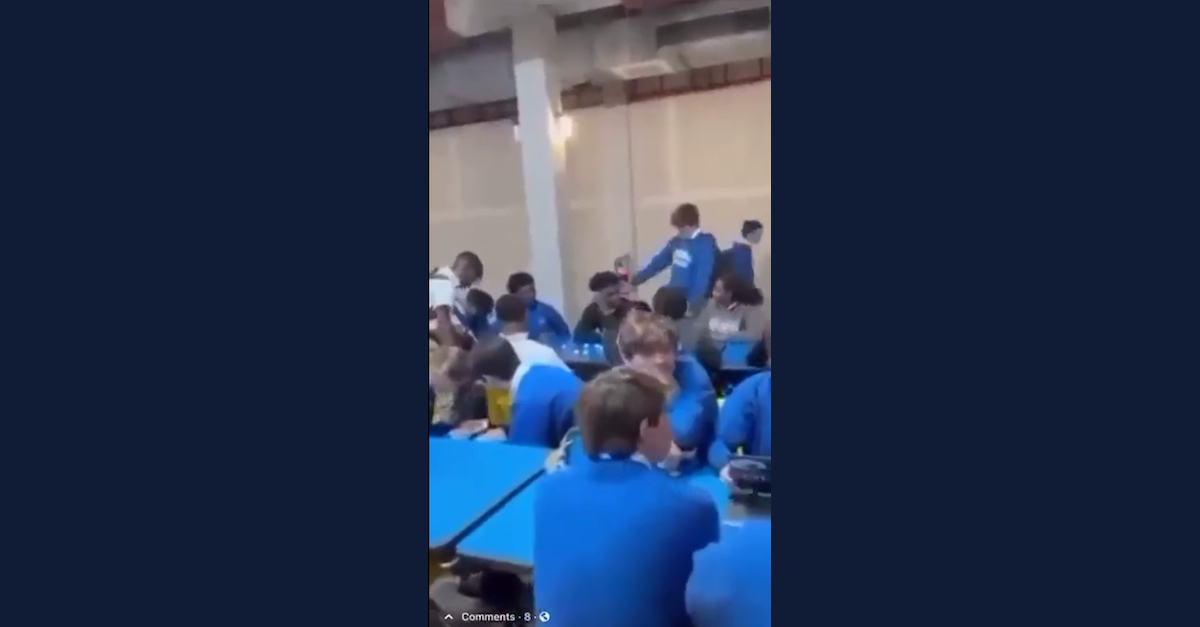 A 15-year-old in Louisiana has been charged with a hate crime after a social media video appeared to show him whipping and throwing cotton at a Black fellow student in a cafeteria, a local sheriff’s office has announced.

In the footage, which was shared on social media, the white student can be seen walking up behind the victim–who was sitting down at the time–and throwing a handful of cotton balls at him. The assailant then repeatedly strikes the Black student with his belt, according to New Orleans CBS affiliate WWL-TV. The recipient of the abuse eventually stands up, grabs his attacker, and pushes him away, backwards, and through a nearby door, according to People magazine.

The incident occurred on March 9, 2022 at the Vandebilt Catholic High School cafeteria in Houma, La.

This is Vanderbilt Catholic school in Houma, LA.

The Black student was sent home.

Tell me again how white youth are not racist like their parents and grandparents 🤔 pic.twitter.com/uQQ6jB5yP2

“The video that appears to be racially motivated was allegedly recorded at a local high school during school hours,” the Terrebonne Parish Sheriff’s Office said in an initial press release obtained by Houma Today last week. “TPSO detectives met with the parents of the victim and an investigation is being conducted. The parents of the victim also met with the school’s administration and they are diligently assisting the parents with addressing this non-acceptable episode.”

According to the sheriff’s office, the white student, a high school freshman, was arrested on March 15, 2022 and charged with simple battery and a hate crime. He was subsequently booked into the Terrebonne Parish Juvenile Justice Center.

On March 10, 2022, the Diocese of Houma-Thibodaux issued a statement against bigotry and bullying; that statement said the “actions by a few are not consistent with the values and mission of our school.”

Law enforcement was quick to thank the administration.

“I’m very pleased that the school took a front stand on this,” Terrebonne Parish Sheriff Tim Soignet said in a press release issued Wednesday. “When we received the complaint, we immediately put our detectives on it. They worked through the weekend so we could get to this point and effect an arrest on that juvenile.”

While neither student is being named, the parents of the alleged victim spoke out in a joint statement which thanked the community for rallying around them; that statement was also obtained by Houma Today.

“We, the parents of the student that was the victim of yesterday’s incident, appreciate the outpouring of support and prayers from our Vandebilt community,” Robert Sandolph and Brandi Sandolph said. “We are pleased that the administrators are working with us during the investigation of this incident. We will continue to pray for our school community as a whole, that we not only get through this together, but that we each learn a valuable lesson from what has taken place. WE ARE VANDEBILT!”

Terrebonne Parish NAACP President Jerome Boykin described the incident as calculated and racist but said the perpetrator still had time to mend his ways.

“This act was clearly something the student thought through to do,” Boykin said in a statement sent to the local paper. “It was a planned act and it was racially motivated. It has no room in our society or in our schools. It’s really unfortunate that in these days and times African Americans still have to endure these racist incidents, especially in our school system. I was glad to hear that the school took swift actions against all who were involved. Unfortunately, racism is alive and well in this parish and in this country.”

A Vandebilt Catholic High student in Lousiana was caught on video throwing cotton & whipping a Black student with a belt! Absolutely disturbing! This incident is NO laughing matter and should never have happened! This student needs to be held accountable for his racist bullying! pic.twitter.com/on6lSdPowE

Citing the juvenile nature of the matter, a representative with the Terrebonne Parish District Attorney’s Office declined to comment when sought out by the New York Times.  The prosecutor, according to the Times, also refused to say “whether the student had been released on bond or whether he had appeared in court.”