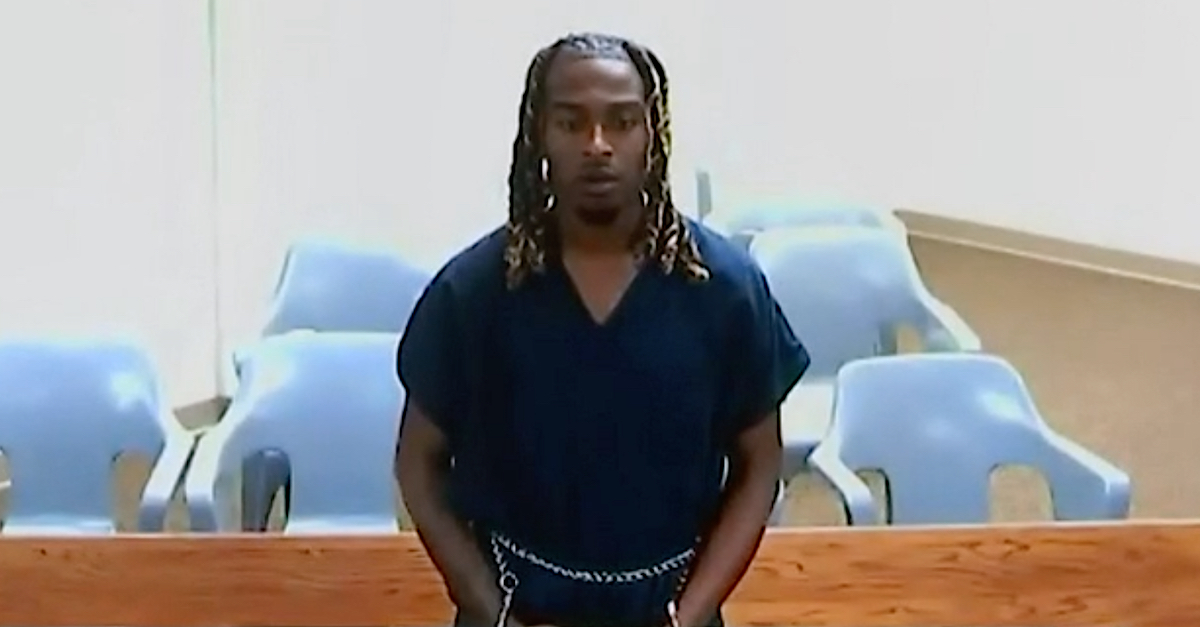 Bryan Rhoden appeared before a magistrate judge via a remote video feed.

A Georgia magistrate judge on Friday evening refused to set bond for an accused triple murderer.

Bryan Rhoden, 23 of Atlanta, appeared in court for the first time in the case at 8 p.m. Friday.  He’s charged with kidnapping Henry Valdez, 46, of Anaheim, Calif., and Paul Pierson, 76, of Topeka, Kan., by binding the men about the “hands, legs, and mouth,” according to a warrant. He’s then accused of shooting the men dead and leaving their bodies in a truck at the tenth hole of the Pinetree Country Club in Kennesaw, Ga., on the afternoon of July 3rd. He’s also accused of murdering golf pro Gene Siller, who the authorities believe stumbled across the already occurring crime.

Much about the case remains unclear, including the details of how and where Rhoden, Valdez, and Pierson allegedly crossed paths.

Police announced Rhoden’s arrest in the triple murder case on Thursday. He’d been taken into custody in a neighboring county on Saturday night, after the men were found dead, but he was released on bond before authorities officially connected him to the slayings.

The Friday court appearance — which a magistrate referred to as “somewhat informal” — largely sought to determine whether Rhoden had an attorney and whether he had seen the warrant which brought about his arrest.

Rhoden was shackled at the hands and around the waist and wore navy prison garb.  He was surrounded by security officers during the remote video hearing.

“The only defendant current[ly present] is Mr. Rhoden, is that correct?” the judge asked

“I was told you were represented by counsel, Mr. Rhoden?” the judge then queried.

Rhoden then said he had a chance to speak with this counsel, though none was by his side.

“There are no attorneys present. Have they agreed that we can proceed with this, um, with just talking to Mr. Rhoden directly?” the judge asked.

“Um, I believe they filed the motion or the paperwork they needed to,” Rhoden said, “but they’re just not here right now.”

The magistrate told Rhoden he would not be asked to make statements about the case. He then asked if Rhoden had seen the warrant document.

“Uh, the one explaining my charges?” Rhoden asked in return.

“Yes, your honor,” the defendant said — answering his own question.

He then declined the judge’s offer to read the warrant aloud.

The judge said the next available date for a bond hearing was July 27th.

Rhoden said he had no questions about the process as it was playing out.

Formal charging documents had not been filed in a public court database as of Friday afternoon.

Rhoden is charged with three counts of murder, three counts of aggravated assault (for pointing a gun at his alleged victims), and two counts of kidnapping Valdez and Pierson.  He has not issued a plea; that will come at a future proceeding.

Read the warrant below: