His Helmet and Tactical Vest Read ‘PRESS,’ But He Just Went to the U.S. Capitol to Storm It, Feds Say 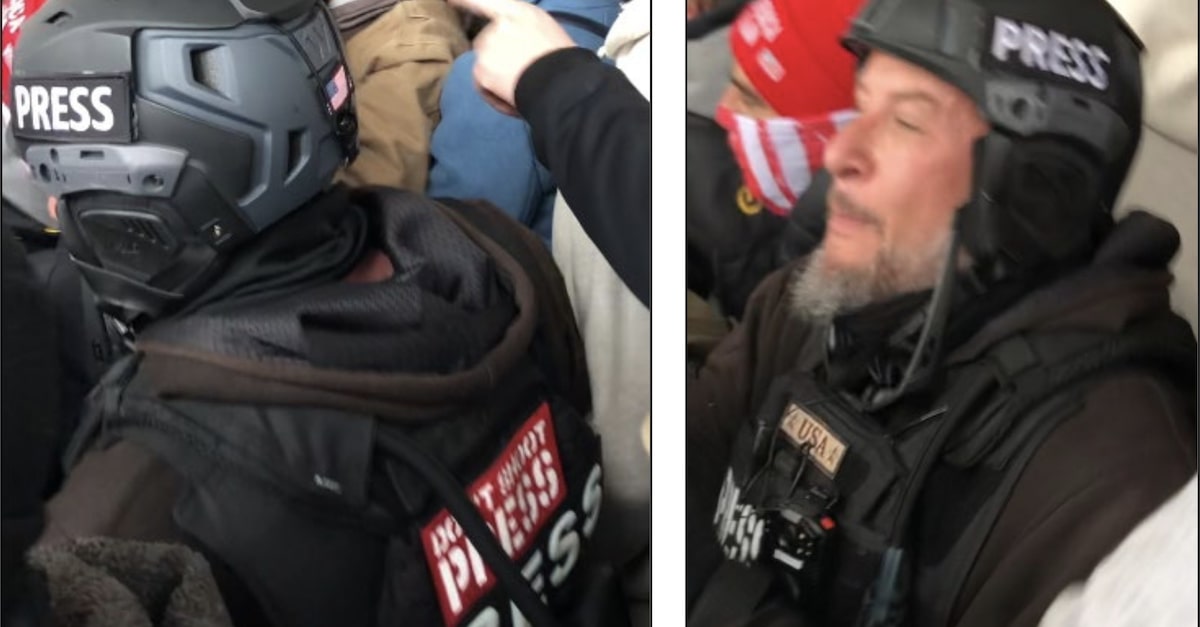 Prosecutors claim that Matthew Thomas Purse posed as a member of the press in order to storm the U.S. Capitol on Jan. 6, 2021.

A California man spotted wearing a black helmet and tactical vest emblazoned with the word “PRESS” used that outfit as a subterfuge to storm the U.S. Capitol on Jan. 6th, federal prosecutors claim in a recently unsealed complaint.

Court records show that prosecutors initially attempted to arrest Matthew Thomas Purse, from Irvine, California, in mid-June, only to be rebuffed by U.S. Magistrate Judge G. Michael Harvey, who had not been satisfied that he was not a member of the press.

In a memorandum opinion dated June 15, the judge found that the government’s application did “not provide an adequate factual basis to find probable cause to believe that Purse had the requisite intent for some, if not all, of those crimes, especially given his markings as a member of the press (whether he meets the government’s definition of ‘being associated with the press’ or not) and the lack of any statements or actions by him that he was anything other than an observer of the events at the Capitol on January 6th.”

A little less than a two weeks later, prosecutors filed a sealed complaint, and they succeeded in securing an arrest warrant on Friday. The unsealing of Purse’s charges was first reported by BuzzFeed News. Purse faces four federal charges: entering and remaining in a restricted building, disorderly and disruptive conduct in a restricted building, disorderly conduct in a Capitol building, and parading, demonstrating, or picketing in a Capitol building.

The FBI agent who signed the affidavit supporting his criminal complaint wrote that he “does not believe that Purse is a member of the press media or associated with having press credentials related to the U.S. Capitol.” The agent quoted a confidential source telling the government that Purse “seems to admit he is not with press,” in his since-deleted livestream.

“Mission accomplished, we broke into the Capitol,” Purse said on the livestream, the informant allegedly told the FBI.

The government says that Purse does not have press credentials.

“Moreover, [the FBI agent] could not find any employment history for Purse for the last six years while Purse has resided in California, or any employment history ever related to any news media organization,” a footnote of the affidavit states. “Although Purse has a website, the website appears to be primarily used for livestreaming and does not contain original content.”

Prosecutors say that Purse entered the U.S. Capitol around 2:59 p.m., carrying a long black pole with what appeared to be a recording device at the end of it.

Some 13 minutes later, Purse exited the building at 3:12 p.m., according to the affidavit.

The docket in Purse’s case, which does not yet list a defense attorney, states that authorities arrested him on Friday. His prosecution falls at a time when authorities executed a flurry of arrests against people accused of assaulting journalists while storming the Capitol. One, 43-year-old Shane Jason Woods, has been accused of knocking down a cameraman and assaulting a police officer. Another, Joshua Dillon Haynes, allegedly destroyed journalists’ equipment.

“They had to run away from us and leave all their equipment so we destroyed it,” Haynes texted an associate, according to court documents. “i Kicked the fake news ass.”

By the Washington Post’s count, five such cases involving attacks on the media on Jan. 6th were charged in a little more than a week. More than 165 people have been charged with assaulting or resisting police officers.

Read the FBI’s affidavit against him, below.

(Photo from the FBI’s affidavit)