Man Chased and Rear-Ended His Girlfriend on Highway, Then Died in a Wrong-Way Crash: Authorities 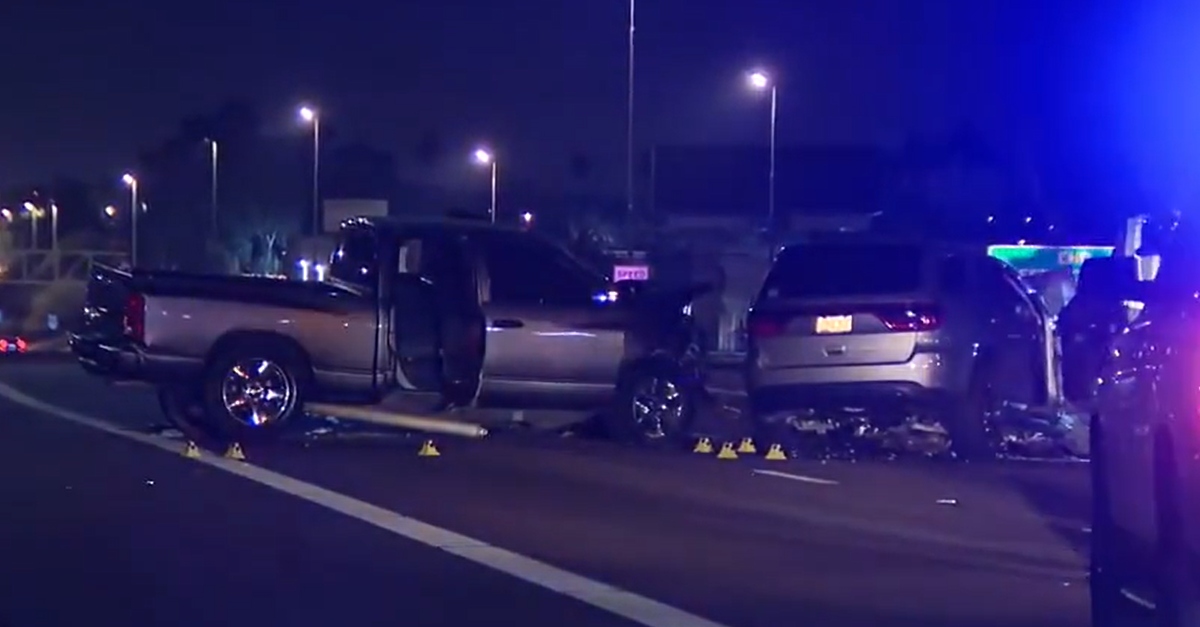 Aftermath of the crash.

A “traumatic” attack ended in death, but not for the victim, authorities say. A man died in a wrong-way crash after he chased and rear-ended his girlfriend on a highway, according to the Arizona Department of Public Safety in a KSAZ report.

Officials did not name anyone involved in the incident from 1:30 a.m. on Thursday in the westbound lanes of Interstate 10 near 27th Avenue in Phoenix. They did say, however, that the dead man had made “contact” with the girlfriend’s vehicle. Investigators said they are not sure if he meant to go the wrong-way in his truck before colliding with a separate SUV. The girlfriend was not physically hurt, though the male driver of the SUV did get a severe, if non-life-threatening injury.

“There was an altercation with his vehicle and his girlfriend’s vehicle, and they did have contact,” a DPS spokesman said, according to the outlet. “We don’t know at this point if he intentionally went [the] wrong way, or if there was an accident, and he was struck by that third vehicle. The girlfriend did not suffer any physical injuries, obviously very chaotic and a traumatic event for her. The male driver of the SUV who was a victim of the wrong way, he suffered a severe injury, it does not appear to be life-threatening at this time. He was transported to a local hospital.”

Authorities in Arizona say a driver who chased and rear-ended his girlfriend multiple times on a highway died after his truck turned the wrong way and crashed into an SUV. https://t.co/HTtT3WCmqd

Authorities did not specify what preceded the dead man allegedly chasing and rear-ending his girlfriend’s vehicle.