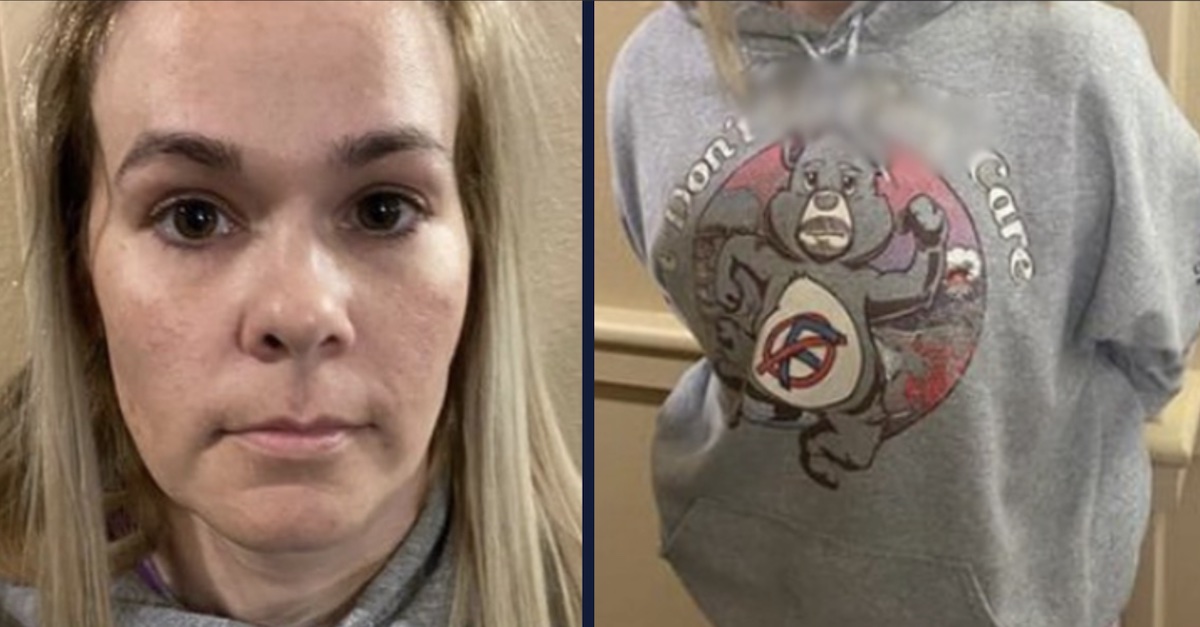 The Livingston County Sheriff’s Office in Missouri announced that 41-year-old former respiratory therapist Jennifer Anne Hall was arrested in Kansas on Thursday evening in a murder case connected to the death of a patient in 2002.

Authorities did not release more information about the circumstances of Hall’s arrest.

FOX 4 reported, however, that Hall’s last known address was in Overland Park, Kansas. KCTV’s reporting on the development indicates that authorities initially posted images of Hall online after her arrest. One image showed a close up of her face and the other showed her wearing a hoodie with the words “I don’t fucking care” crowning an angry Care Bear whose symbol is an “F” inside a general prohibition sign.

Although the image is partially blurred, there is no doubt that those are the words on the hoodie—which is easily found online.

As Law&Crime previously noted, probable cause documents cited by NBC affiliate KSHB said there was an alarming rise in cardiac collapse incidents at Hedrick Medical Center in Chillicothe, over the course of Hall’s brief employment two decades ago, spanning from December 2001 to May 2002. There were reportedly 18 such incidents, and nine of them proved fatal.

Hall was placed on administrative leave and her employment was over after 75-year-old Fern Franco’s May 2002 death, which authorities say was due to succinylcholine poisoning. Authorities base that on the ruling of experts in medical serial killers.

“Because of Hall’s singular proximity to stricken patients, her access to pharmaceuticals which are deadly if misused, and her discovery and method of notifying staff of every patient’s cardiac emergency, nursing staff believed Hall was responsible for the patient deaths,” Chillicothe Police Officer Brian Schmidt wrote in the probable cause affidavit, a copy of which was also obtained by St. Louis Public Radio.

Hall has previously denied responsibility for the deaths at Hedrick Medical Center.

“My name is just thrown out there, and it’s for horrifying reasons,” Hall said.

“It is absolutely devastating to my client and her family and myself, frankly, to have a case that is without merit whatsoever and based on conjecture and speculation,” Hall’s longtime attorney Matthew O’Connor told the local NPR affiliate in response to news of the charges. “This isn’t lawyer talk — there aren’t facts in support of it because Ms. Hall did not commit these acts.”

“This case is based on the hindsight of people looking at issues in their own hospital and when Ms. Hall’s prior wrongful conviction came to their attention, they started pushing pieces toward her,” he added. “They’ve tried for years to find evidence and it didn’t even rise to the level of a civil case, which is a much lower standard. The Missouri Supreme Court has thrown this case out at a civil level.”

The “prior wrongful conviction” O’Connor was referring to related to a fire at another hospital.

In 2001, Hall was convicted of setting the fire. Thereafter, she served a year in prison before her conviction was appealed on ineffective assistance of counsel grounds. A second trial ended in acquittal.

In another interview, the defense lawyer said Hall didn’t have access to the drugs “found in the decedent’s body.”

Law&Crime reached out to O’Connor for comment on his client’s arrest.