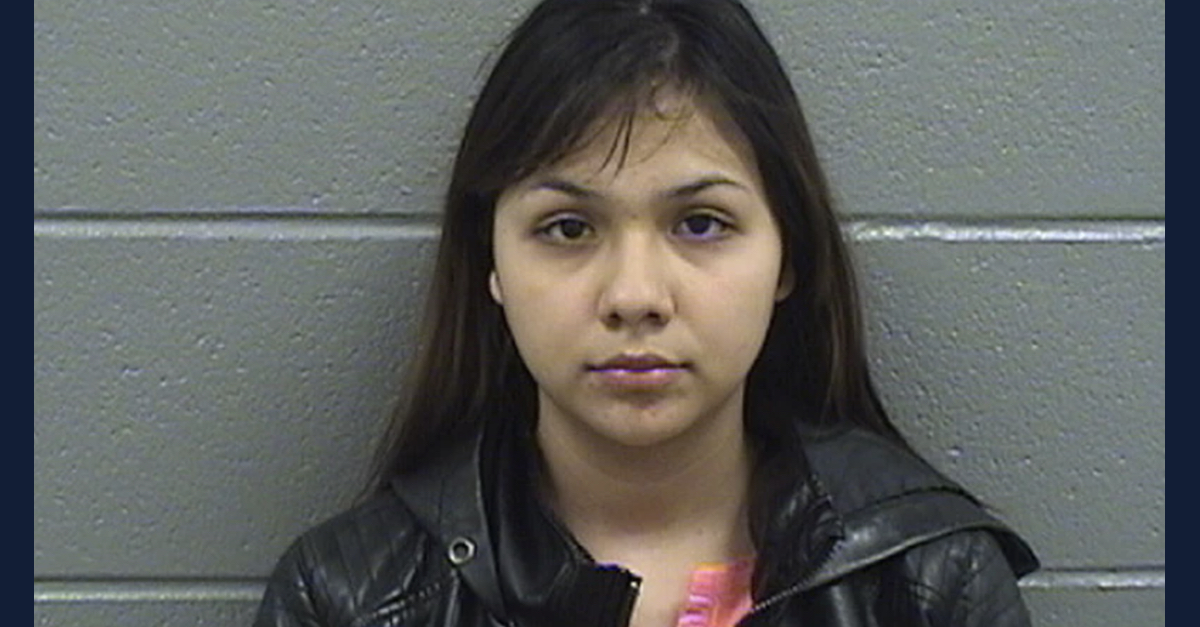 A Chicago woman who watched her then-boyfriend slaughter six members of his own family during a robbery in February 2016 was sentenced to spend 25 years in prison on Tuesday.

Jafeth Ramos, 25, was along for the ride when Diego Uribe, 28, brutally slaughtered several generations of his extended family – including two children – at a residence on South California Avenue.

As Law&Crime previously reported, the victims were bludgeoned, shot, and stabbed to death. Their bodies were left inside for two days before the Chicago Police Department made the gruesome discovery.

Uribe was convicted on six counts of murder in early October of this year. He was sentenced to natural life in prison in early November.

Ramos struck a plea deal with prosecutors last year, according to independent Chicago-based TV station, WGN-TV. In late September of this year, she testified during her ex-boyfriend’s murder trial for some two hours, according to the Chicago Sun-Times.

“Jafeth Ramos did play a major part in the prosecution in that she was able to walk the jurors step-by step through the events that happened,” Cook County State Attorney’s Office First Assistant Risa Lanier said in comments reported by WGN-TV.

On the night of Feb. 6, 2016, Ramos and Uribe were on the way back from a medical clinic when the killer said they would be making a pit stop at his aunt’s house and would “come back with some money.”

Once inside, the two were invited to join the family for dinner as they were all waiting to sit down and eat. Uribe asked to speak with his aunt upstairs first. When he got her alone, he pulled a gun on her and demanded money. At first, she laughed, according to a Chicago Tribune account of Ramos’ testimony before Cook County jurors.

The laughter quickly turned to a realization from 32-year-old Maria Martinez that her nephew was serious, Ramos continued, and then a struggle for the gun. The man won out and shot his aunt in the forehead. Then he continued shooting. Soon enough, his uncle, Martinez’s brother, 38-year-old Noe Martinez Jr., rushed upstairs. Uribe first pistol-whipped him until he fell and then suffocated him to death with his knee on his throat.

Rosaura Martinez, the 58-year-old mother of the two siblings, was next. Uribe pushed her down the stairs. As she lay injured, he stabbed her to death. Then he stabbed his aunt’s two sons – 13-year-old Leonardo Cruz and 10-year-old Alexis Cruz – until they died.

“I just want to live,” the elder of the two boys said as he was murdered by his cousin, according to Ramos’ testimony.

Arriving home some time later with dinner for his family was 62-year-old Noe Martinez Sr. The couple waited for him. As the eldest Martinez made his way inside, Uribe stabbed him to death as well.

During his trial, Uribe’s defense attorney floated a theory that “four masked men” were responsible for the slayings – arguing that it was impossible for just one man to single-handedly murder his entire family. Jurors, buoyed by the state’s deal with Ramos and her admission to watching it all unfold, disagreed.

The defendant, originally charged with murder as well, ultimately pleaded down to one count of armed robbery. Prosecutors suggested the 25-year sentence which was accepted by a judge. She must serve 85-percent of her sentence before she is eligible for parole.

According to WGN-TV’s coverage of her sentencing hearing, Ramos is currently seeking over three years’ worth of credit, similar to time-served credits, for educational programs she has completed while detained.