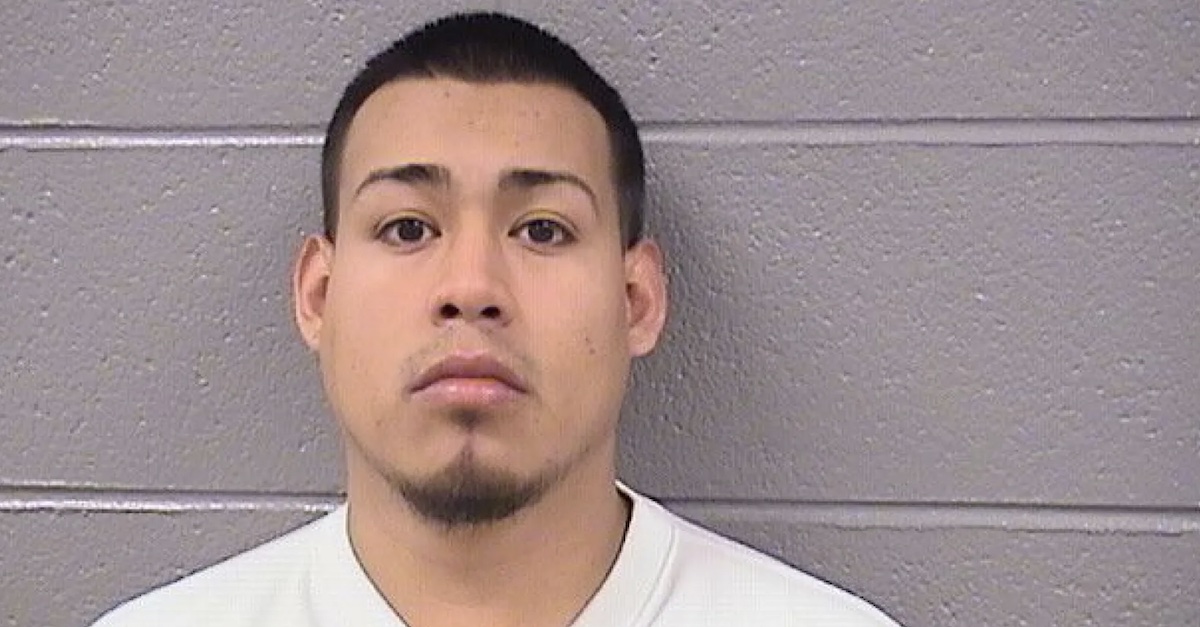 A 28-year-old Illinois man faces spending the rest of his natural life behind bars after being convicted of killing half a dozen members of his own extended family.

A Cook County jury on Wednesday found Diego Uribe guilty on six counts of first-degree murder in the horrific 2016 mass slaying that counted two children among the victims, the state attorney’s office confirmed to Law&Crime.

According to a report from the Chicago Sun-Times, the jury deliberated for more than 10 hours over the course of two days before returning the guilty verdicts.

Details of the massacre sent shockwaves through the Chicago area when they became public.

In the Gage Park murder trial of Diego Uribe, jurors viewed graphic crime scene and autopsy photos from the scene at 5708 S. California in Chicago. https://t.co/ZHviUNm2RL

The victims had reportedly been bludgeoned, shot, and stabbed to death, then left in the home for two days.

At the trial, which began last week, prosecutors reportedly said that Uribe went to the Gage Park bungalow to steal money, but the robbery “spiraled out of control,” and eventually turned into a mass murder. Investigators were quickly convinced that the victims knew the killer, reportedly because none of the victims were restrained.

“The reason that this happened is because of trust. Because he was family, he was able to do that,” Assistant State’s Attorney Patrick Waller reportedly told jurors during closing arguments.“It’s never going to make perfect logical sense, but the bottom line is he wanted money.”

Prosecutors reportedly provided evidence that Uribe and his then-girlfriend, Jafeth Ramos, went to the home with the intention to rob Uribe’s aunt and her family. DNA evidence and cell phone records reportedly confirmed that Uribe was at the home during the time of the killings.

Ramos, who struck a plea deal with prosecutors, reportedly testified last week for almost two hours, telling jurors that she watched in horror as Uribe killed each individual in the home.

She reportedly said that they were driving back from a medical clinic when Uribe told her they were going to be taking a detour to his aunt’s house, saying they would “come back with some money,” the Chicago Tribune reported.

The family was going to have dinner. When Uribe and Ramos got to the home, the victims invited them to eat with them. Ramos said Uribe asked to speak with Maria Martinez in her bedroom upstairs. Once there, he reportedly pulled a gun on her and demanded money.

“Martinez laughed in response, Ramos recalled, but upon realizing Uribe was serious, began to grab for the gun and struggle with him for it. Uribe then shot her in the forehead and several more times,” according to the Sun-Times account of the testimony. “When Martinez’s brother, Noe Martinez Jr., 38, tried to come up the stairs, Uribe pistol-whipped him until he fell to the floor and pinned his knee to Noe Martinez’s throat until he stopped moving, Ramos said.”

Ramos reportedly said Uribe pushed Rosaura Martinez down the stairs, then stabbed her and the two children to death. Noe Martinez Sr. was reportedly the last to die, as Uribe killed him when he came home with dinner for the family.

Uribe’s defense attorneys reportedly argued that her client could not have single-handedly taken out all six family members without anyone being able to call 911. In opening statements, they reportedly suggested that four masked killers were responsible for the murders, but no evidence was provided to support that theory.

Ramos reportedly pleaded guilty to one count of armed robbery, with prosecutors agreeing to suggest she serve a 25-year prison sentence.

Uribe is currently scheduled to appear before Judge Carol Howard on Nov. 7 for his sentencing hearing. He faces a maximum sentence of life in prison.