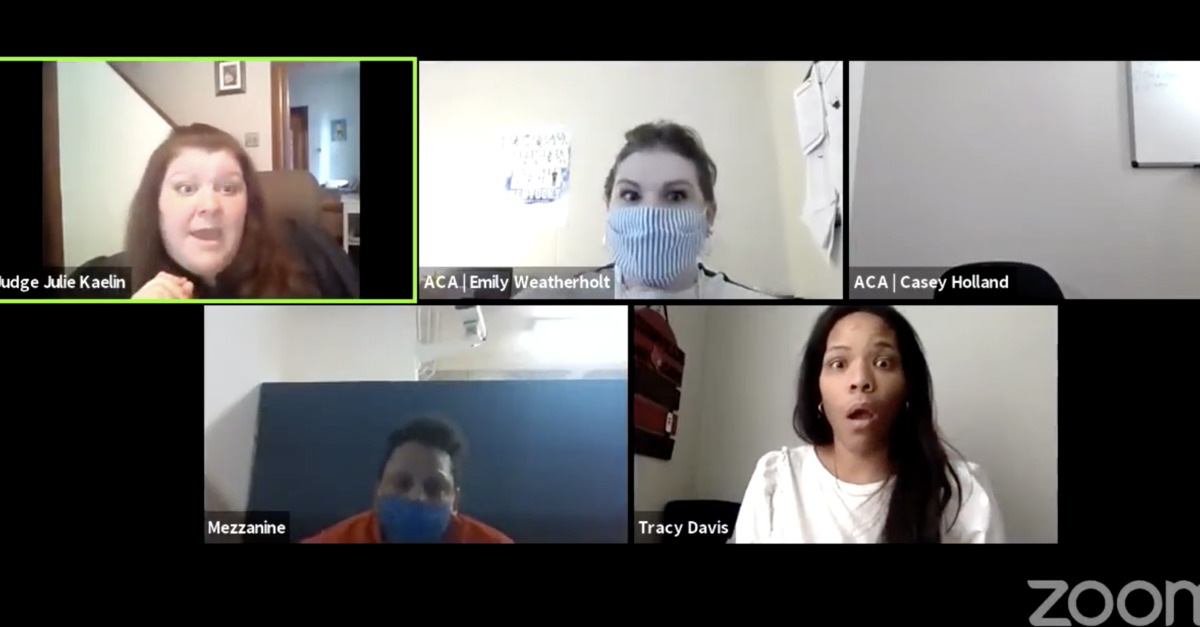 A Louisville lawyer was cited for contempt of court when she stormed out of a Zoom plea-hearing last week. Shameka O’Neil appeared by phone, interrupted the judge, threw her client under the nearest buses, and then stormed out of the hearing.

Video of the exchange provides some pretty shocking courtroom moments. Note that O’Neil is not pictured via video, but can be heard speaking:

Judge Julie Kaelin expected the defendant, Curtis Burns, to plead guilty to misdemeanor charges, but Burns refused to do so. O’Neil told the judge that her client suffered from mental illness and said she wished to withdraw as counsel. Clearly frustrated with Burns’s refusal to take a plea deal, O’Neil recounted to the judge, “Ma’am, I’ve been to the jail five times. He’s flooding the toilets. He’s causing disturbances. He’s fighting. He’s been beat up, he’s…”

Judge Kaelin warned, “You are now disparaging your client to this court!”

O’Neil continued, “Okay, well the bottom line is, my advice to him is to take the deal. If he’s not going to do that then I’m withdrawing from this case.”

Criminal lawyers, however, are not permitted to simply withdraw mid-case and leave their clients unrepresented; rather, a motion to withdraw must be granted by the presiding judge. Judge Kaelin refused O’Neil’s request for a second time.

Instead of accepting the judge’s ruling, though, O’Neil snapped, “I bet I don’t appear again. Goodbye!” and promptly logged off.

The exchange prompted shocked expressions from the judge and other participants in the call.

Judge Kaelin responded to O’Neil’s outburst by making an immediate motion for contempt, a charge that can carry a $500 fine and up to a 90-day jail sentence. Later the same day, O’Neil reportedly attended another videoconference with Judge Kaelin in which O’Neil asked for clarification about the contempt order. In that conference, O’Neil still did not appear particularly contrite. She said to the judge:

Mark my words: If you take adverse action against me, you better be sure about it, because you made some mistakes here today. I will attempt to hold you civilly or however responsible that I can, and that’s my word.

A bit of an update: Before she was a criminal defense lawyer, she was a Jefferson Cty, KY prosecutor. She had some issues then as well.https://t.co/RCrXALWgu6 https://t.co/6yB3GHD2ih

O’Neil did not immediately respond to a request for comment.