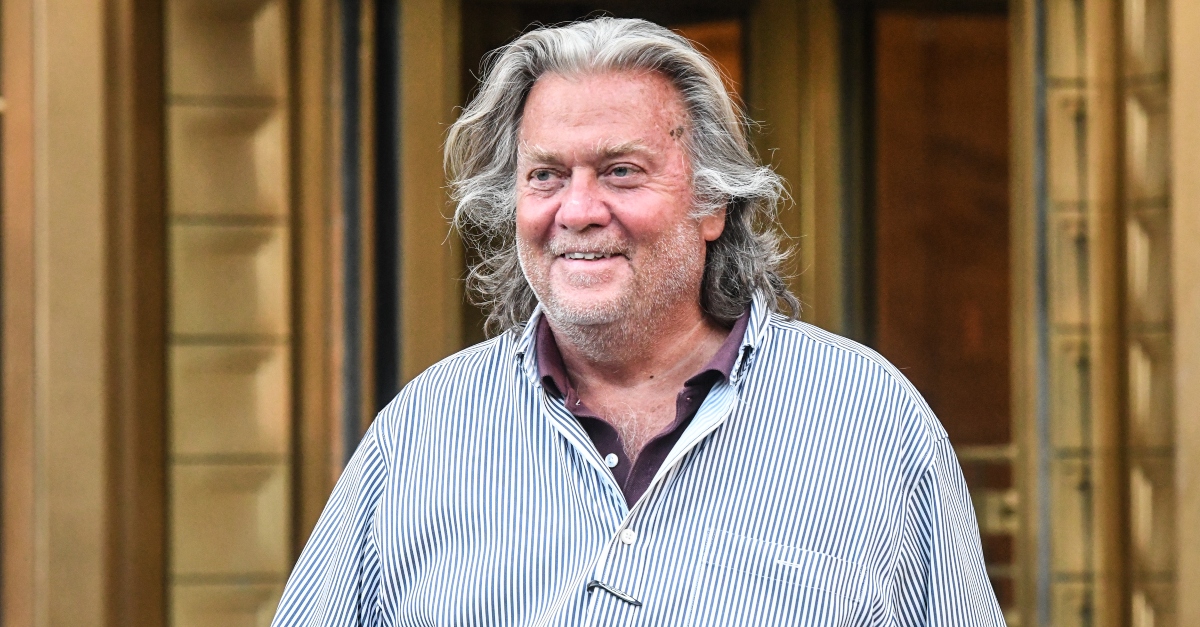 Unlike others on Trump’s lengthy overnight pardon list, Bannon’s name stands alone without support from others in positions of powers. Generally, pardons are explicitly endorsed by other elected officials and sometimes even prison officials who can vouch for an inmate’s post-conviction behavior as worthy of clemency. Bannon received no such endorsement but was instead praised by Trump for his “political acumen.” The White House also did not specify that Bannon was charged in connection with the “We Build the Wall” campaign, only calling that a “political project”:

Stephen K. Bannon – President Trump granted a full pardon to Stephen Bannon. Prosecutors pursued Mr. Bannon with charges related to fraud stemming from his involvement in a political project. Mr. Bannon has been an important leader in the conservative movement and is known for his political acumen.

The pardon was not well received by the bulk of the legal community. CNN legal analyst Elie Honig said there was “no legal prohibition on issuing pardons to friends and people who might be in a position to incriminate you unless there’s some exchange there, which could be bribery.” But Honig also called Bannon’s pardon both “self dealing” and a “favor to a crony.”

I managed to explain this without swearing.
https://t.co/sY8jno0zbs

Honig said Bannon was “essentially ripping off donors” to We Build the Wall. He suggested Bannon may be in a position to incriminate Trump and wondered openly why other co-defendants charged along with Bannon were not pardoned along with Bannon.

But Honig said Bannon’s case was straightforward and easily transferrable to the state courts — where Trump could not and cannot save Bannon from legal jeopardy.

“That’s a theft. Theft is a federal crime. It’s a crime in every state, including New York State,” Honig said. “So, if state prosecutors want to pick that case up, and they should. they can just walk right over to the SDNY, it’s a block a way, and ask for that file.  They should do that, because it’s completely unjust that Steve Bannon gets a walk.”

Florida officials revealed to me in December that their ⁦@WeBuildtheWall⁩ criminal investigation into Steve Bannon is still open, and last night affirmed post-pardon they may choose to file charges where SDNY’s fraud prosecution left off. https://t.co/ICYEzkqfil

Former DOJ attorney Michael Zeldin offered a slightly different (and not entirely accurate) take about Bannon’s future, but still acknowledged the obvious legal reality that a president cannot issue a pardon for a state offense.

Bannon by accepting the pardon is admitting guilt according to the Supreme Court. What Bannon did likely violated state financial crime laws so he may still face criminal charges in multiple states as well as civil lawsuits for his fraud. Stay tuned, he’s not out of the woods yet

Ironically, Trump's raising of over $200 million from his supporters on false pretenses to supposedly contest an election that was incontestable was exactly the sort of fraud he pardoned Bannon for.

One major takeaway from last night's pardons is that Trump doesn't seem to think corruption is that big of a deal. https://t.co/C7lOFFnbzC

Federal prosecutors alleged that the defendants used proceeds from “We Build the Wall” to enrich themselves and to live lavish lifestyles.

At the time charges were filed, Acting U.S. Attorney Audrey Strauss of the Southern District of New York said “the defendants defrauded hundreds of thousands of donors, capitalizing on their interest in funding a border wall to raise millions of dollars, under the false pretense that all of that money would be spent on construction.  While repeatedly assuring donors that Brian Kolfage, the founder and public face of We Build the Wall, would not be paid a cent, the defendants secretly schemed to pass hundreds of thousands of dollars to Kolfage, which he used to fund his lavish lifestyle.”

Bannon was arrested on a luxury yacht. Later, he got himself into hot water with his own lawyers by publicly fantasizing about putting the heads of Dr. Anthony Fauci and FBI Director Christopher Wray on “pikes” in the White House.

“Corrupt pardon power ends at the New York border,” Kaminsky said. “Thanks to legislation I authored and passed into law in 2019 that closed the ‘double jeopardy loophole,’ New York prosecutors can still pursue charges against Steve Bannon. Our law was specifically designed to address and prevent corrupt, politically-motivated pardons — just like this — to ensure that no one is above the law.”