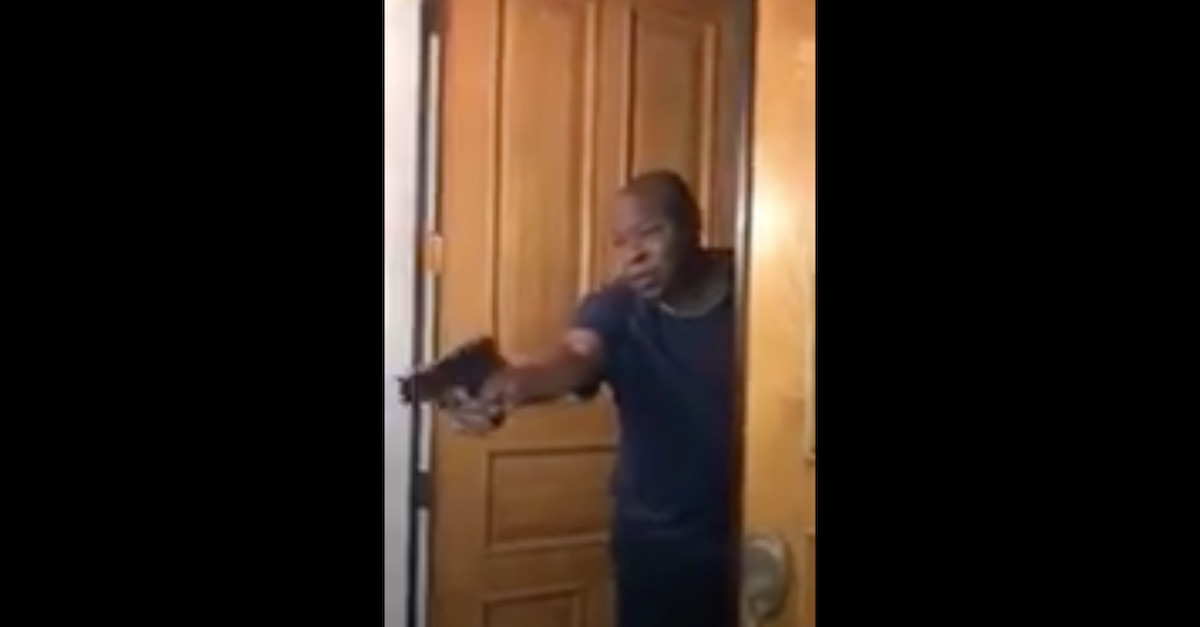 Black Lives Matter activists who showed up at Los Angeles County District Attorney Jackie Lacey’s home early Monday morning were greeted by a man with a gun. That man, they say, is Lacey’s husband David.

Melina Abdullah, professor of Pan-African Studies at California State University, Los Angeles, shared video of the incident. She said that Lacey’s husband cocked a pistol, pointed the gun at her chest, and said “I’ll shoot you. I don’t care who you are.”

I’m front of DA Jackie Lacey’s house for that community meeting she promised with the @BLMLA crew. Rang her bell to invite her.

Her husband pulled a gun, cocked it, pointed it at my chest and said “I’ll shoot you. I don’t care who you are.” @WP4BL @RealJusticePAC @shaunking pic.twitter.com/WtazUWSJIC

“I’m front of DA Jackie Lacey’s house for that community meeting she promised with the @BLMLA crew. Rang her bell to invite her,” Abdullah tweeted. “Her husband pulled a gun, cocked it, pointed it at my chest and said “I’ll shoot you. I don’t care who you are.'”

This is Jackie Lacey’s husband. He pulled a gun out on peaceful protesters. We need everyone to see this. This is the kind of Los Angeles we live in. https://t.co/dbpTIYd1a7

The video shows the homeowner say “Get off of my porch” repeatedly. He did say “I’ll shoot you.”

“I don’t care who you are, get off of my porch. Right now. We’re calling the police right now,” he said, and then slammed the door shut.

The activists said that there were there for the community meeting that they were promised but never got.

#BREAKING This morning Los Angeles District Attorney Jackie Lacey’s husband pulled a gun out on Black Lives Matter activists who protested his wife in front of their house. @BLMLA pic.twitter.com/wnCFMMvaWV

Lacey, whose office recently made waves by filing a criminal case against convicted rapist Harvey Weinstein, is up for re-election. The Democratic primary is on Tuesday.

Jackie Lacey, the Los Angeles County D.A., is up for re-election on Tuesday. That’s Lacey’s husband, David, pointing the gun. There had been plenty of reasons for Angelenos with any sense to oppose Lacey keeping her job. This may provoke those who hadn’t voted yet to act. https://t.co/x6v8Hs7Vzb

Recent articles about Lacey’s re-election prospects have criticized her office’s handling of the Ed Buck case and criticized Lacey in particular for lack of community outreach:

While [challengers] Gascon and Rossi have held a number of public events and shared debate stages in South L.A. and other areas in the run-up to Tuesday’s primary, Lacey has largely vanished from public view outside the occasional news conference at her office. After protesters disrupted portions of a late January debate, she refused to attend future candidate forums.

Dermot Givens, a Los Angeles-based political consultant and attorney, noted that Lacey’s lack of outreach could be problematic, especially with Gascon and Rossi blitzing neighborhoods that might once have solidly supported her. Some political consultants have compared Lacey’s campaign to that of former L.A. County Sheriff Jim McDonnell, who was upset by Alex Villanueva in 2018 after the incumbent failed to put away his opponents during the primary.

Law&Crime reached out to the Los Angeles County District Attorney’s Office for comment.

“As with any incident, LAPD will first investigate and if appropriate bring to an independent prosecutor’s office for review. The California Attorney General’s Office will assist LAPD in this matter,” the office said in a statement.