North Carolina Pastor Threatened to Sue Airline for Defamation After He Was Arrested for Peeing on Sleeping Woman, Police Say 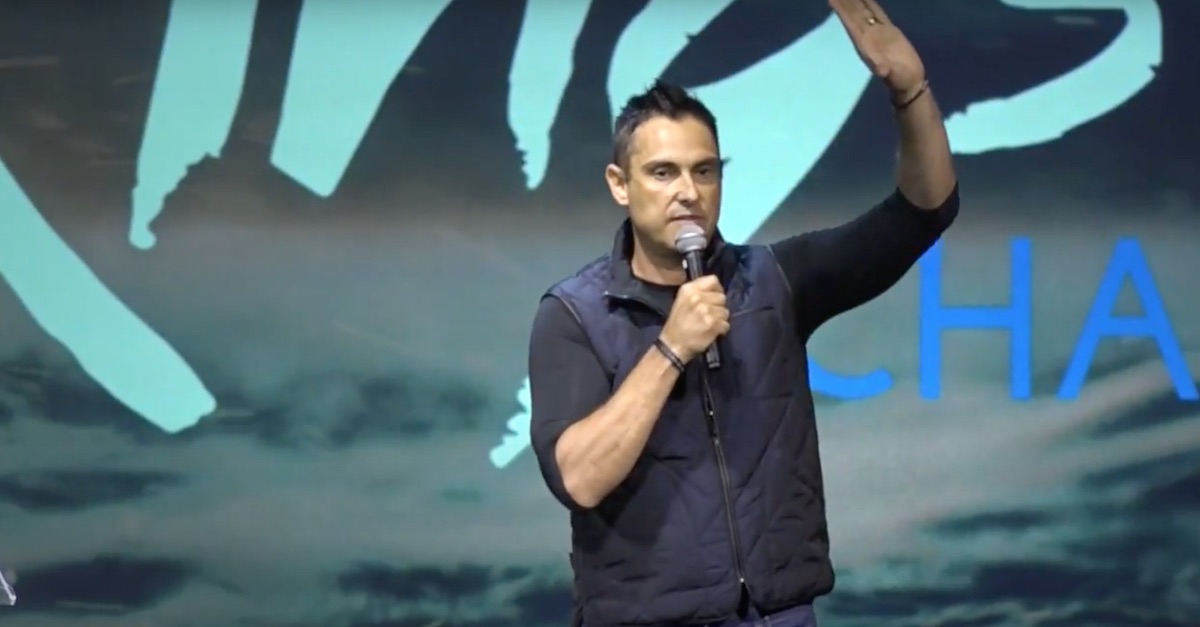 A well-known North Carolina pastor who allegedly urinated on a plane passenger as she slept two weeks ago has been identified as Daniel Chalmers of Love Wins Ministries.

The Oct. 13 incident on a red-eye flight from Las Vegas to Detroit made national headlines. During an interview with Fox 2 Detroit, Alicia Beverly said that she was fast asleep at the time she felt something wet and warm. She said that she woke up and a man, since identified as Chalmers, had his “private area out” and was peeing on her.

Beverly said that she was in the back seat next to her sister at the time the pastor was “shaking his penis” like he had just finished peeing.

“I jump up and I seen his private area out and I screamed and that woke everybody up. By that time I actually looked at him and I see him shake himself off and I’m like this man just peed on me! I looked and there was a puddle of pee in the seats!” Beverly told Fox 2.

The incident was initially blamed on a bad reaction to an unspecified “sleep aid.”

The Wayne Metro Airport PD’s case report filled in some of the gaps on what led Officers Steven Riley and Abraham Ouza to arrest Chalmers and what authorities, including the FBI did, with the information they learned.

An off-duty police officer who was on the flight, identified as Cpl. Monte, gave the most extensive account, so we will start there.

Monte said that the flight was “quiet and uneventful” until roughly 2:44 a.m, when he saw Chalmers get out of his seat and “walk towards the tail of the aircraft.”

“CHALMERS appeared to be awake but yet walking as if he had just woke up or was dealing with the pitch of the aircraft as he side stepped momentarily. As CHALMERS walked by, I observed he was only wearing socks on his feet,” Monte said. I dismissed his actions as being normal for a flight and went back to watching a movie.”

What happened next was decidedly not normal.

“Within approximately 30 seconds of his passing by my row of seats, a women from behind me let out a blood curdling scream that woke and startled the entire flight,” Monte said. “Passengers began sitting up, cabin lights came on and when I turned to see what had happened, I observed CHALMERS standing next to the victim, BEVERLY, who was seated in 23C.”

The police officer said he sprang into action.

“I then asked CHALMERS ‘What did you do?’ and he replied ‘I peed on her, I thought I was going to the bathroom,'” the officer said.

Monte said that after Chalmers was allowed to actually use the airplane bathroom, he “immediately stated ‘I didn’t do it'”—it being  “Whatever it is she,” being Beverly, “is accusing me of, I didn’t do it.” Chalmers then noted the he is a pastor

“I’m a pastor, that is out of my character and I didn’t do it,” Chalmers said, according to this account. The officer responded that both Beverly her seat were soaked in urine and that Chalmers was the only possible culprit, based on witness accounts.

The pastor allegedly replied by asking the officer to “feel” him, in order to check whether his shorts were actually wet. Monte said he observed that there was a visible wet spot “in the groin area of his shorts.”

Chalmers allegedly denied drinking alcohol, but the cop said Chalmers smelled like alcohol and had bloodshot eyes. Chalmers did say he had taken medication, namely the aforementioned sleep aid.

“I then asked if he was on or had taken [redacted] and he stated he had,” Monte said. We’ll come back to this in a moment, because there was a slight clue about what this sleep aid was.

Monte said that Beverly wanted to pursue charges and Chalmers was taken into custody. The officer said Chalmers threatened to sue Delta Airlines “for defamation of character” on his way off the plane.

Officer Ouza said that Chalmers later admitted that he had a couple of drinks and said he took “an [redacted] before he left from Vegas.”

Chalmers himself issued an apology on Tuesday confirming that this sleep aid was, in fact, Ambien.

“I want to sincerely apologize for my actions on this overnight flight. I took an Ambien for the first time to sleep well on my flight and had a terrible reaction,” he said. “I am so sorry for how this effected (sic) everyone on this flight and especially one lady passenger in particular. I have reached out and apologized to her as well. I want to please ask everyone for their forgiveness in this. I never intended or wanted for this to happen.”

Mixing Ambien and alcohol can cause dangerous side effects, including: confusion, dizziness, impaired cognition, impaired judgment, sleepwalking, and loss of physical coordination.

Police said that Chalmers submitted to a preliminary breath test (PBT) that registered at .175.

The location of the offense—a plane in flight—placed this case in federal jurisdiction.

“Because the incident occurred on board an aircraft, the FBI was the responsible law enforcement organization,” FBI Special Agent Mara R. Schneider, a Public Affairs Officer for the FBI’s Detroit field office, told Law&Crime. “The subject was issued a ticket for simple assault.”

It’s unclear at this time when Chalmers is expected appear in court.