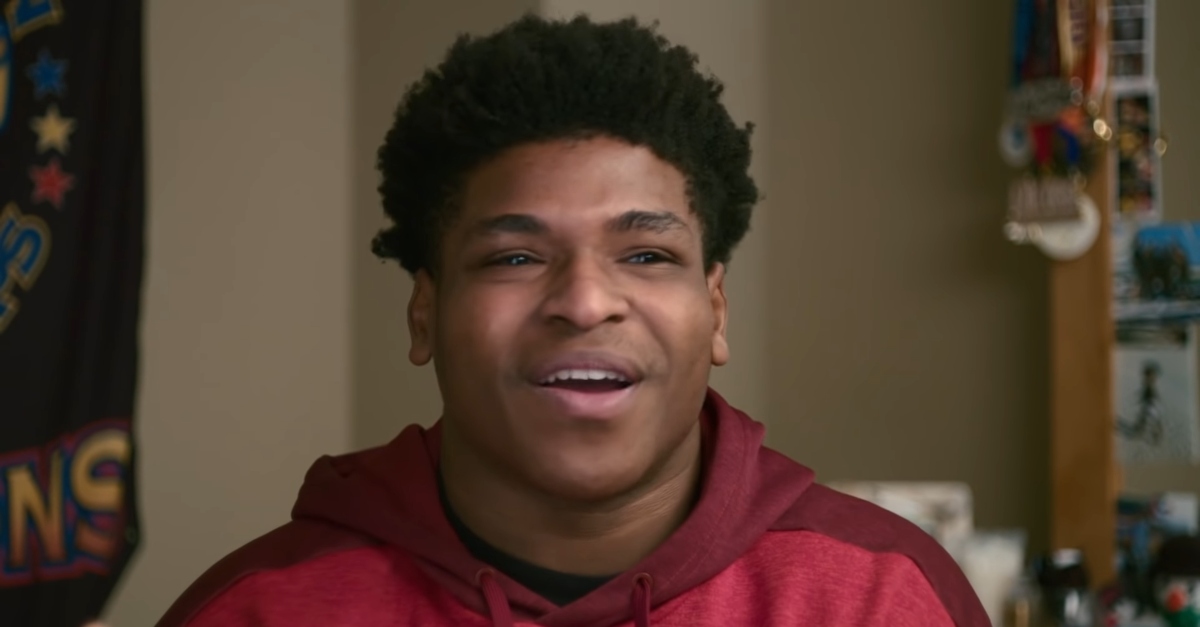 The federal criminal case against Jeremiah “Jerry” Harris, 21, took its next step on Thursday. The defendant was indicted for seven charges in his ongoing sexual exploitation case.

Harris, who was featured in the Netflix docuseries “Cheer,” was first charged on September 17 after he allegedly sought sexual images from minors, and pursued sexual activities with them. According to the criminal complaint obtained by Law&Crime, his pattern was to pursue victims on social media, and exchange the illicit imagery.

Allegedly, there was no doubt the defendant knew he was texting a kid from their first encounter.

According to authorities, Harris asked Minor 1 his age, and the boy wrote back “13 lmao.” The defendant allegedly asked for pictures. Minor 1 asked what kind, in this story.

“Face [pictures],” Harris allegedly wrote, following up with, “And booty.”

According to authorities, Minor 1 said that the defendant followed him into a bathroom during a cheerleading competition, and solicited oral sex, which the boy refused to do.

Harris allegedly maintained contact with Minor 1 from December 2018 to about March 2020. In the account, the defendant expressed regret for what happened. From the complaint:

In another two screenshots provided by [Minor A’s mother] to law enforcement, the images appear to document a text communication between Minor 1 and HARRIS. The exchange is dated February 7, and Minor 1 stated the exchange occurred this
year. In the exchange, Minor 1 asked HARRIS why HARRIS blocked Minor 1 on Snapchat. HARRIS told Minor 1, “I don’t think we should be friends on Snap.” When Minor 1 asked why, HARRIS responded, “I’m sorry for what I’ve done in the past. I
don’t think it’s a good idea we be friends on Snap.” Minor 1 explained that he interpreted HARRIS saying “I’m sorry for what I’ve done in the past” to mean he was sorry for the things he had asked Minor 1 for in the past.

Such behavior allegedly continued even after this expression of regret, however. In the complaint, Minor 4 said he met Harris at a party in the Summer of 2020, and the defendant asked him for his age. It was 17. Harris allegedly contacted him on Snapchat for illicit pictures.

Minor 4 described HARRIS as relentless and asking for naked photos of Minor 4 for three straight hours.

According to officials, the 17-year-old boy said Harris offered him money, and the minor eventually “agreed” to this exchange. Officials said that Minor 5, also age 17, also agreed to send pictures of himself to Harris.

The interactions between Minor 4 and Harris continued throughout Summer of 2020, during which the defendant paid between $2,000 and $3,000, authorities said. The defendant allegedly last spoke to the boy on August 22, paying him $500 to end things and block the defendant on Snapchat.

In the complaint, Harris allegedly confessed to illicit behavior in a voluntary September 14 interview: such seeking and getting naked photographs. There was even more, according to the official account. The defendant allegedly confessed to seeking and getting child pornography from 10 to 15 other people, who he knew were minors. He also allegedly admitted to an illegal sexual encounter with a 15-year-old at a 2019 cheer event.

Charges in the indictment include sexual exploitation of children, and transport of a minor with intent for illicit sexual conduct. Attorneys for Harris did not immediately respond to a Law&Crime request for comment. Records do not show him having entered a plea in the ongoing case. He is being held without bond.

[Screengrab via Netflix UK and Ireland]