‘I’m Trying To School You People’: Woman Arrested Twice in One Week For Refusing to Wear Mask Inside Texas Businesses (WATCH) 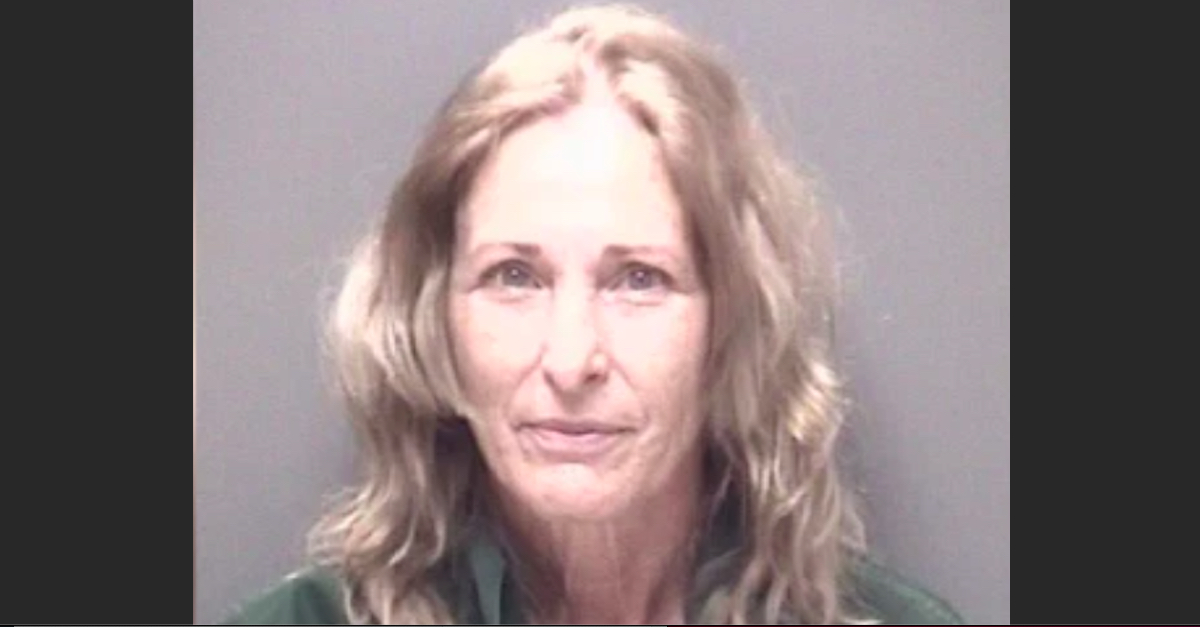 Terry Wright, 65, of Grants Pass, Ore., was arrested in Texas City on Wednesday after she repeatedly rejected requests from employees to wear a mask inside an Office Depot store. Six days prior to her arrest at the store, Wright was arrested for pulling a similar anti-mask stunt inside a Galveston bank.

Office Depot employees called local police after the maskless Wright allegedly refused to leave the store or put on a mask as required by store policy.

Texas City Police body cam footage of the incident released Friday and posted online by KRIV-TV shows the first responding officer enter the Office Depot while Wright loudly reads an irrelevant federal non-discrimination civil rights statute that does not apply to mask mandates. The officer interrupts her to tell her she has to leave or be arrested and jailed for trespassing.

“You can’t,” Wright says, showing the officer her phone. “You wanna read this. These are my federal rights.”

“No, I’m not going,” Wright responds.  “You’re in violation of the law,” she tells the officer.

The officer then grabs Wright.  Wright refuses to put her hands behind her back.

A clearly misinformed Wright continues to tell the female officer that she is “in such trouble” for arresting her under the mistaken belief that anti-discrimination laws — which prevent private enterprises that discriminating against patrons based on their race, color, religion, sex, or national origin — somehow afford protections to people who refuse to wear masks. (They do not.)

“I hope everyone’s filming this because this is a major violation!” Wright yells out.  “You guys are in such trouble; oh my gosh!”

“You are taking my rights away!” she continues to exclaim as an officer struggles to handcuff her and get her out of the big box retailer.

Officers then recognized Wright for causing a previous commotion at a Galveston a bank.

Wright said there wasn’t enough room in the back of a waiting police SUV for her to fit inside.

“I’m asking you nicely to put your leg in; if not, I’m going to drag you in,” an officer told her.

Wright was even more obstinate during the previous week’s episode inside a Galveston Bank of America.  That incident ended with an officer tackling her to the ground.

Police body camera footage from inside the bank shows Wright arguing with police officers and wrongly claiming that she cannot be forced to wear a mask inside of private businesses in Texas.

“What are you gonna do, arrest me?” an incredulous Wright asks the responding officer — who replies in the affirmative.

“That’s hilarious,” she responds — and then erroneously asserts that the privately owned bank is a public place where mask rules cannot be enforced.

“The law says that I do not have to wear a mask,” she claims.

“I would say you’ve got some issues — that you’re taking away people’s human rights,” she tells the responding officer — who then grabs the handcuffs off of his belt.

As the officer reaches out to grab her arm, Wright jerks away from him, yells “come, on dude,” and quickly retreats.

“Oh, don’t do that,” the officer says, grabbing her wrist.

Wright continues to resist the officer, screaming at him to get off of her and trying to push him away.

“Back up!  Back up!  Some old lady is getting handcuffed here!” she yells to others attempting to mind their own business nearby.

The officer takes Wright to the ground in an attempt to handcuff her while noting several times that she’s resisting arrest.

“Is anybody gonna, like, get real here?” Wright asks in an attempt to secure assistance or moral support from other customers and bank staff.

She quickly realized she was all alone in her beliefs.

Wright then claims the officer broke her foot.  Outside, the officer calls for paramedics to check her out.

Wright was charged with resisting arrest and criminal trespass over the Bank of America incident, the Medford, Ore. Mail Tribune reported.  She posted a $2,500 bond and has been released from custody.

As Law&Crime previously reported, Texas Gov. Greg Abbott (R) announced plans on March 2 to rescind both his state’s mask mandate and its business occupancy caps.  However, he said individual businesses would still be allowed to require masks and to limit capacity on their own — without the government dictating the rules.

“Today’s announcement does not abandon the safe practices that Texans have mastered over the past year,” Abbott said during the announcement. “Instead, it’s a reminder that each person has their own role to play in their own personal safety as well as in the safety of others. It’s a reminder that individual safety is managed every day as matter of personal responsibility rather than by government mandate. Individual responsibility is a corollary to individual freedom. We can have both.”