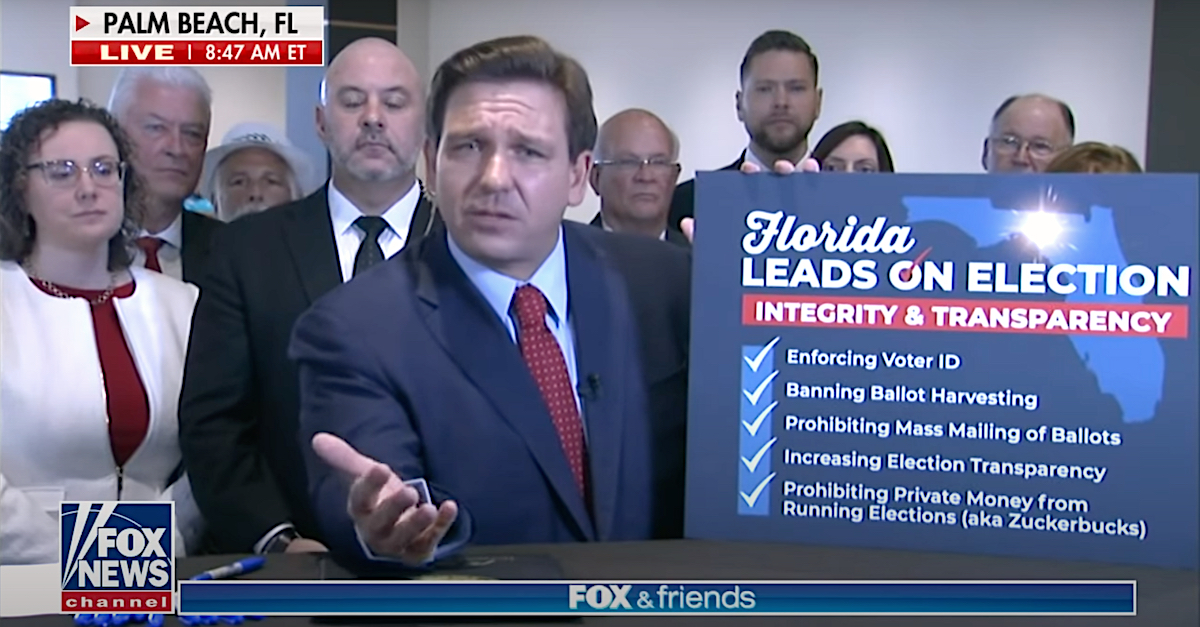 Florida’s new suite of election laws unconstitutionally discriminates against Black people, Latinx people, other minorities and old people–all in an effort to deny them access to the ballot box, a lawsuit filed in federal court on Monday alleges.

“The new law creates major obstacles to vote-by-mail, curtails access to drop boxes, and criminalizes line warming activities such as providing water to voters,” a coalition of organizations who banded together to sue behind the lead plaintiffs said in a press release.

Filed by Florida Rising Together, an economic and racial justice organization, against Florida Secretary of State Laurel Lee (R) and 67 county election supervisors across the Sunshine State, the 91-page filing seeks a judge’s injunction to bar implementation of SB 90, the controversial piece of legislation signed in front of Fox News cameras by Gov. Ron DeSantis (R) earlier this month.

The lawsuit notes that Florida lawmakers admittedly passed the new voting restrictions in the aftermath of a clean election and without identifying any “specific issues or flaws that SB 90 aimed to fix.”

To the contrary, legislators and state officials universally acknowledged that Florida’s 2020 election ran remarkably smoothly. Indeed, Florida Governor DeSantis (who signed SB 90) touted the 2020 Florida election as “the smoothest, most successful election of any state in the country.” The Florida Supervisors of Elections, in assessing the 2020 General Election, stated that “In 2020, Florida was universally praised for our exemplary conduct of elections – from the very highest offices at the federal and state level to our most important stakeholders, voters.”

The bill’s lead sponsor, Senator Dennis Baxley, confirmed the absence of any legitimate state interest justifying SB 90’s restrictions on voting. When pressed for a justification for measures making voting more difficult, Senator Baxley stated: “Some people ask why and I say why not? Let’s try it.”

“Given the absence of any plausible justification for SB 90, Florida’s long history of imposing racially discriminatory voting restrictions, and the fact that many of SB 90’s provisions target voting practices successfully employed during the 2020 election by Black, Latino, and disabled voters or organizations such as [organizations like the plaintiffs] that mobilize or assist such voters, SB 90 was intended to and will place a discriminatory burden on voters of color, especially Black and Latino voters,” the lawsuit continues.

Specifically, and spread across seven separate claims for relief, the lawsuit alleges that SB 90 violates the Voting Rights Act of 1965, the First Amendment, the 14th Amendment and the 15th Amendment. According to the filing, Florida’s recently enacted voting restrictions run afoul of the VRA’s protections against intentional racial discrimination and discriminatory results as well as the First Amendment’s protections against compelled speech and undue burdens on political speech.

The so-called “line warming restriction” in SB 90–which bars people from passing out food or water to voters who are waiting in line outside of their polling stations–is repeatedly called out for being unconstitutional.

The plaintiffs allege that this restriction violates a section of the VRA which protects people’s ability “to seek assistance in voting from a person of their choosing.” Additionally, the lawsuit says the above restriction is both unconstitutionally vague and overbroad in violation of the First Amendment.

“Plaintiffs’ line-warming activities involve speech and expressive conduct that is protected by the First Amendment,” the filing notes. “Nonetheless, that speech and conduct appear to be banned by SB 90’s Line Warming Restriction.”

The coalition of plaintiffs challenging the law also note that they each provide some iteration of food, water and respite for voters plagued by under-resourced polling stations in minority communities where long lines are the norm.

“There is no definition of what ‘influencing a voter’ means, and nothing in the law restricts it to attempting to influence how a voter votes,” the lawsuit notes. “Thus, this provision would have the effect of barring activities, such as the programs implemented by Plaintiffs Hispanic Federation, Faith in Florida, and Equal Ground in the 2020 elections (and which they intend to offer in future elections), to provide food, water or other support to voters to encourage them to remain in line and exercise their right to vote. It would similarly bar the language assistance that Hispanic Federation has offered in past elections and intends to offer again.”

Such efforts, the lawsuit adds, were “particularly important in mobilizing the Black vote in the 2020 General Elections.”

The implication is clear enough but the lawsuit also explicitly alleges “intentional racial discrimination” viz. SB 90. Jorge Vasquez, the power and democracy director for the Advancement Project National Office, told the Tallahassee Democrat that their effort is the only lawsuit that makes such a claim.

“In a country where we celebrate democracy, voting should be made accessible for everyone; but instead of making voting easier, SB 90 adds unnecessary hurdles to the process,” Deputy Director of Hispanic Federation Florida Laudi Campo added. “It reduces access to the polls in various ways, makes it harder for people to vote, and confuses voters by changing common-sense rules that have increased voter participation. Voting rights have never been given to people of color; we had to fight for them. We are not asking for special treatment; we ask to keep in place measures that have proven to increase voter participation in our community.”

“SB 90 is a demonic law that intentionally suppresses the votes of Black and Brown people,” added Executive Director of Faith in Florida Pastor Rhonda Thomas. “Considering that people of color have fought for decades for the right to vote—and to ensure their votes are counted—it is offensive that state lawmakers would attempt to take us back to Jim Crow to maintain their own power. Who would do something so evil?”

Law&Crime reached out to the Secretary of State’s office for comment on the lawsuit.