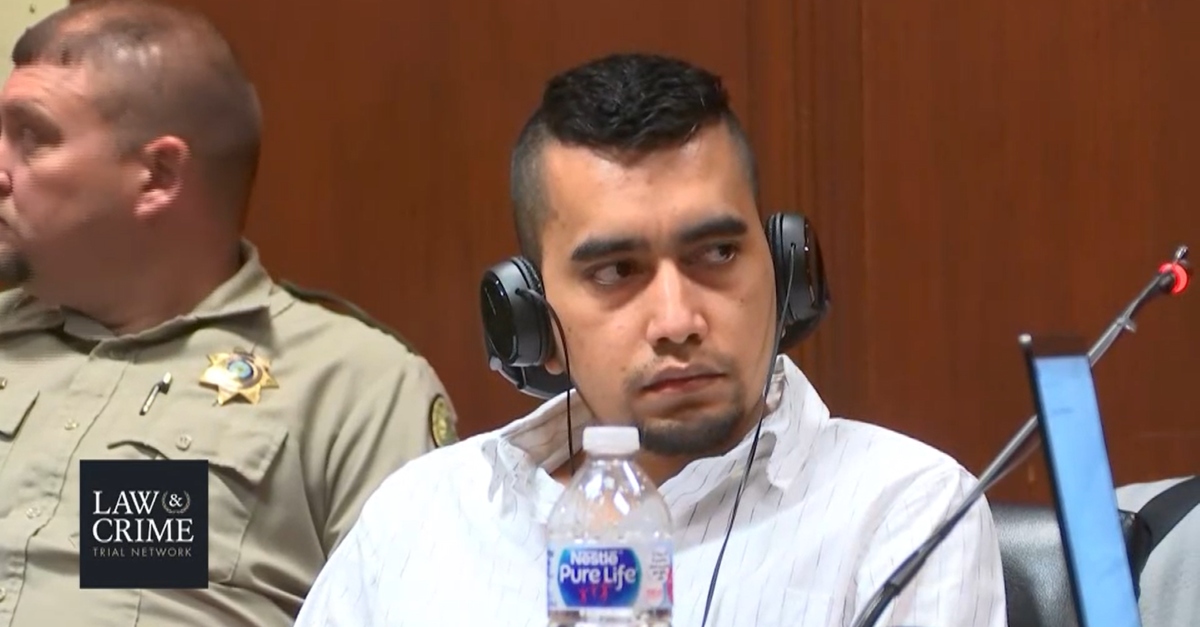 It remains to be seen how — or whether — the defense will try to put these details together.  The defense tactically chose to postpone its opening statement until after the state’s case in chief.

Tibbetts, who was home for the summer in the town of Brooklyn, Iowa, went missing July 18, 2018 while out on a jog, prosecutor Bart Klaver said in opening statements on Wednesday. The avid runner went missing and no-showed for work the next day. Her family became worried. A search began. Investigators found surveillance footage linking a silhouette of a jogger with a black Chevy Malibu, according to the state. They identified the vehicle, and an investigator happened upon it while driving home one day. The driver was Bahena Rivera, the prosecutor said.

Cristhian Bahena Rivera listens with the held of translators as prosecutors give opening statement. Bart Klaver says Bahena Rivera admitted to investigators he saw Mollie Tibbetts and thought she was “hot.” @LawCrimeNetwork pic.twitter.com/DwxoF4JsSE

Ultimately, authorities say Bahena Rivera admitted seeing the missing woman, following her, and catching up with her. According to their account, Tibbetts told Bahena Rivera that she did not want anything to do with him. He allegedly admitted getting mad, but the next things he said he remembered were noticing Tibbetts’ ear buds and recalling that she was in the trunk of his vehicle. He allegedly said he put her on his shoulder and placed her in a field.  Rivera led law enforcement officers to the location of Tibbetts’ body. Other searches had failed to locate her.

An autopsy revealed that Tibbetts had been stabbed seven times.

This cause of death brings us to the defense’s approach to the case. Dalton Jack’s brother, Blake Jack, took the stand first. He testified to being out of town in the city of Newton at a job site for his construction company. During cross-examination, defense lawyer Jennifer Frese got him to acknowledge that both siblings are avid hunters who would field dress animals using a knife.

She suggested that Tibbetts and Dalton Jack had relationship problems, that Dalton cheated on Tibbetts, and that Dalton had anger problems. Blake said he was not aware of that.

#MollieTibbetts boyfriend, Dalton Jack is on the stand. Defense will likely try to point to the finger at him. @LawCrimeNetwork pic.twitter.com/H45WFEp8Sa

Dalton Jack took the stand next. He said on the morning of July 18, 2018, the day Mollie went missing, he sent her a good morning text. He later opened a Snapchat at 10:30 p.m., but did not remember when he actually received it. After refreshing his memory, he said that it was of a face with a caption. He learned about the disappearance the next day through calls from Mollie’s friends. When he began to get worried, he contacted everyone he could think of and called her cell without success. He told his boss that he had not heard from her in a while and drove his own vehicle back home, returning at dark at 9 p.m. to see a crowd on the lawn and an officer taking statements.

During cross-examination, he said he joined the Army on November 6, 2018, because of what happened.

Dalton Jack said he and Mollie met and grew up together in Brooklyn, Iowa. He planned on marrying her. Asked by defense lawyer Chad Frese if she was the love of his life, he said yes.

But the attorney pressed him on what the defense construed as inconsistencies in his statements to law enforcement regarding when he spent the night in Dubuque and what he did on the night of the 18th.

He acknowledged not telling investigators about cheating on Tibbetts, saying he did not think it was pertinent to the case.

“So what?” said Chad Frese.

Mollie knew about the infidelity and they worked through it, he said. He acknowledged that Tibbetts said three days before the disappearance that she was upset and sad about the affair.

Dalton concedes he was angry that Mollie wanted to move in with friends b/c she was going back on what he had been planning for a year and a half. @LawCrimeNetwork

Under cross-examination, Jack acknowledged having a temper at ages 16 and 17, but not anymore. Frese asserted through a question that Dalton had once choked a man out, but the state objected as to relevance. The judge sustained the objection.

Dalton Jack then acknowledged getting into fights. During re-cross, he said he did not remember telling Mollie he did not like other men looking at her.

Dalton said that he did not want to testify because he did not want to be in the same room as Bahena Rivera. During redirect, he maintained the defendant was guilty. Klaver also asked a line of questions which detailed Dalton’s cooperation with the prosecutor in preparation for the trial.

Dalton said he never had access to Bahena Rivera’s vehicle and that he and Tibbetts never had a connection with the defendant.

The defense noted at the end of Dalton’s testimony that they will likely call him back to the stand and that he is still under subpoena.