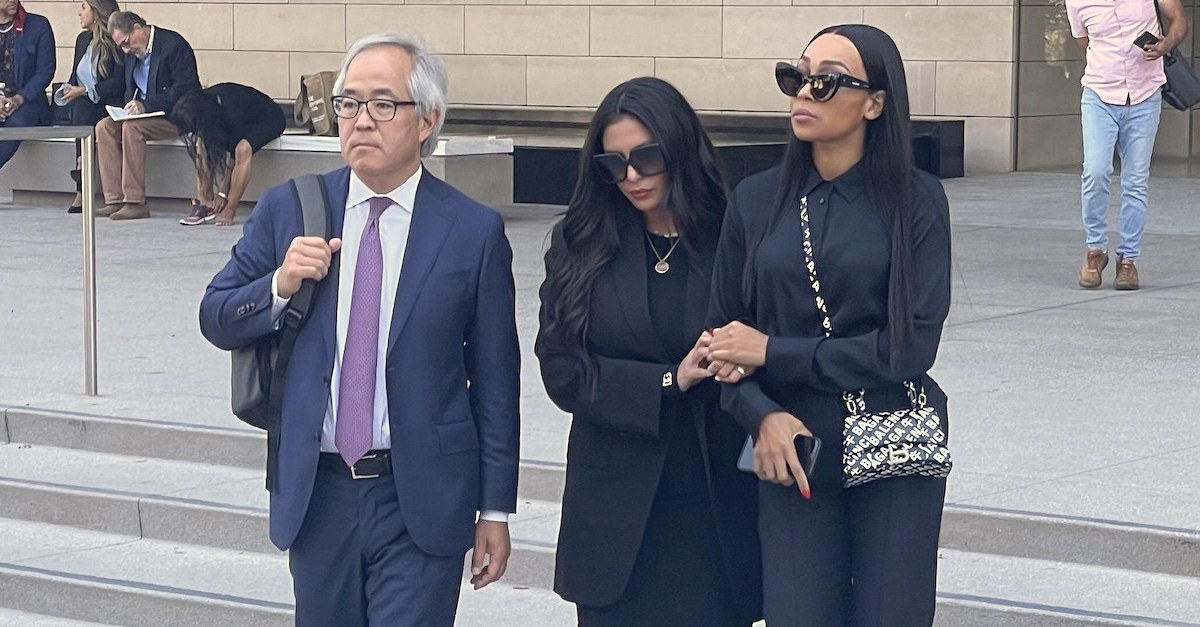 A lawyer told jurors that the egregious behavior of Los Angeles County officials and their “clumsy” coverup over photos from the helicopter crash that killed Kobe Bryant warrants a $2.5 million damages award to both Vanessa Bryant and Christopher Chester, with another $1 million for each year of future suffering.

Jerry Jackson, who represents Chester, made the recommendation during his closing argument Tuesday afternoon, saying he’s usually worried about asking jurors for too much. In this case, he said, nothing is too much given what county officials did with photos of human remains from the crash, and the lack of accountability seen in trial.

“You can’t stack it too high. You can’t spread it too wide,” Jackson said.

Jackson gave jurors a range for future suffering of $100,000 to $1 million per year, with Bryant’s life expectancy at 40 more years and Chester’s at 30. Jackson said if he were a juror, he’d go for $1 million, and he asked that any award be evenly split between the sheriff’s and fire departments. Together, that adds up to a $75 million damages request, though Jackson never stated the total figure.

“What a joke,” Jackson scoffed.

Jackson reminded jurors of what Chester said in testimony last week: Jackson received voicemail at his law office during trial from a woman who said she’d heard from someone online who claimed to have the photos available to view for a fee.

“As long as they’re alive, there will always be somebody claiming to have these photos,” Jackson said. “For the rest of their lives, this stuff will pop up.”

Jackson’s 25-minute argument followed an approximately 75-minute argument from Bryant’s lawyer Craig Lavoie, who didn’t state a damages amount but urged jurors to return a verdict in favor of Bryant and Chester that stands up for the dignity and respect that every civilization affords the dead.

He began by telling jurors that “44 years ago today, in Philadelphia, Pennsylvania, Kobe Bryant was born.”

“Today is his birthday,” Lavoie told the jury of nine. “And it’s an honor to be standing here asking for justice and accountability” for him and his daughter Gianna Bryant. Lavoie said he was also seeking justice for Chester and his wife, Sarah George Chester, and his daughter, Payton Chester, who also died in the Jan. 26, 2020, crash.

Family members of victims Christina Mauser and John Altobelli, Keri Altobelli and their daughter Alyssa Altobelli settled their lawsuits against LA County over the photos for $1.25 million each last year.

Lavoie reminded jurors of testimony they heard that morning from Dennis Breshears, the acting deputy chief of the LA County Fire Department’s professional standards bureau who said he learned while sitting at the defense table during trial that a now-retired fire captain who photographed the scene had returned his county-owned laptop without a hard drive that’s still never been located.

That captain, Brian Jordan, fled the witness stand three times during his testimony, and muttered a comment about being able to take human remains and “make gumbo or something,” that Lavoie highlighted on a television screen for jurors.

“If that’s what he says under oath in open court, what do you think he thinks of these victims’ remains while he’s alone with those photos at his home?” Lavoie said, adding later, “Imagine how Mrs. Bryant and Mr. Chester feel about their fate being in Brian Jordan’s hands.”

Lavoie used similar “imagine how Mrs. Bryant and Mr. Chester feel” lines several more times, and he repeatedly drew attention to a jury instruction about the county’s deletion of photos that says jurors can “presume the evidence was unfavorable to the plaintiff.” The instruction was approved by U.S. District Judge John F. Walter as a sanction against the county for the deletions.

Lavoie reminded jurors that Deputy Doug Johnson testified he walked Jordan to each area of human remains at his request so he could photograph them, down int a ravine where Sarah Chester’s and Gianna’s were located.

“Can you imagine walking down into a ravine to take souvenir pictures of a deceased child?” Lavoie said to the jury.

Jordan also said in previous internal interviews that he’d told now-acting Los Angeles County Fire Chief Anthony Marrone that he had a sight on Gianna’s body, though Marrone has testified he instructed his staff not to photograph any human remains and that Jordan went to the crash site on his own decision. Like Breshears, Marrone learned in court that Jordan’s hard drive has never been located, as did Los Angeles County Sheriff Alex Villanueva.

It’s up to the jury to decide what constitutes the public dissemination of the photos, and Lavoie argued they have many options, including Deputy Ben Sanchez, who was off duty and playing the Call of Duty video game when off-duty Deputy Michael Russell sent him the photos. Russell works at the Malibu-Lost Hills station that responded to the crash, but Sanchez works at the Santa Clarita station 45 miles away.

Lavoie told jurors that witness Luella Weireter was in the gallery, then credited her testimony about hearing fire Capt. Tony Imbrenda share photos of human remains at the crash site during between cocktail hour and dinner at the Radio & Television News Association of Southern California’s Golden Mike Awards on Feb. 15, 2020. Imbrenda denied in testimony last week that the conversation was inappropriate or that his girlfriend had asked to see the photos, but, Lavoie said Tuesday, “Tony Imbrenda cannot be trusted.”

Lavoie also said Imbrenda “is the most egregious offender in destroying evidence” who “orchestrated a mass deletion campaign” and wrote press releases about the investigation without disclosing to his supervisor he himself had photos of human remains from the crash. He showed a chart of how photos were distributed, and the recipients who’ve never been identified, and said, “Imagine what Mr. Chester and Mrs. Bryant feel when they see this chart?”

Some of the recipients include Russell, who said he looked at them at home while imaging what kind of report he would write if he was assigned to a similar crash, as well as sheriff’s employee Scott Miller, who didn’t testify in trial but said in an earlier interview he asked his wife if she wanted to see them while describing the contents in crass terms. Deputy Rafael Mejia also was mentioned, as he sent the photos to Cruz, who was his trainee, as well as trainee Deputy Ruby Cable, though Cable said in an internal investigation interview played in trial that she didn’t need them.

Lavoie also said he had no slide or chart covering emotional distress because “I don’t think you need a slide.”

“I don’t think you need bullet points. You saw the pain on her face,” he said of Bryant.

He reminded jurors that Bryant said she was nursing her five-month-old daughter when a friend called to tell her of a Los Angeles Times article about a deputy sharing photos of her husband’s remains at a bar. Bryant cried while testifying about handing her baby to a friend and running outside her home so her daughters couldn’t see her, then crying. She said she wanted to run down the street and scream and compared it to wanting to run down an ocean pier but being unable to leave her own body.

Lavoie also reminded jurors of Bryant’s testimony about her young children and never wanting them to see the photos and “to explain what the fire department and sheriff’s department did to their dad and their sister when they were vulnerable up on that hill.” He reminded jurors that the county lawyers never offered any expert testimony about Bryant or Chester’s emotional states, which followed the county’s decision not to call long-planned expert witness Marc Cohen, a psychiatrist and professor at UCLA.

Lavoie said if he asked jurors what percentage chance they think there is that the photos will surface, “I bet I’d get nine different answers.”
“But whatever each of us thinks that number is, it’s definitely not zero,” Lavoie said. And Bryant and Chester “don’t have the luxury of reducing it to a cold percentage.”

Jackson told the jury that Lavoie’s meticulous presentation of the facts made his job easier, then told them he was forgoing 12 pages of notes that included gory details about the crash victims but would use them in rebuttal if the county tries to argue the jury can’t conclude photos of the Sarah and Payton Chester were publicly disseminated.

“I’m not going to start this fight, but I will finish it,” he said. He described Chris Chester’s pain over the photos and the county’s handing of them and drew attention to testimony from county officials who said they understood that Bryant and Chester’s grief had been compounded by what happened.

“They broke him. They knocked him when he was down, and they did it intentionally,” Jackson said.

LA County lawyer Mira Hashmall, a partner with Miller Barondess LLP, is to give her closing argument Wednesday at 8 a.m., then Walter will instruct the jury.