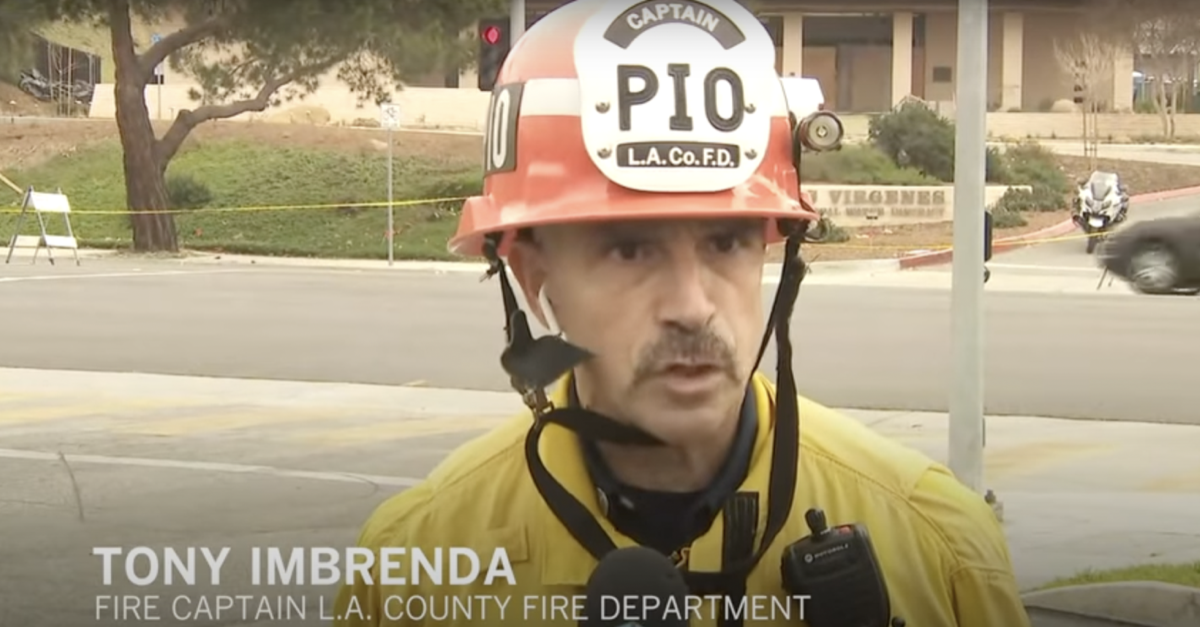 A Los Angeles County fire captain on Wednesday denied showing photos of Kobe Bryant’s body during a gala three weeks after the helicopter crash that killed the Lakers legend, his daughter Gianna Bryant and seven others, telling a federal jury he was instead “talking shop” about how to manage such a chaotic scene.

Capt. Tony Imbrenda also said his girlfriend never invited a woman whose cousin died in the crash to view the photos, saying “that never happened.”

“I am adamantly testifying to that fact. That’s not true,” Imbrenda said on the sixth day of trial in lawsuits brought against Los Angeles County by Vanessa Bryant and Christopher Chester, whose wife, Sarah Chester, and daughter, Payton Chester, died in the Jan. 26, 2020, crash.

Imbrenda said Luella Weireter maybe “was mistaken who she was talking to, but she wasn’t talking to my girlfriend.” Imbrenda said he showed photos to three others who also responded to the crash as their wives and girlfriend talked in another group.

“The firefighters were kind of talking shop with each other,” Imbrenda said.

“No, sir,” Imbrenda answered. Still, Imbrenda said he now realizes he shouldn’t have displayed any photos from the crash during the Golden Mike Awards, a gala put on by the Radio & Television News Association of Southern California.

“I felt the discussion was appropriate. The setting was not,” Imbrenda said. “I would not engage in that conversation in that setting given the chance again.”

The testimony highlighted the sixth day of trial and set up a credibility decision for jurors who are to decide whether to hold Los Angeles County and individual defendants, including Imbrenda, liable for privacy and negligence claims brought separately by Bryant and Chester that were consolidated for trial.

The jurors heard emotional testimony last week from Weireter as she recalled Imbrenda’s girlfriend inviting her to see the photos. She also testified that she heard a crass comment about seeing Kobe’s body from another fire official and talked about her decision to complain to the fire department weeks after the event. Her husband, Cody Weireter, a captain with the Los Angeles City Fire Department, watched her testimony from the gallery

But Imbrenda insisted it couldn’t have happened, telling Li, “Absolutely not, sir. No way” and denying he’d treated the photos, as Li said to both him and Weireter in questioning, as “a party trick.”

Imbrenda said his girlfriend “would not know about those photos” or any others on his phone because they don’t “talk about my job.”

He also denied that one of the fire officials he showed the photos to, LA County fire Capt. Sky Cornell, commented “I can’t believe I just looked at Kobe’s burnt up body and now I’m about to eat,” as Weireter testified last week.

“Sir, I don’t know how that could be true,” Imbrenda told Li, because he didn’t have any pictures of Kobe’s remains. He called the statement “an embellishment” from Weireter

“You believe she made it up?” Li asked.

Imbrenda avoided the confirming answers sheriff’s deputies gave this week when asked if he knows what he did hurt Bryant and Chester, instead answering, “I can’t speak to what my actions resulted in, but I would never engage in any behavior that would cause harm to my patients or their family.”

Imbrenda admitted to obtaining photos from Capt. Brian Jordan and four or five others, but he denied the photos were graphic and said Jordan “wouldn’t have sent me graphic photos.” Imbrenda said his photos were general shots of the debris field that included human remains, but the remains were not the focus of his photography. He also obtained photos from three or four others that day but said it was common for fire personnel to send him photos because he was a public information officer.

Li showed Imbrenda previous statements that contradicted those claims, including Deputy Douglas Johnson saying he pointed out human remains as Jordan photographed them up close, even though Johnson had already photographed the scene. Imbrenda told an investigator in March 2020 “there were a few graphic photos” and other previous descriptions from fire and sheriff personnel describe far more gruesome scenes than Imbrenda and others have described in testimony.

Chester’s lawyer, Jerry Jackson, questioned Imbrenda about some of those descriptions, including that one of the photos showed human intestines. Imbrenda said he couldn’t answer because “I’m not trained in post-mortem tissue identification.”

Li also questioned why Imbrenda felt he needed to photograph the scene.

“We take photographs should they become necessary,” Imbrenda had said. Li asked the fire captain if he ever ended up needing them.

“As it turns out, no,” Imbrenda answered.

Li played an audio clip jurors have heard many times already of now-acting deputy LA County fire chief Dennis Breshears, who has been seated at the defense table during the trial, saying his agency has “no business reason to take pictures of decedents.” Li returned to questions about Imbrenda’s photos, with Imbrenda telling him of “a distinction not being covered by your question.”

“Human remains were not the subject of the photos,” Imbrenda said, adding that they were only part of the photos. “So I would agree with Chief Breasher’s statement.”

Li moved into the county’s investigation, asking Imbrenda about a press release about the photos that he wrote without telling his boss he had his own photos from the crash site on his phone.

“What I had I didn’t feel was of any interest to the chief,” Imbrenda said. Imbrenda also admitted to not turning in his phone to investigators until November 2021 after refusing to do so for about 18 months.

Scott testified after Imbrenda, saying he saw only a few photos. Bryant’s lawyers said in questioning that Scott walked away from the conversation with Imbrenda and the others before it ended, but Scott testified he knows he never heard anything about “Kobe pictures,” only possible references to the “Kobe crash” or something similar. He agreed that the “crux” of the conversation was not about how to identify the helicopter but said he “wouldn’t doubt” that such a thing was discussed.

Scott said he’d asked Imbrenda about the crash because he was interested in learning how to respond to a huge “media frenzy” event. He said his first through “was how terrible it was for the families to have to go through something like this.” He then wondered “how Mr. Imbrenda dealt with the challenges of being PIO for an incident like this.”

Jackson asked Scott how looking at photos of intestines and a torso helps him “handle a media frenzy.”

“Seeing a torso did not enhance my ability to handle a media frenzy,” Scott said.

Wednesday began with Los Angeles County sheriff’s Chief Jorge Valdez taking the stand again after Jackson’s direct exam on Tuesday prompted him to offer his “utmost condolences” to Bryant and Chester. He followed up on an audio recording of him and Sheriff Alex Villanueva falsely telling Los Angeles Times reporter Alene Tchekmedyian they knew nothing of a citizen’s complaint about a deputy sharing crash photos in a bar, saying “I’ll be honest, I bungled the interview with the reporter. I got stuck on technicalities.”

Valdez said he didn’t believe the complaint submitted online from bar patron Ralph Mendez about Deputy Joey Cruz fit the technical sheriff’s department definition of a complaint, and if he could do the interview again he would tell “the reporter to clarify things” and tell her the steps the sheriff took to preserve the privacy of all involved. He was followed in testimony by David Freskos, a digital forensics expert hired by Bryant and Chester who said the sheriff’s department “did the opposite” of what’s considered standard practice for forensic examination before it concluded all deputies had deleted the photos.