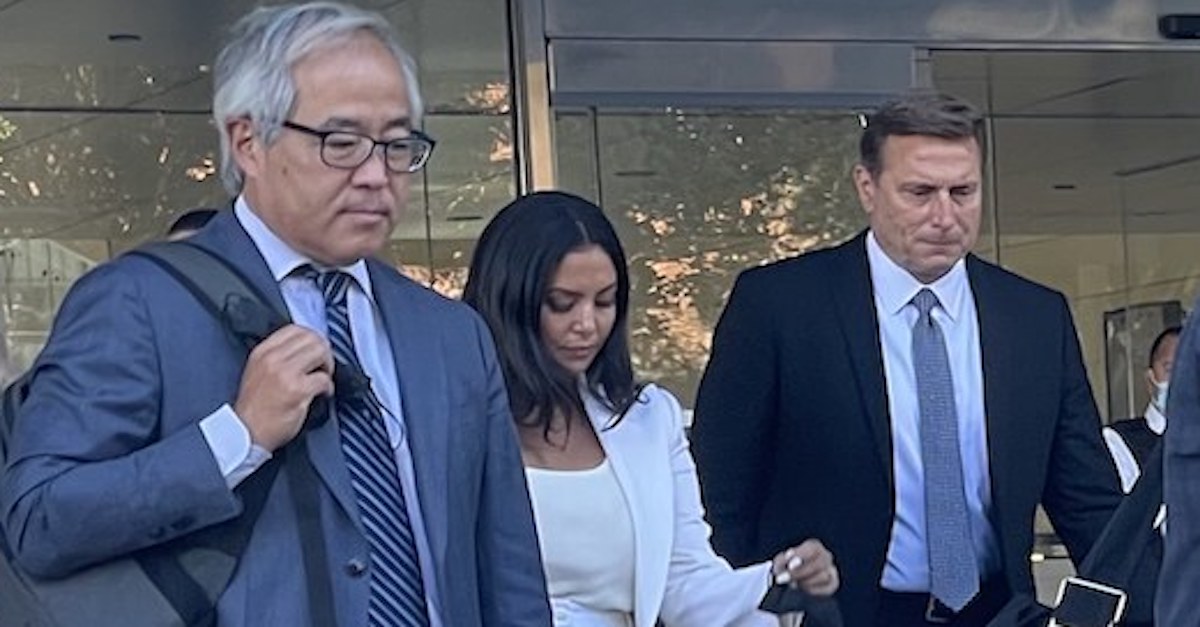 A Los Angeles County sheriff’s deputy who photographed human remains at the site of the helicopter crash that killed Kobe Bryant and his 13-year-old daughter, Gianna Bryant, testified Friday that he doesn’t regret taking the photos and believes he was complying with a supervisor’s orders.

“I know I didn’t do anything wrong,” said Deputy Douglas Johnson, answering “no sir” when a lawyer for Vanessa Bryant asked him if he’d do anything differently if he could.

Johnson also said he didn’t know that the deputy he said instructed him to take the photos denies doing so, and he testified he only took 25 photographs, though Deputy David Katz testified Thursday that he’d taken 100. Johnson said he deleted the photos when he got home from the crash scene.

His testimony supports an argument from Bryant and co-plaintiff Christopher Chester that the Sheriff’s Department is liable for privacy violations committed by its personnel because of a lack of training and policies regarding the photographing of human remains at horrific tragedies like the Jan. 26, 2020, crash in the hills near Calabasas, California.

It followed testimony from retired Los Angeles police Lt. Adam Bercovici, an expert witness who described a widespread problem of law enforcement collecting photos of gruesome death scenes in “death books” or “ghoul books” and said the sheriff’s investigation into the sharing of the crash photos was greatly inadequate. He also said there never was a legitimate investigative reason for sheriff’s or fire officials to photograph the crash site, and that once they did, the photos were evidence in a federal investigation by the National Transportation Safety Board and needed to be preserved. He testified on cross-examination from LA County’s lawyer Mira Hashmall that deputies could have been ordered to turn in their phones or face potential criminal charges, and that he would have sought advice from the U.S. Attorney’s Office because of the NTSB investigation.

Responding to fatalities, Bercovici testified,  is “an awesome responsibility that we give sometimes very young officers and deputies,” so agencies must strictly enforce clear policies. “Otherwise, it’s chaos,” he said.

“When you’re investigating this thing you gotta dig in. You gotta ask the uncomfortable questions,” Bercovici said. The “deep dives” that should have been done “were not done.”

Bercovici, who said he’s been paid $28,000 for his testimony by Bryant and Chester, also said the sheriff’s department took much too long to conduct interviews, with the complaint from Ralph Mendez received on Jan. 29, 2020, but six deputies not interviewed until 61 days later, with four more interviewed 97 days later.

That led to a debate about the COVID-19 pandemic during cross-examination and re-direct, with Hashmall asking Bercovici about it and suggesting that restrictions related to it could have prevented such interviews from happening sooner. In response, Li asked Bercovici on re-direct: “Have you ever heard of a service called Zoom?”

“Boy, have I,” Bercovici answered, eliciting laughter from the courtroom. Li also emphasized in re-direct that the pandemic didn’t close society until into March, while Mendez’s complaint was on Jan. 29.

Bercovici also testified about seeing a gruesome photo of Nicole Brown Simpson’s body being passed around by police in 1994 and informing the homicide unit about it. He said he remarked at the time that the photo wasn’t supposed to be floating around the police department. He said he also contacted the LAPD’s homicide unit as was told, “We know about it, and we’re trying to round them up.” He also went over a report from 2016 in which someone complained about hearing a deputy say at a homicide scene: “That’s why they shot him, because he’s a Green Bay Packers fan,” and photographing the body.

Bercovici said he first saw it as a 23-year-old rookie after a train struck a pedestrian and officers photographed the victim for no apparent investigate reason. He said officers kept scrapbooks and seemed to have “a fascination” with saving death photos, with an affinity for traffic crash victims with traumatic amputations and suicide victims with brain matter spilling from their heads.

Bercovici also testified about the impropriety of how the photos were distributed, including one exchange between Deputy Michael Russell and Deputy Ben Sanchez, who were playing Call of Duty, and one to a fire captain who has never been identified.

Johnson, the deputy whose testimony resumes Monday, is the one who sent the photos to the captain. He testified Friday that he cannot recall who it was but is confident it was a fire captain and not an imposter because of his hat and how he was behaving. In detailed questioning from Bryant’s lawyer Eric Tuttle then Chester’s lawyer, Jerry Jackson, Johnson acknowledged taking photos of every area of the site with human remains, including some that are consistent with the injuries suffered by the Chester and Bryant victims.

In addition to taking his own photos, Johnson also directed now-retired fire Capt. Brian Jordan to each site of human remains as Jordan photographed them. Jordan, who was in the hallway Friday awaiting his turn to testify, will be called to the stand after Johnson on Monday. Also expected to testify next week is Deputy Joey Cruz, who was assigned to keep intruders out of the site on the second day and hiked closer to take his own photos of the remains. He’s the off-duty deputy who showed them to a bartender and drew the citizen complaint from Mendez.

Bercovici took the stand Friday, the second full day of testimony in the expected 9 to 10 day trial, following testimony from Luella Weireter, a former paramedic who saw fire officials sharing the photos during cocktail hour at a Feb. 15, 2020, awards gala. Weireter’s cousin Keri Altobelli died in the crash with her husband, John Altobelli, and their 14-year-old daughter, Alyssa Altobelli, and her husband is an LA city firefighter.

She said she wasn’t excited about the gala because she knew that people would be there who had responded to the crash, which “was a very hot topic of conversation at the time.” While she was there, Weireter saw that several people were grouped together looking at photos on LA County Fire Information Officer Tony Imbrenda’s phone. She said Imbrenda’s wife invited her to check them out.

“She was like, excited, trying to get us to come and look at them,” Weireter said in a halted, tearful voice. “She said it multiple times.”

“Was it like a party trick?” asked Bryant’s lawyer Luis Li.

“I can’t believe I just looked at Kobe’s burnt up body and now I’m about to eat,” Cornell said, according to Weireter.

“Did he say that in a joking fashion?” Li asked.

Weireter paused for at least 30 seconds, crying and trying to maintain her composure before she answered.

“Yes, he did,” she said. She said she was “disgusted by it and turned away from him.”

When Li asked if she saw any business reason for viewing the photos, she answered “absolutely not.”

Weireter testified that she “didn’t want to see the pictures” and answered “yes” when asked if she was shocked and disgusted, and if the incident was hurtful.

Early on in her testimony, she described how close she was to her cousin from a young age.

“I was obsessed with her when I was little,” Weireter said. Keri was the only other girl in the family, and Weireter said she was drawn to her. As a teenager, she babysat the Altobelli children and spent a lot of time at their family home. One fire official at the gala knew of her family connection to the crash and offered his condolences, she said.

But the others apparently didn’t, and the gawking at the crash photos bothered Weireter so much she complained to the fire department about it.

Weireter testified Friday that she did so “because what he did was wrong, and something had to be done about him showing the photos off, and I didn’t want that to happen again.”

Weireter also testified that when she worked as an EMT from 2008 to 2013, she saw sheriff’s deputies photograph a suicide victim for no legitimate law enforcement purpose.

That testimony previewed what Bercovici told the jury: People within law enforcement have long photographed gory deaths for personal entertainment and because they “want something special to show their friends.”

Bryant and Chester’s lawsuits include claims for negligence, invasion of privacy, intentional infliction of emotional distress and violations of the 14th Amendment.

[Photo by Meghann Cuniff for Law&Crime.]