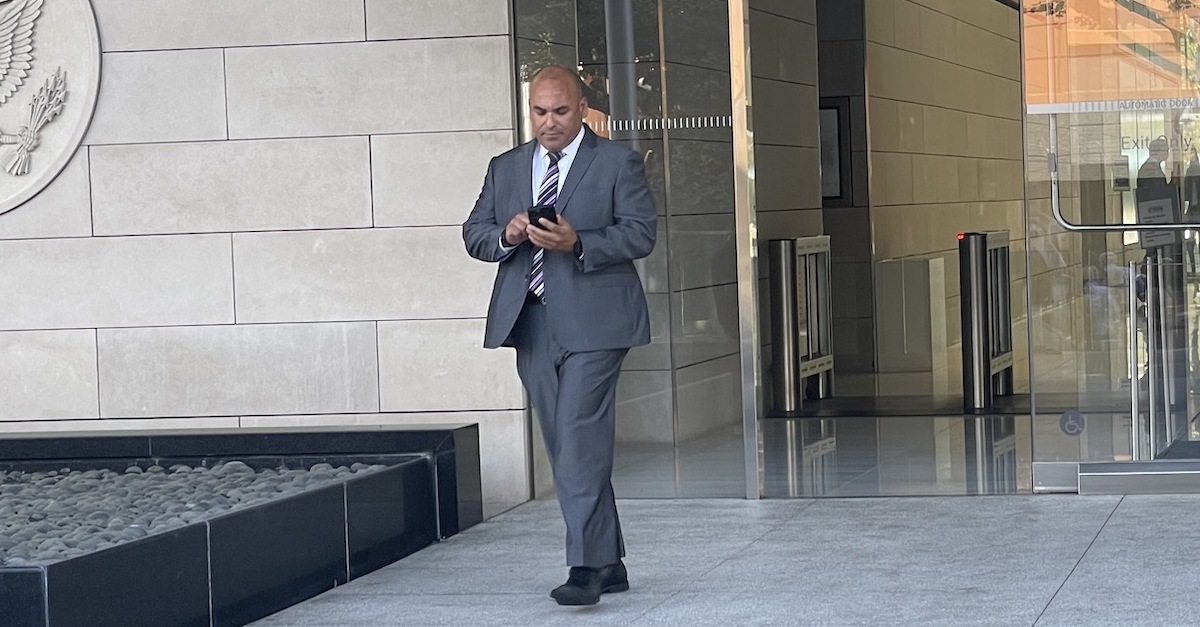 A top-ranking Los Angeles County Sheriff’s official apologized to Vanessa Bryant and Christopher Chester from the witness stand Tuesday after being pressed about apparent lies he told regarding photos a deputy shared at a bar of victims from the helicopter crash that killed Kobe Bryant, his daughter Gianna Bryant, and seven more.

Chief Jorge Valdez gave his “utmost condolences” to Bryant and Chester after Chester’s lawyer, Jerry Jackson, asked him about telling a reporter in a February 2020 email that because of  “insensitive intentions” to publish an article about the photos, the sheriff’s department was “obligated to personally contact the family members and advise them of the details surrounding your allegations.”

Hours before he sent the email, Valdez denied to the reporter in a recorded interview that he knew about a complaint from a citizen regarding the photos, despite being the sheriff’s official who dealt with the complaint a month earlier.

In a series of questions Tuesday from Jackson, Valdez said he didn’t know who contacted Chester and said it “was being handled on the chain up. Not my level.” He said he learned from Jackson at that moment that Chester never heard an apology from anyone with Los Angeles County, then gave his “utmost condolences to Mr. Chester and Mrs. Bryant” as he looked at them sitting side by side at the plaintiffs’ table. Chester’s wife Sarah Chester and their 13-year-old daughter Payton Chester died in the crash.

“Can you think of one single reason why you couldn’t have driven down to Orange County and looked him in the eye and apologized?” Jackson later asked.

Jackson’s exchange with Valdez, which ended the fifth day of trial, was previewed in his opening statement Aug. 10, in which he told jurors to remember when sheriff’s officials apologize from the witness stand that Chester has never once heard from anyone in the county about any of this.

A solo practitioner based in El Segundo, California, Jackson also asked Valdez about a press release he issued on Feb. 28, 2020, as a then-captain at the sheriff’s information bureau that called the photo incident “alleged” and said the sheriff was “deeply disturbed.” A week earlier, on the day the Los Angeles Times article published, deputies received entries on their performance records that said they wouldn’t be disciplined over the photos.

“Can you explain how the sheriff was deeply disturbed?” Jackson asked.

“I think we were all deeply disturbed, sir,” Valdez answered.

Jackson referenced the “amnesty” Sheriff Alex Villanueva gave to the deputies who shared the photos, but Valdez said he believed when he wrote the press release that the investigation was ongoing. LA County lawyers’ cross-examination of Valdez is to begin at 8 a.m. on Wednesday.

Valdez was preceded by Capt. Matthew Vander Horck, who was in charge at the Malibu-Lost Hills substation that dealt with the crash and emailed with Valdez regarding the citizen’s complaint about the photos.

As did several witnesses before him, Vander Horck was played the audio of Valdez and Villanueva denying to an LA Times reporter that he knew anything about a complaint about photos in a bar. And it was Vander Horck who emailed with Valdez about the complaint from bar patron Ralph Mendez shortly after it was received, so jurors saw a chain of emails establishing Valdez’s untruthfulness to the reporter before he took the stand.

Villanueva, who is close with Valdez, is expected to testify later in trial.

Deputy Nicholas Bonelli also testified Tuesday about speaking on the phone with Cate Brady, Kobe Bryant’s assistant, at 10:22 a.m., 37 minutes after the crash, then again at 10:41 a.m. A representative from the helicopter company also showed up saying he feared the crashed helicopter was the basketball star’s. The testimony helps Bryant and Chester’s lawyers as they argue deputies knew full well Kobe Bryant had been killed in the crash when they were sending the photos to each other, and when they took the photos.

It also sets up an argument that someone in the substation had to have tipped TMZ, which broke the news of Kobe’s death at 11:24 a.m., citing unidentified law enforcement officials.

Read coverage of the other testimony from Tuesday here.