Woman Who Pleaded Guilty to Beating Flight Attendant Gets Thrown Back in Jail, Blames Drunk Driving Arrest on ‘Small Size of Her Stomach’ After ‘Gastric Bypass’ 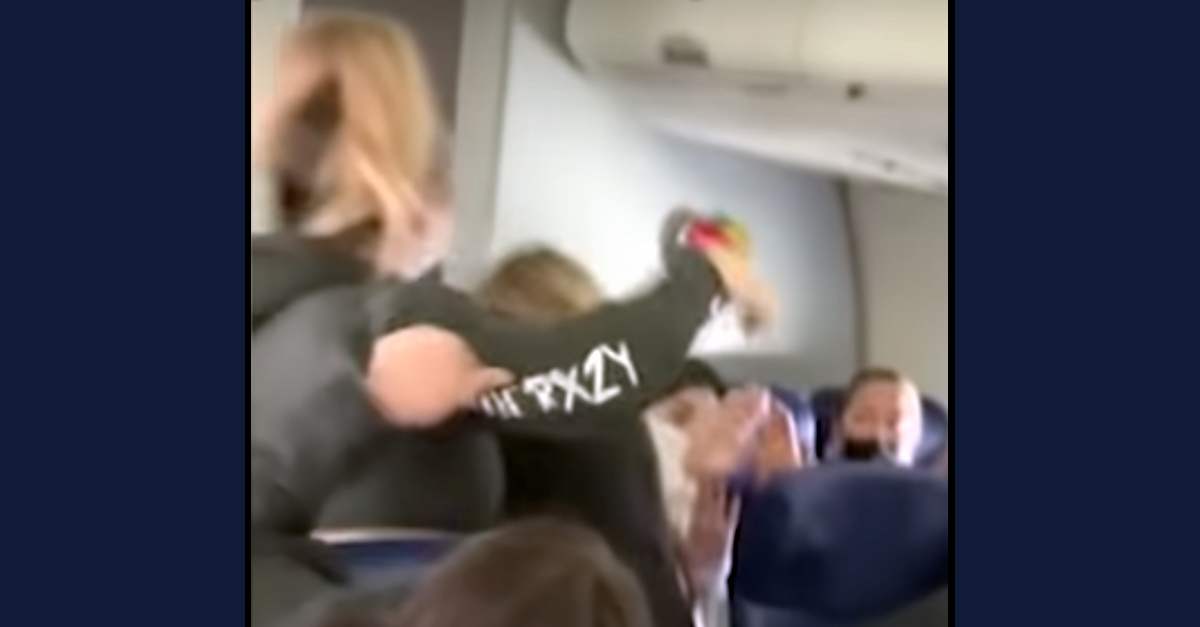 A woman who admitted throwing punches at — and severely injuring — a Southwest Airlines crewmember has been arrested in an alleged drunk driving incident while awaiting sentencing in the underlying attack on the flight attendant. That’s according to federal court papers reviewed by Law&Crime.

Those court documents say the defendant Vyvianna M. Quinonez, 28, blamed gastric bypass surgery and her reduced stomach’s intolerance to alcohol for the drunk driving arrest.  Federal prosecutors said she was a danger to the community and secured her commitment to jail time pending sentencing.

The altercation led to a two-count federal criminal complaint. It alleged (1) assault resulting in serious bodily injury on an aircraft and (2) interference with flight crew members and attendants.

“During the flight’s final descent, Quinonez was not wearing her facemask properly, unbuckled her seat belt, and pulled down her tray table—all in violation of federal rules and regulations,” the DOJ explained in a press release.  “Quinonez began filming the flight attendant on her cellphone, and . . . she pushed the flight attendant. Around this time, another passenger began filming the interaction on her cellphone.”

Quinonez pleaded guilty on Dec. 22, 2021 before a magistrate judge, and her federal court case came close to concluding with a sentencing hearing on Friday, March 11, 2022.  However, that hearing was rescheduled — apparently due in part to Quinonez’s alleged decision to violate the terms of her bond.

In September 2021, U.S. Magistrate Judge Mitchell D. Dembin, sitting in the Southern District of California, agreed that Quinonez could go free while her case proceeded. Dembin ordered a $20,000 bond and several other conditions. One was that the defendant could not “board any commercial airline flight while [her] case [was] pending.” Another was that the defendant “must not violate federal, state, or local law during the period of release,” the pretrial release order states.

That status quo was allowed to remain in effect between the plea agreement — which a federal district court judge signed off on in early January — and the defendant’s sentencing hearing. That hearing was scheduled for March 11, 2022.

“Quinonez had met her burden of proving by clear and convincing evidence that she posed neither a risk of flight nor a danger to the community,” a Feb. 17, 2022 order indicates. “As a result, Quinonez was allowed to remain on bond (pursuant to the conditions originally set by Magistrate Judge Dembin) pending sentencing.”

That changed just a short time later, according to that Feb. 17 order. It explains why:

On January 28, 2022, Pretrial Services Officer Ortiz notified the Court that Quinonez had been cited by a California Highway Patrol officer for driving under the influence with a BAC (blood alcohol content) of .08% or greater. [A] PTS [Pretrial Services] Officer characterized Defendant Quinonez’s adjustment to supervision as “poor.” The Court issued a no-bail bench warrant for the arrest of Defendant Quinonez.

The document indicated elsewhere that Quinonez was arrested Feb. 15, 2022, and hauled before Magistrate Judge Kendall Newman in the Eastern District of California on Feb. 16, 2022. Though prosecutors asked for Quinonez to be locked up “on the basis of danger to the community,” Judge Newman allowed her to go home “on a full 24 hour a day curfew and Pretrial Services supervision.” 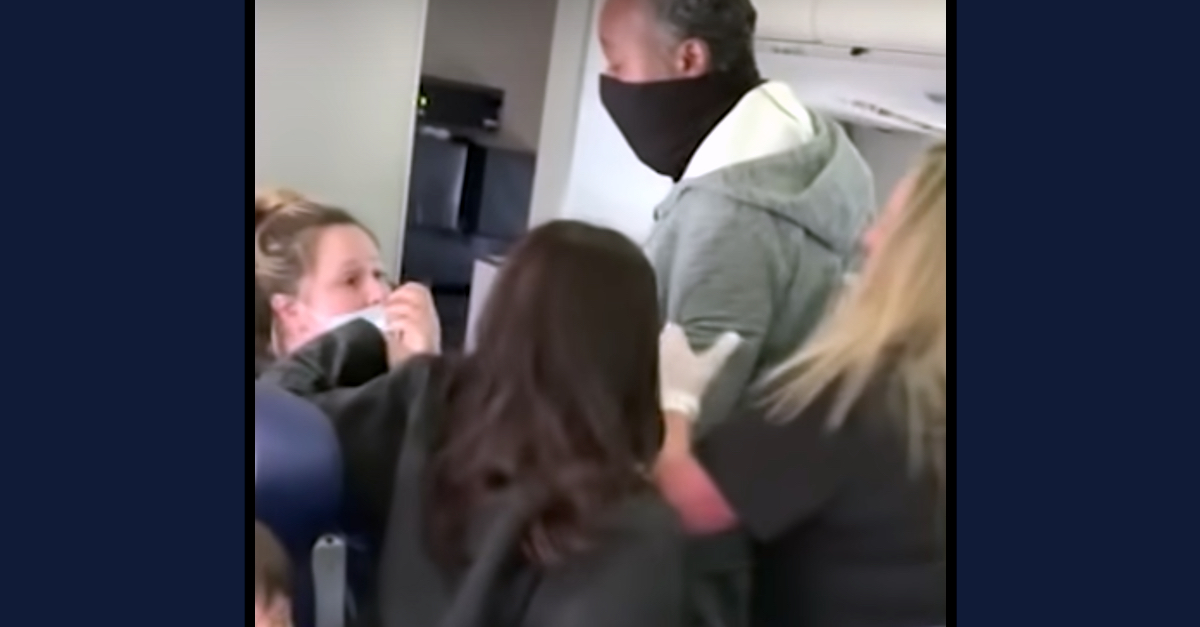 Vyvianna M. Quinonez (far left, seated) is confronted by a male passenger (center, standing) after beating a flight attendant (far right, standing, wearing dark clothes and holding onto the male’s arm with a white sanitary glove over her hand). (Image via screengrab from KABC-TV/YouTube.)

Prosecutors appealed that order back to the Southern District of California — the district here the underlying airline attack case was proceeding.  They explained that the alleged drunk driving incident happened just nine days after Quinonez was allowed to remain free pending sentencing. Here’s how federal prosecutors said the arrest went down — and how the defendant allegedly used “gastric bypass surgery” as an excuse:

Further, it appears that Defendant is not willing to accept responsibility for her actions. She claims that her high blood alcohol level is due to gastric bypass surgery. However, Defendant told pretrial services that her doctor informed her that “if she drinks alcohol, her blood alcohol concentration may rise abnormally due to the small size of her stomach.” Given this warning by her doctor, Defendant should have been especially careful about the possibility of driving while intoxicated. Yet, she showed a disregard for others on the road when she chose to drink and drive.

With the case back in the Southern District of California, U.S. District Judge Todd W. Robinson said Magistrate Judge Newman applied the incorrect legal standard to the case. The legal presumption for a post-plea (yet pre-sentence) release from custody, Judge Robinson noted, strongly favored detention; the defendant — not the government — bore the burden of proving that detention was unnecessary or unwarranted.

“However, the record as it existed on January 7, 2022, has now been supplemented by information that Quinonez drove her car while intoxicated,” the judge wrote in a Feb. 17 order.  “Her decision to engage in that conduct occurred less than two weeks after she was cautioned by the Court to obey all release conditions, including the condition to remain law abiding. Through her actions, Quinonez has now made the . . . analysis no longer a close call.”

A joint motion by the defense and the prosecution subsequently sought to push back sentencing from the originally contemplated date of March 11, 2022 because the defendant remains locked up in another federal district.

“Because the U.S. Marshal has not transporter [sic] her to San Diego, defense counsel has been unable to prepare for sentencing,” that joint motion reads.  “Ms. Quinonez and the government, therefore, here moves [sic] this Court to continue the Sentencing Hearing to May 13, 2022, a date and time acceptable to the government and the defense.”

Judge Robinson ultimately set the hearing for May 27, 2022.

Read some of the burgeoning case file below: