‘It Was All Bad’: After Woman Recorded Knocking Southwest Flight Attendant’s Teeth Out, Witness Claims ‘the Argument Went Both Ways’ 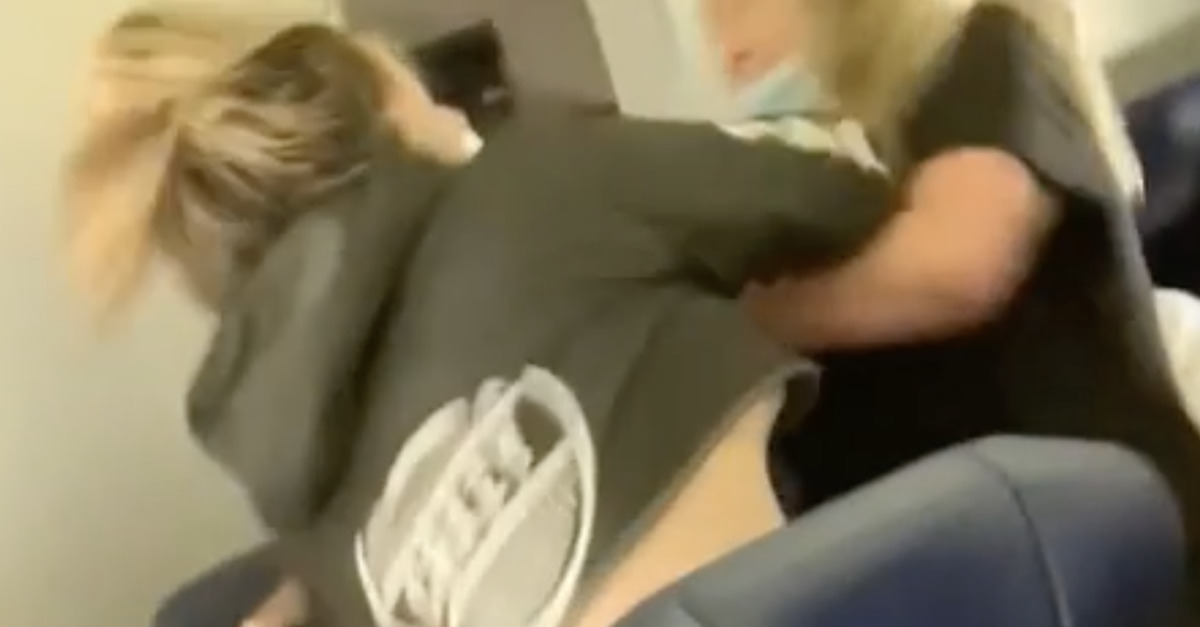 Vyvianna Quinonez, 28, was escorted off of a Southwest Airlines flight from Sacramento to San Diego last Sunday at the San Diego International Airport after an in-flight argument that wasn’t even about wearing a mask ended with a flight attendant losing two teeth.

Quinonez was subsequently charged with one count of felony battery by authorities in the Southern California city.

According to The Sacramento Bee, the defendant hails from the town of Antelope in Sacramento County and was arrested as soon as the plane landed at Lindbergh Field.

“The passenger repeatedly ignored standard in-flight instructions and became verbally and physically abusive upon landing,” Southwest Airlines spokesperson Chris Mainz said in a statement. “Law enforcement officials were requested to meet the flight upon arrival, and the passenger was taken into custody. We do not condone or tolerate verbal or physical abuse of our flight crews, who are responsible for the safety of our passengers.”

“Harbor Police officers met the aircraft at the gate and began an investigation,” a Tuesday press release from the department notes. “According to witnesses, an altercation between a passenger and a flight attendant had taken place during the flight. During the altercation, the passenger struck the flight attendant, causing serious injuries.”

On Thursday, a witness shared video of the incident.

In the footage, which appears to capture the tail-end of the fracas, a blonde female passenger swings at and connects with the flight attendant’s face. Blood immediately begins pouring from a wound as the blonde passenger grabs at the flight attendant and flails a bit before a man intervenes and breaks up the confrontation.

All three of the participants in the brief bout of fisticuffs are wearing masks in the video–though the flight attendant’s disposable mask is ripped halfway off her face by the force of the initial blow and subsequent grappling.

Michelle Manner, the witness in question, said the punch that landed was the result of “two-sided” argument that took place during almost the entirety of the flight, in comments to the Bee.

“Reports indicate it was over instructions for putting the tray table up, fastening seat belt, etc.” Mainz added in a follow-up message to the outlet. “Not mask-related.”

Surely someone knows this pajama wearing cow who attacked a flight attendant on Southwest Airlines flight 700, from…

Manner, however, claimed the flight attendant was “very rude and unprofessional the whole flight” and allegedly made unwanted physical contact with aisle-seated Quinonez while dealing with a passenger in the middle seat on multiple occasions.

“Vyvianna had said to her three times, that we could hear, ‘Get off of me. Quit touching me. Get your hands off of me,’” the witness said during an interview with local Fox affiliate KTXL.

“It was all bad,” Manner added. “It was a very shaking experience. The argument went both ways.”

The flight attendant has yet to be identified and her union is currently trying to maintain her privacy.

“Unfortunately, this is just one of many occurrences,” President and Lead Negotiator for the Transport Workers Union Local 556 Lyn Montgomery told ABC News about the latest spate of violence among the friendly skies–noting that nearly 500 similar such incidents have occurred since early April of this year.

“I’ve been in the industry since 1992, and this is the worst ever,” the union leader added. “People seem to be more angry. When they’re asked to do something, compliance seems to be more difficult.”

Quinonez was quickly booked into and then released from the Las Colinas Detention Facility.