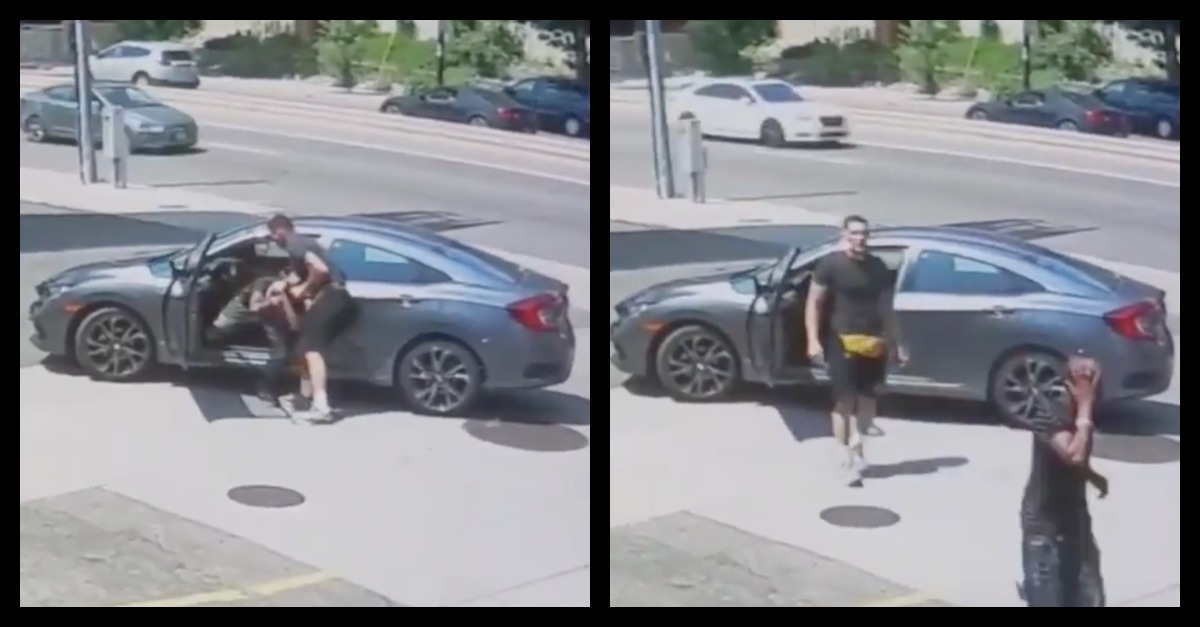 A would-be car thief was foiled by a professional mixed martial arts fighter earlier this week — and the whole incident was caught on video.

UFC fighter Jordan Williams was parked outside of a gas station in Denver, Colorado. While inside attempting to purchase a beverage and some food, a man outside made an attempt of his own.

In an instantly viral video posted on the fighter’s Instagram, the attempted carjacker can be seen nonchalantly walking up next to an idling car, opening the door, and sitting there for a few moments until Williams rushes out of the establishment — ironically giving the man a small window of opportunity to abscond with the vehicle. He doesn’t.

“If you are wondering why my car was still on its the same reason why he couldn’t drive away, I have a push to start and my car won’t go unless the keys are within 5 ft of it and I have them on me always,” Williams wrote in his Aug. 12 Instagram post. “Needless to say my lesson was learned and I hope so was his.”

“At first I couldn’t really believe it,” Williams said in comments to ESPN. “And then I was like, ‘Holy s—, there’s someone really in my car.’

“So, I run up to the car, and I have a push-to-start car,” he continued. “So, if my keys aren’t within five feet of the car it won’t drive. As I started to run towards the car it started to slowly back up. And man, the look this guy gave me on his face through the window was like, ‘Yeah, I got your car and this is happening.'”

The video, of course, shows the rest of the story.

Snacks in tow, Williams quickly rushes over to the driver’s side door and easily gets it open. Less than five seconds later, the almost-thief had high-tailed it from the scene.

“I opened the door and, it’s funny, the first thing I did was throw the stuff I bought on the passenger seat,” Williams added. “And then I proceeded to punch the guy. After the first punch he said, ‘OK, I’m sorry, I’m sorry.’ I was able to get some knees on him, as he was exiting out.”

The gas station is halfway in between Williams’s home and work. He frequently stops there and was able to obtain the security footage of the incident — as well as a still image of the halfway-culprit’s hat.

“Forgot your hat?!” the caption posted by the fighter reads.

Williams said his only regret was not inflicting a bit more damage.

“Wish I would of hit him with the trip after the clinch work when I tossed him out of the whip, and finish off with some ground and pound but I’ll settle with getting my car back,” he wrote on Instagram.

He also extolled the virtue of the fannypack he was wearing during the contretemps.

“I know you see the stillness of that fannypack, fannyback game was on point this could be a commercial for them.”

Under Colorado law, an individual is authorized to use at least some physical force in defense of property.  The relevant statute, C. R. S. § 18-1-706 (2018), reads in part as follows:

A person is justified in using reasonable and appropriate physical force upon another person when and to the extent that he reasonably believes it necessary to prevent what he reasonably believes to be an attempt by the other person to commit theft, criminal mischief, or criminal tampering involving property, but he may use deadly physical force under these circumstances only in defense of himself or another as described in section 18-1-704.

The other law referenced — C. R. S. § 18-1-704 — involves physical force in defense of one’s person, not one’s property.  (There is a significant legal distinction between the two.)  Deadly force in defense of property is only authorized under yet a third Colorado statute in cases involving arson.