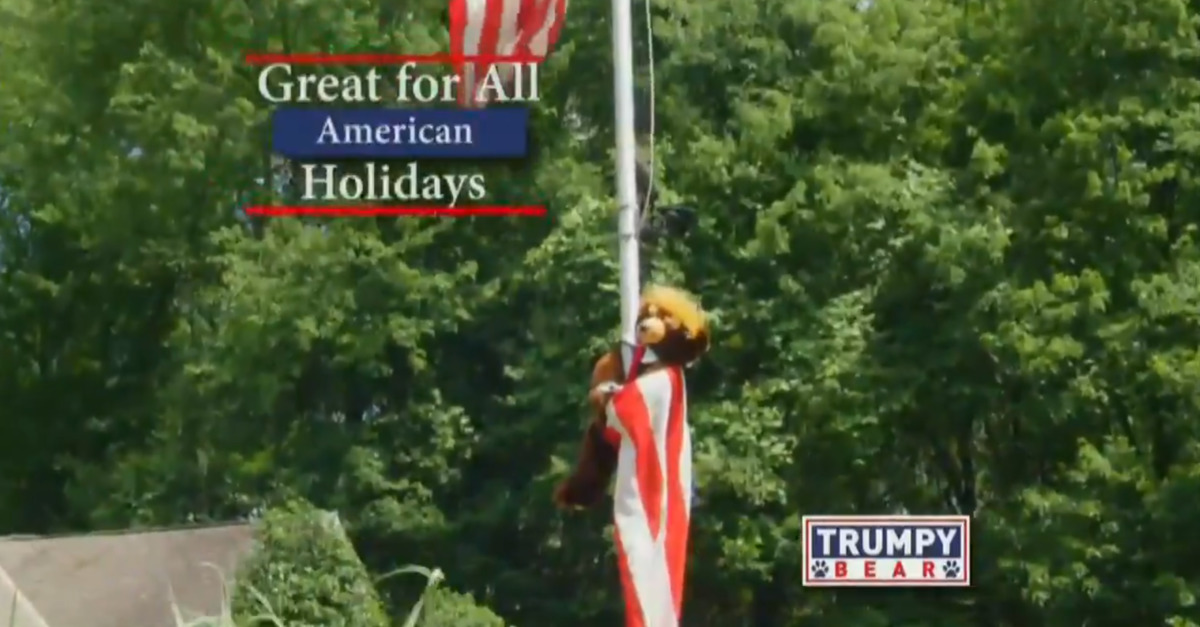 They call him Trumpy Bear. And his latest commercial runs afoul of the federal Flag Code.

“A storm is coming…you can not [sic] defeat the storm,” an announcer’s voice begins in a viral commercial for the Donald Trump-themed stuffed animal that is being sold online for just two easy payments of $19.95 plus shipping and handling.

Trumpy Bear is a plush 22″ bear with an attached 28″ by 30″ flag themed blanket. $39.90 plus $6.95 shipping. Trumpy has a zippered neck where the blanket is stored. Texas residents will be charged sales tax at the rate of 8.25%- all other states are neither collected nor remitted. There is a 30 day money back guarantee for product price only. Shipping charges non refundable. Sorry, we cannot accept returns of intentionally damaged bears. Please allow 2 to 4 weeks weeks for delivery.

“I am the storm,” the announcer ominously intones. “The great American grizzly.”

In the pitch that follows, a woman goes on to unzip a “secret zipper” in the back of the stuff bear’s neck and then removes an American flag–which the announcer insists is a “flag themed blanket.”

“Then wrap yourself in the red, white and blue for comfort and warmth,” the off-camera voice suggests. “Show your patriotism and proudly display Trumpy on any American holiday.”

In footage that could have been culled from the recesses of Michael O’Donoghue’s mind, the commercial quickly cuts from a woman literally wrapped–as the announcer suggests–in the symbols of patriotism to an even more surreal scene: Trumpy Bear clinging to a flag poll; an American flag above rippling in the breeze above; Trumpy Bear’s own “flag themed blanket” draped over his shoulders like an embarrassing welterweight; that lower flag also caressed by the low winds and moving almost in concert with the bear’s Trumpesque “trademark hair.”

While the entire commercial appears to some a parody, the product is self-evidently not at all. It’s also in direct violation of federal code on “Respect for the flag.”

No disrespect should be shown to the flag of the United States of America…(d) The flag should never be used as wearing apparel, bedding, or drapery. It should never be festooned, drawn back, nor up, in folds, but always allowed to fall free. Bunting of blue, white, and red, always arranged with the blue above, the white in the middle, and the red below, should be used for covering a speaker’s desk, draping the front of the platform, and for decoration in general…(i) The flag should never be used for advertising purposes in any manner whatsoever. It should not be embroidered on such articles as cushions or handkerchiefs and the like, printed or otherwise impressed on paper napkins or boxes or anything that is designed for temporary use and discard. Advertising signs should not be fastened to a staff or halyard from which the flag is flown.

The Flag Code, of course, is unconstitutional. While it is part of the federal code and technically a law, it lacks the force of law and is generally considered a series of guidelines for handling the national symbol of the union between the 50 current states and honoring the original 13 states.

There are no punishments or enforcement mechanisms for violations of the Flag Code, and the U.S. Supreme Court had repeatedly ruled that desecrating the American flag is a permissible exercise of the First Amendment to the U.S. Constitution.

Minor controversies involving Flag Code violations take on a perennial nature, however. Members of the Republican Party have even proposed passing unconstitutional laws that outlaw burning or desecrating the American flag.

During the summer of 2019, the GOP attempted to criticize Rep. Seth Moulton (D-Mass.) by invoking the Flag Code and mailing him a copy of the statute along with an actual flag. But this effort quickly fizzled as the GOP failed to properly fold the flag in accordance with the Flag Code.  President Trump has unsuccessfully led such a charge in recent years.