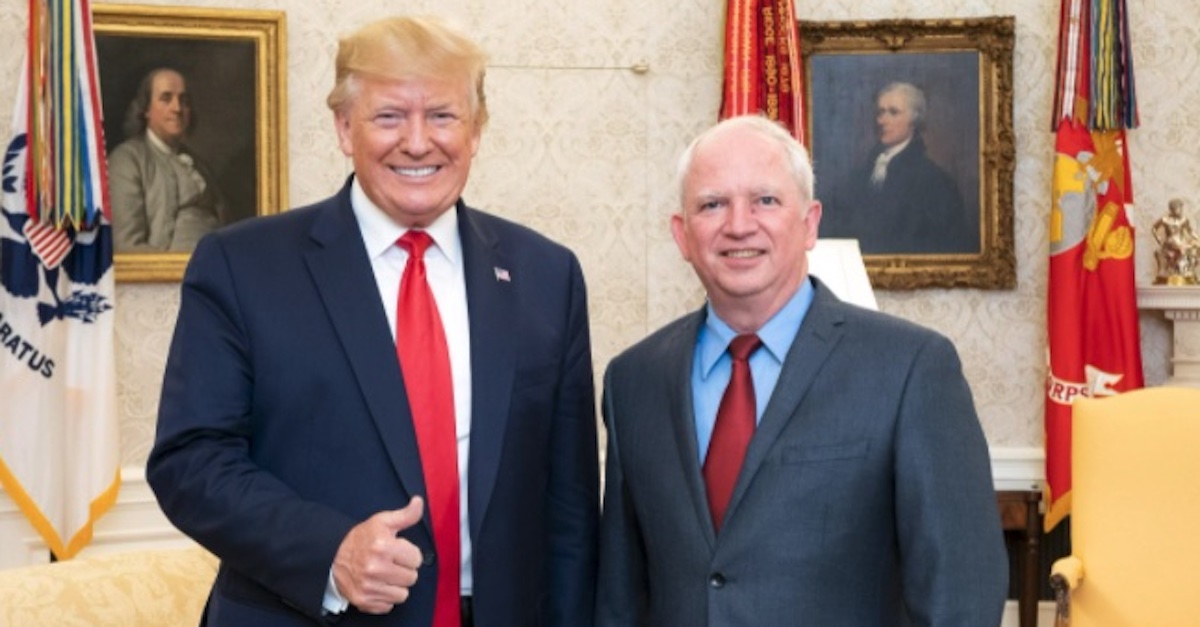 Former President Donald Trump’s pardon-curious election attorney John Eastman would like the FBI to give him back his phone.

Eastman said that his phone was seized by federal agents earlier this month as he was leaving a restaurant. The admission comes by way of a filing in a New Mexico federal district court on Monday.

The incident occurred on June 22, 2022, according to the motion for return of property, at an undisclosed eatery.

“Movant asked to see the warrant, but the executing officer refused,” the court document alleges. “Movant was frisked. Movant’s phone—an iPhone Pro 12—was seized. Movant was forced to provide biometric data to open said phone. Movant was not provided a copy of the warrant until after his phone was seized, and even then, he was only given a copy of the search warrant but not the supporting affidavit referenced in it.”

The motion goes on to say that the agents identified themselves as members of the FBI but theorizes they were operating “at the behest of the Department of Justice’s Office of the Inspector General.”

In suggesting the DOJ OIG is the agency responsible for issuing the warrant, Eastman argues that the warrant was improper.

From the filing, at length:

This warrant is unlawful for at least three reasons. First, OIG has outstripped it mandate by targeting a person outside of the Department of Justice. Second, the warrant does not describe with particularity the items to be seized, is overbroad, and provides no probable cause link to any suspected criminal activity, all in violation of the requirements of the Fourth Amendment. Third, the warrant authorized and resulted in a violation of Movant’s Fifth Amendment rights, as well as rights secured by the First Amendment, privileges that protect the right to counsel contained in the Sixth Amendment, and fundamental privacy interests.

“While movant is an attorney, movant has never worked for the Department of Justice,” Eastman’s motion notes.

Trump’s onetime attorney indeed never worked for the DOJ, but, rather, as an election attorney after the 45th president lost his re-election bid. Eastman is known to be the author of the so-called “coup memo,” a widely disparaged document based on untested legal theories that contained a plan to overturn the results of the 2020 presidential election.

Law&Crime recently reported that Eastman pleaded to be put on Trump’s pardon list in the days following the Jan. 6, 2021 attack on the U.S. Capitol Complex. That effort to secure a pardon did not pan out.

Notably, Eastman’s phone was seized on the same day that federal agents raided the home of pro-Trump attorney Jeffrey Clark, who did work for the DOJ and was also involved in efforts to deny President Joe Biden’s 2020 electoral college victory. Eastman is now at least the third former Trump attorney to have his digital devices seized as part of an investigation, following in the footsteps of Michael Cohen and Rudy Giuliani.

The seizure of Eastman’s phone is presumed to be in relation to ongoing DOJ investigations into the Jan. 6 attack. The motion does not reference criminal inquiries into that incident instead directly references ongoing civil litigation initiated by the U.S. House of Representatives.

“The cell phone that was seized contains access to movant’s email accounts, including emails that have been the subject of an intense, five-month privilege dispute between movant and the U.S. House of Representatives Select Committee to Investigate the January 6th Attack on the U.S. Capitol,” the filing says. “That litigation has received extensive media attention, so it is hard to imagine that the Department of Justice, which apparently submitted the application for the warrant at issue here, was not aware of it.”

Describing the warrant for his phone as issued in violation of the Fourth Amendment, Eastman also says the seizure also violates his First and Fifth Amendment rights and could jeopardize the rights of his clients.

“Movant respectfully requests that this court order OIG to return Movant’s property—both the cell phone and ‘all information’ in it, as well as to destroy all copies of any information that has already been retrieved or copied from the device,” the motion concludes. “Movant further requests that any access to the cell phone and its information be stayed until he has a full and fair opportunity to assert and protect his Constitutional rights and the privileged communications of his numerous clients.”

Eastman’s motion can be read in full below: