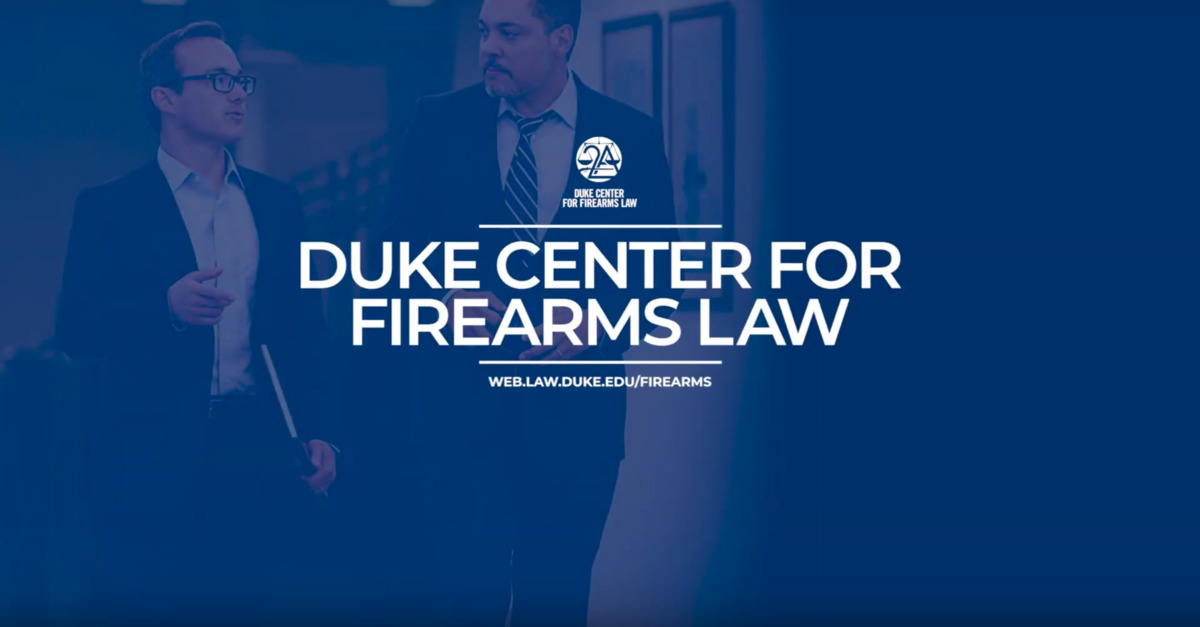 A law school center dedicated to firearms scholarship found itself on the receiving end of a barrage of complaints and head-shaking on Christmas Day after a controversial post on Twitter.

“Although Nashville, TN passed an ordinance in 1893 prohibiting the firing of guns, pistols, and combustible fireworks, a special exception was made from sundown of Christmas Eve to 10 o’clock on Christmas night,” the Duke Center for Firearms Law tweeted late afternoon on December 25, 2020.

Appended to the tweet was a link to the ordinance and exception in question–contained in the center’s repository of historical gun laws.

Ordinances of Nashville, Regulations to Prevent Fire, § 652. If any person or persons shall fire any gun or pistol, cast, throw or fire any squib, rocket, cracker, or other combustible fire-works within the limits of the corporation, every such person, for every such offense, shall forfeit and pay the sum of five dollars; but especial exception to this Provision and penalty shall be made from sundown on Christmas Eve until 10 o’clock Christmas night; also from sunrise to 10 P.M. on the eight of January, twenty-second of February, and fourth of July; Provided, That no portion of such excepted periods shall fall on Sunday; Provided also, That during such excepted time, no guns, pistols, fire-crackers, or other combustible shall be fired or thrown from or upon any street, thoroughfare, or unenclosed lot within the limits of the city of Nashville, under the foregoing prescribed penalties.

The center was founded in 2019 and describes itself as having a “two-fold mission” to “help support and build the scholarly field of firearms law; and [t]o serve as a balanced and reliable resource on firearms law for scholars, judges, lawyers, policymakers, journalists, and interested citizens.”

The tweet itself was billed as part of a social media campaign highlighting one “#HistoricalGunLawADay.”

But the choice of the gun law itself–particularly the locality involved–was immediately savaged online.

“Read the fucking room, Duke Center for Firearms Law,” one Twitter user wrote in a widely-shared post that was also highly representative of the criticism aimed at the offending tweet’s celebratory mood.

“Very interesting” another poster noted, “but given this morning’s explosion, perhaps not the most sensitive or respectful to Nashville residents.”

As Law&Crime previously reported, a mysterious explosion injured three people in downtown Nashville on Christmas morning. None of the injuries were major, according to the Nashville Fire Department. Footage of what appears to be the explosion suggests that the person or people responsible made efforts to warn people away from the site of the blast. Still, the Duke law school center was heavily chastised for their apparent tone-deafness in spite of the Christmas Day explosion.

The Metro Nashville Police Department later alleged that the explosion was caused by a recreational vehicle:

BREAKING: This is the RV that exploded on 2nd Ave N this morning. It arrived on 2nd Ave at 1:22 a.m. Have you seen this vehicle in our area or do you have information about it? Please contact us via Crime Stoppers at 615-742-7463 or online via https://t.co/dVGS7o0m4v. @ATFHQ pic.twitter.com/JNx9sDinAH

The tenor of the criticism the center received was perhaps best encapsulated thusly: “Have you even looked at the news today? Give the gift of deleting your account.”

It is unclear whether the tweet was scheduled or whether it was sent in direct response to the explosion. The tweet contains a hashtag stating that the center was in the process of tweeting a historical gun law each day, and the center’s Twitter history does contain a a long list of previous tweets on different days which examined similar historical gun regulations.

Law&Crime repeatedly reached out to the Duke Center for Firearms Law for comment and clarification on this story but no response was forthcoming at the time of publication.