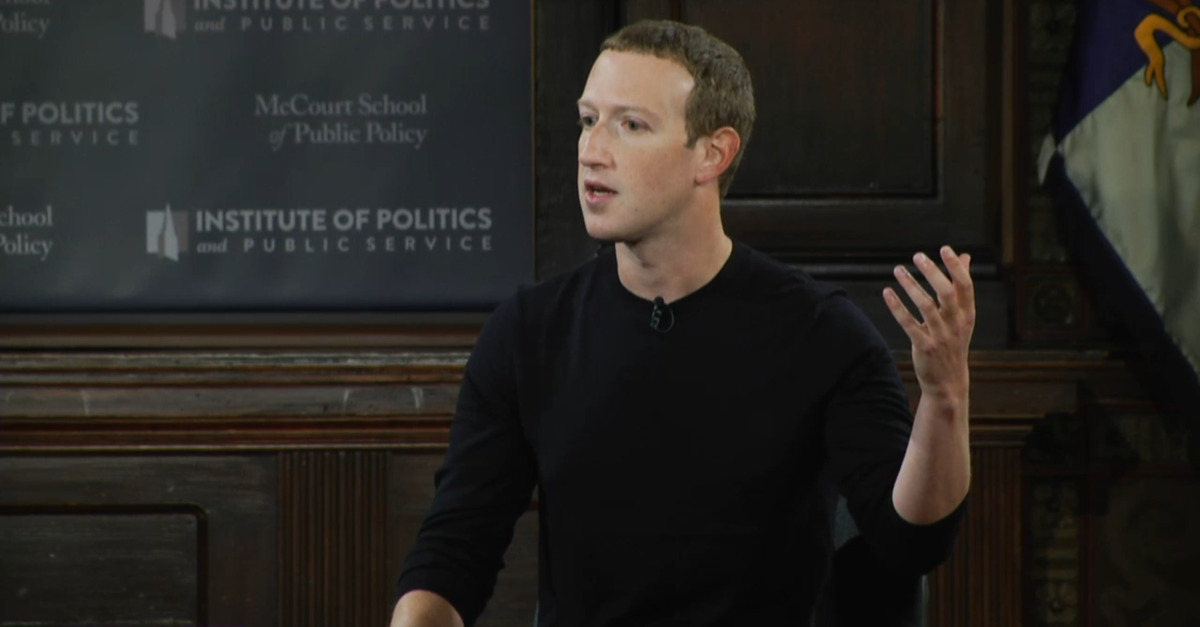 A group of peaceful protesters says they were ejected from a so-called “Free Expression” event featuring a speech by Facebook’s Mark Zuckerberg at Georgetown University on Thursday afternoon.

Activists with the Freedom From Facebook campaign were protesting Facebook’s alleged media monopoly and promotion of “exaggerated and blatantly false stories,” according to a press release sent out by the group on Thursday morning.

“That Zuck claims to be supporting free speech is laughable,” the release said. “Facebook actively encourages lying in the name of making more money. Zuck has single-handedly created a monopoly that is…putting traditional news out of business.”

“Zuckerberg’s interests lie in financial domination not freedom of expression,” said Freedom From Facebook Co-Chair Sarah Miller via email. “The only speech he cares about is encouraging more lies and hate on Facebook to make more money and grow his monopoly.”

During the speech, the Facebook CEO described his attitude toward free expression as walking a fine, dual-pronged line.

“I believe that we have two responsibilities: to remove content when it can cause real danger as effectively as we can; and to fight to uphold as wide of a definition of freedom of expression as possible and to not allow the definition of what is considered dangerous to expand beyond what is absolutely necessary,” he said.

Thursday afternoon came and so did the protest–during which the anti-Facebook activists were removed for handing out literature calling for Facebook to be broken up under U.S. antitrust laws.

As we speak, Zuck is blustering on, answering carefully-curated questions before a tightly controlled audience; we wonder if he has any comment on this?

A spokesperson for Facebook spoke with Law&Crime via phone and generally disputed the group’s characterization of what occurred.

Freedom From Facebook told Law&Crime, however, they were ejected from Georgetown’s campus after just a few minutes of passing out their anti-Facebook and anti-monopoly signs.

According to a recap, Zuckerberg spoke during “A Conversation On Free Expression,” which was sponsored by Georgetown’s McCourt School of Public Policy and its Institute of Politics and Public Service. The Facebook CEO then participated in a Q&A session.

Freedom From Facebook were quick to point the irony of their ejection from an event promoting “Free Expression.”

“The absurdity of this event can’t be understated,” Miller told Law&Crime. “We were removed for exercising our First Amendment right outside the event, while inside press were barred from asking questions and the student questions that were allowed were carefully-selected. The quashing of expression at this laughably fraudulent free speech event only highlights Zuck’s true motives: reputation management and money.”

Freedom From Facebook is an offshoot of the Open Markets Institute, an independent and non-partisan think tank dedicated to decreasing the influence of aggregated private power over American life.

According to the think tank’s website, the group uses journalism, coalition-building and activism to “address threats to our democracy, individual liberties, and our national security from today’s unprecedented levels of corporate concentration and monopoly power.”