After John Eastman Invoked the Fifth, His Lawyers Compared Him to Ruth Bader Ginsburg and Thurgood Marshall: People with ‘Unpopular Legal Theories’ 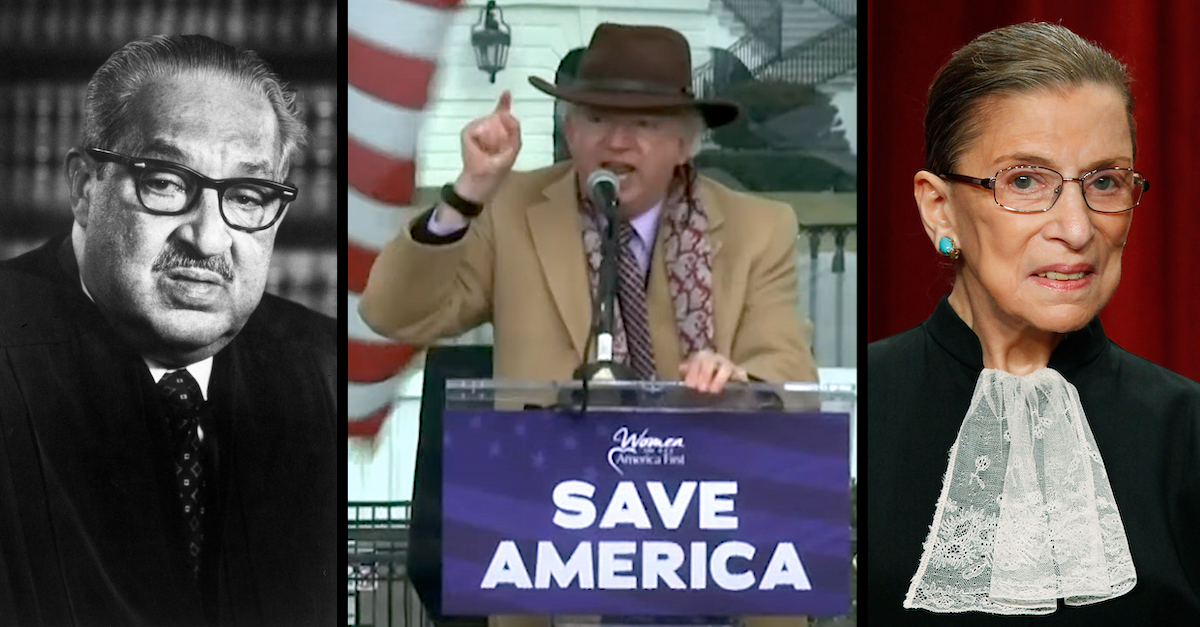 In a comparison that drifts heavily into the realm of advocacy, attorneys for conservative lawyer John Eastman compared their client to three famous liberal legal thinkers from the pages of American history.

The comparison came as attorneys Charles Burnham and Harvey Silverglate announced that Eastman invoked his Fifth Amendment privileges when called to testify before a Fulton County, Georgia Special Grand Jury on Wednesday in connection with his attempts to keep Donald Trump in the White House despite the outcome of the 2020 election.

“[W]e advised our client John Eastman to assert attorney client privilege and the constitutional right to remain silent where appropriate,” Burnham and Silverglate said in a statement. “Out of respect for grand jury secrecy we will not disclose the substance of the questions or testimony. We wish to thank the grand jurors for their service.”

That statement continued by lambasting the Fulton County District Attorney’s office for having allegedly “set itself on an unprecedented path of criminalizing controversial or disfavored legal theories, possibly in hopes that the federal government will follow its lead.”

“Criminalization of unpopular legal theories is against every American tradition and would have ended the careers of John Adams, Ruth [Bader] Ginsburg, Thurgood Marshall and many other now-celebrated American lawyers,” the duo continued. “We ask all interested observers of any political persuasion to join us in decrying this troubling development.”

The comparisons are interesting.  Adams was the second U.S. President who previously championed notions of “fundamental rights” and helped personally negotiate and sign the Treaty of Paris to end the American Revolution.  Ginsburg was the pro-choice U.S. Supreme Court justice who, through her decisions and dissents, regularly championed gender equity from her perch on the bench.  Marshall was the nation’s first Black U.S. Supreme Court justice.

Eastman, meanwhile, “resigned” (according to some reports) or “retired” (according to others) as a Chapman University law professor after speaking in support of Trump on the Ellipse in Washington, D.C., on Jan. 6, 2021.  He was also subjected to an ethics probe by the California State Bar.

Eastman wrote a six-page document entitled “January 6 scenario.” The missive was widely dubbed a “coup memo” because of its multi-pronged suggested paths toward overturning the 2020 election.  One of the ideas floated in the harshly criticized memo was to advise then-Vice President Mike Pence to stop or delay the election’s certification.

Eastman spoke at Trump’s rally on the Ellipse before throngs of supporters walked to the Capitol and laid siege to the building.

“All we are demanding of Vice President Pence is this afternoon at 1:00 he let the legislatures of the state look into this so we get to the bottom of it and the American people know whether we have control of the direction of our government or not,” Eastman said in fiery tones while being watched and applauded by Rudy Giuliani, who was also on stage.

Eastman blamed the Jan. 6 siege on Pence’s ministerial decision to allow Congress to certify the election for Joe Biden, the Washington Post reported.

Eastman also asserted on CNN that he was not responsible for whipping up the crowd prior to the breach.

Trump was “told repeatedly that Mike Pence lacked the Constitutional and legal authority” to refuse to certify the election, Rep. Liz Cheney (R-Wyo.) has said during Jan. 6 Committee hearings.  “But President Trump plotted with a lawyer named John Eastman to pressure Pence to do so anyway. As a federal court has explained, ‘based on the evidence, the Court finds that it is more likely than not that President Trump and Dr. Eastman dishonestly conspired to obstruct the Joint Session of Congress on January 6, 2021.'”

The Jan. 6 Committee ascertained that Eastman eventually asked to be put on a pardon list and invoked his Fifth Amendment rights more than one hundred times when questioned by that Committee.

Eastman and other Trump lawyers and supporters were concomitantly subpoenaed in Georgia in connection with their vocal efforts to keep Trump in office.  Among the others asked to sit and talk about their plans to purloin the Peach State’s electoral college votes for the benefit of the 45th president were attorneys Kenneth Chesebro, Cleta Mitchell, and Jenna Ellis.  Right-wing podcast host Jacki Pick Deason and Sen. Lindsey Graham (R-S.C.) were also subpoenaed, Law&Crime reported previously.

A special purpose grand jury was empaneled in Fulton County in May of this year, according to a subpoena issued to Rudy Giuliani.  It is “authorized to investigate any and all facts and circumstances relating directly or indirectly to possible attempts to disrupt the lawful administration of the 2020 elections in the State of Georgia.”

Those proceedings must now grind along sans the answers to several questions posed to Eastman.