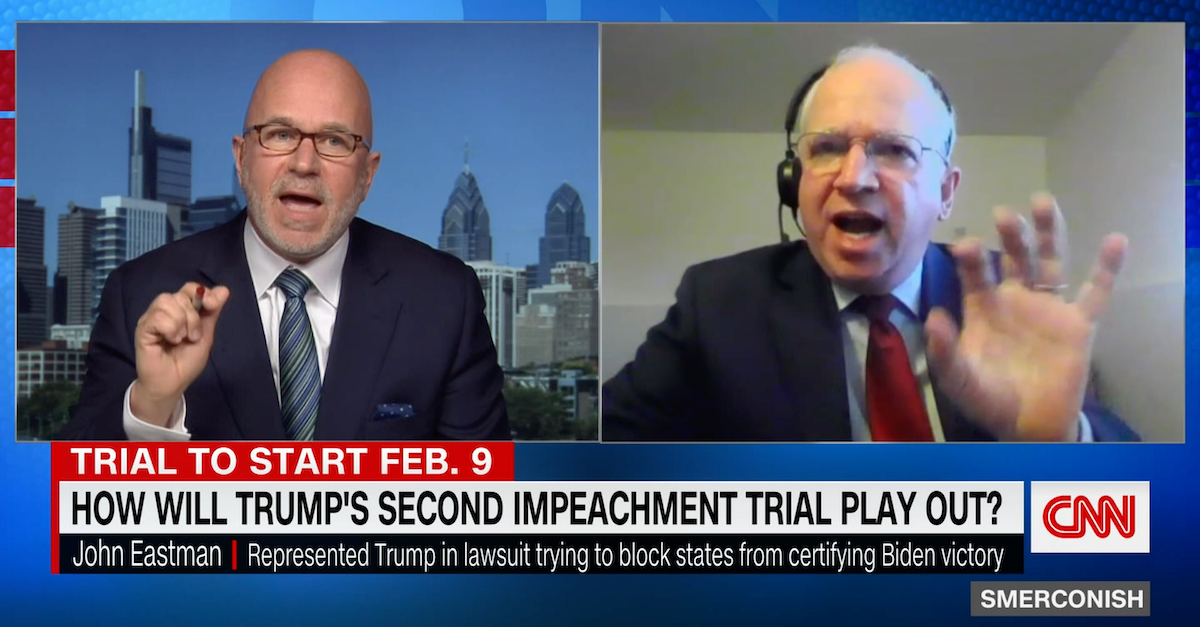 John Eastman, the law professor who “resigned” (or “retired“) from Chapman University after speaking at then-President Donald Trump‘s “Save America” rally on Jan. 6, on Saturday morning argued that what happened later that same day at the U.S. Capitol was in no way incited by the words he used alongside Trump at the rally.

Eastman made the comments on CNN.

Eastman’s representation of Trump has caused controversy.  The university told him to stop using his school email and address in pro-Trump court papers late last year.  After the siege on the capitol, Chapman University President Daniele C. Struppa said “Eastman’s actions are in direct opposition to the values and beliefs of our institution.”  The next day, Struppa said he would not act as if he were “above the law” by firing Eastman; four days after that, he announced Eastman was retiring.

Eastman’s retirement apparently involves fighting for his image on cable news.  He began his CNN appearance by saying he couldn’t represent Trump in the ex-president’s presumed upcoming impeachment trial because he was a witness to the speech which preceded the siege on the U.S. Capitol Complex.  But he said it was wrong to draw connections between the speeches and the siege and said the senate didn’t even have the legal ability to try Trump.

He added that the “impeachment power is for removal of officers” and noted that Trump is “no longer an officer of the United States”.

Smerconish then asked Eastman to judge the events at the capitol from the time of the rally. Smerconish wanted to know if Eastman had the sense to predict while he was speaking what might happen at the U.S. Capitol Complex after the rally.

Dozens have been arrested and several were killed after Trump said his followers should “walk down” to the capitol and that he would “be there with” them.

“You’ll never take back our country with weakness,” Trump then added on Jan. 6. “You have to show strength, and you have to be strong.”

Despite those comments, Eastman refused to draw a connection between the speech and the siege.

“The half million people” who attended the Trump rally “were not part of the incursion that was going on in the capitol,” Eastman said. He asserted that the siege began before the Trump rally ended.

“You and I both know — come on — it’s walking distance,” Smerconish retorted.

Smerconish then claimed that it took about fifteen minutes to walk from the rally location to the capitol building. (Google Maps estimates that it takes about half an hour.)

Eastman challenged Smerconish to provide specific evidence that specific rally attendees were later committing crimes in or around capitol.

Smerconish demurred but pressed Eastman further by asking him if he knew anyone was going to breach the capitol that day.

“We had no knowledge of that,” Eastman said, apparently speaking for himself and others at the podium during the “Save America” rally.

Eastman said a “paramilitary group” and “ANTIFA groups” were “organizing” the siege “three to four days ahead of time.”  He cited The Washington Post as the source of some of his information; however, the Post report he appeared to reference does not support his thesis.

The Post reported on Jan. 17 that “an array of established conservative insiders and activists” helped bring people to Trump’s rally.  It explicitly refused to make the connection that the siege was planned by outside groups:  “Organizing warm-up events is not the same thing as plotting to invade the Capitol. But before the rallies, some used extreme rhetoric, including references to the American Revolution, and made false claims about the election to rouse supporters to challenge President-elect Joe Biden’s victory.”  The report nowhere mentions ANTIFA.

Smerconish noted that Rudy Giuliani warned of “trial by combat” during the “Save America” rally. Smerconish then cited Donald Trump’s comments which encouraged rally goers to walk to the capitol. Then, he played Eastman’s own comments at the rally.

“We no longer live in a self-governing republic if we can’t get the answer to this question.  This is bigger than President Trump.  It is the very essence of our republican form of our government and it has to be done,” Eastman said with reference to stopping the certification of Joe Biden as victor. “And anybody that is not willing to stand up to do it does not deserve in the office. It is that simple.”

Smerconish asked Eastman if he was prepared to take responsibility for inciting the crowd to commit violence at the capitol.

Eastman said his statements at the rally didn’t come close to incitement. He said all he wanted was for Mike Pence to delay the senate’s count of electoral votes. (Federal law required the count to occur on Jan. 6, so it arguably could not have been delayed.)

Eastman suggested Congress had a duty to do more than to merely act as a “potted plant” and to simply count the votes the states certified.

Smerconish then pressed Eastman on his comments about Pence.

Eastman said at the rally that Pence did “not deserve to be in . . . office” if Pence did not challenge the certified victory of Biden.

What followed was a group of people at the siege screaming “hang Mike Pence!” over and over again.

“You don’t see any causal connection between your words and the ‘hang Mike Pence’ chants that followed?” Smerconish asked.

Eastman said the capitol was “two miles away” from the Ellipse, the site of the rally. (It’s actually about a mile and a half.) He vociferously argued that anyone interpreting his speech at the rally as an incitement of violence was taking his words terribly out of context.

Smerconish didn’t let up during the increasingly feisty exchange.

“Do you think that the point you’ve just made was something grasped by the individuals who stormed the capitol?” the host asked with reference to Eastman’s claims that people mistook his words.

At least one of the arrested protesters’ attorneys suggested that his client interpreted the rally as a call to storm the capitol.  Others have made similar statements.

“The people that stormed the capitol were not in the earshot of what I said,” Eastman said.  He said his point “was grasped by the half million people on the mall up at the White House.”

“They all understood . . . that I . . . immediately said what we’re demanding of Vice President Pence is that he merely delay the proceedings enough at the request of these legislatures to allow them time to review whether their certificates of electors were illegally cast — that’s all!” Eastman explained.  “And . . . to take it out of context and to tie it in to something happening two miles away that had no connection with it — I think is really dishonest!”

Smerconish said he didn’t take anything out of context and added that he was merely trying to make the sort of argument that he anticipates will be part of Trump’s upcoming trial in the senate.

Nowhere did Smerconish argue, nor did Eastman acknowledge, that the two alleged groups — one which Eastman said was peaceful at the rally, one which trashed the capitol — could have been in touch by streaming media, social media, or by phone.  The Trump rally was live streamed on the internet by popular conservative channels and by mainstream outlets.

Eastman’s argument that the groups were separate also completely ignored televised statements by rally goers that they “started” the day at the Trump speech and then “all headed over together to the capitol” at “about 1:00.”

“What happened at the capitol was a travesty,” Eastman said; he then added that everyone involved with malfeasance at the capitol “should be prosecuted to the fullest extent of the law.” But he also said “state election officials violate[d] election laws in order to put the thumb on the scale for one candidate over the other” and that the election was not “fair.”

Eastman’s comments to CNN mirror some of those from the rally.

“All we are demanding of Vice President Pence is this afternoon at 1:00, he let the legislatures of the state look into this so we get to the bottom of it and the American people know whether we have control of the direction of our government or not,” Eastman said at the Jan. 6 “Save America” rally in Washington, D.C.  “Let’s have trial by combat,” Giuliani said as Eastman stood nearby.

Last year, Eastman authored a legally bizarre opinion piece in Newsweek.  It wildly suggested that Vice President Kamala Harris was ineligible to serve in the position she now holds because her parents were immigrants who had not yet obtained citizenship when Harris was born in Oakland, Calif., in 1964. Eastman said Constitution was “originally understood” to exclude candidates of Harris’s background.  Here’s how Eastman framed his poorly received, widely criticized, and legally debunked argument:

The 12th Amendment provides that “no person constitutionally ineligible to the office of President shall be eligible to that of Vice-President of the United States.” And Article II of the Constitution specifies that “[n]o person except a natural born citizen…shall be eligible to the office of President.” Her [Kamala Harris’s] father was (and is) a Jamaican national, her mother was from India, and neither was a naturalized U.S. citizen at the time of Harris’ birth in 1964.

Eastman went so far as to accuse others of “cavalierly” accepting Harris’s eligibility.

Harris’s father became a naturalized U.S. Citizen at some point prior to 2015, an archived Stanford University biography indicates.

Newsweek has since flagged Eastman’s original piece as a “minority legal argument.”

[image via screen capture from CNN]

Editor’s note:  this piece has been updated.  Its original version accidentally used the word “Chapman” to reference Eastman in several places.  It accurately stated upon first reference that Giuliani used the phrase “trial by combat” at the Jan. 6 rally but accidentally attributed those words to Eastman on second reference.