House GOP Rattles Off List of Alleged ‘Biden Family’ Crimes, Says Investigating Jan 6. Capitol Breach Is Not a Priority at All 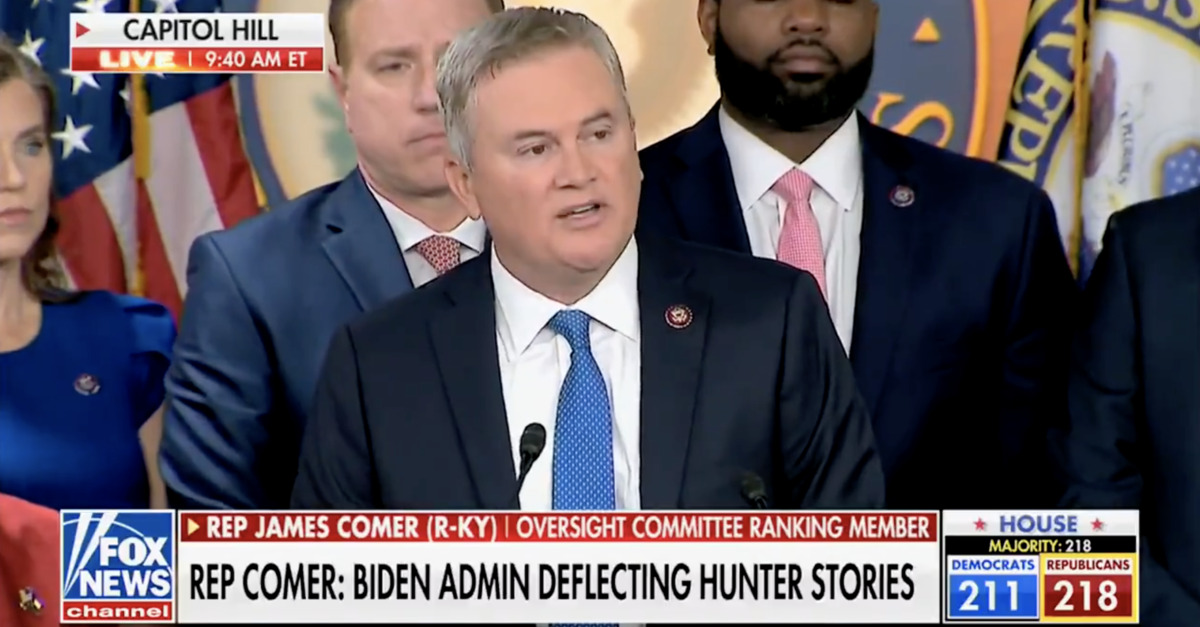 Republicans in the U.S. House of Representatives on Wednesday said their first priority after obtaining control of the chamber would be to investigate a series of alleged crimes committed by the “Biden family.”

Rep. James Comer (R-Ky.) is in line for the gavels of the House Oversight and Reform Committee after the GOP narrowly obtained the needed 218-seat majority in last week’s midterm elections. During a press conference, he outlined the committee’s investigative focus – based on Hunter Biden‘s laptop, alleged whistleblower complaints, and financial “documents” he said Republicans had “received.”

“This is an investigation of Joe Biden, the president of the United States,” Comer told reporters in Washington, D.C. “And why he lied to the American people about his knowledge and participation in his family’s international business schemes. National security interests require the committee conduct investigation and we will pursue all avenues – avenues that have long been ignored.”

The incoming committee chair detailed a bevy of alleged crimes:

“What we found are business plans aimed at targets around the world based on influence peddling, including with people closely tied to foreign governments like China and Russia,” Comer went on to tell reporters. “We also found plans based in the United States where the Biden family swindled investors of hundreds of thousands of dollars — all with Joe Biden’s participation or knowledge.”

To date, no members of Biden’s family have been charged with – or accused of – any such crimes by law enforcement.

A 31-page interim oversight committee staff report by the GOP, issued Thursday morning, does not make specific allegations about the Biden family or their alleged crimes. Indeed, the report stops short of listing any of the specific crimes listed by Comer during his speech.

The report is titled: “A President Compromised: The Biden Family Investigation.” While lacking specific allegations, it does, however, accuse the Biden family of “corruption” and “self-dealing” and says the Biden family’s business deals pose a threat to “national security.”

During the press conference, Comer said that “letters” had been sent to various Biden administration officials and “Biden family associates” requesting documents “relevant” to the apparently wide-berth investigation into the 46th president and his family.

“In the 118th Congress, this committee will evaluate the status of Joe Biden’s relationship with his family’s foreign partners and whether he is a president who is compromised or swayed by foreign dollars and influence,” the ranking GOP member of the committee said before reiterating: “I want to be clear, this is an investigation of Joe Biden.”

“This investigation will be a top priority,” Comer noted.

The focus on the Biden family was contrasted with the ongoing investigation into the Jan. 6, 2021 attack on the U.S. Capitol.

During the press conference, a reporter asked what Comer planned to do with the extant Jan. 6th investigation.

“I think that’s a question for Kevin McCarthy,” he said, referring to the California Republican likely to be the next speaker. “We’re focused on a lot of investigations now. That wasn’t one of them.”

House Republicans on social media mounted something of a united front on Thursday – with many members of the congressional GOP sharing and boosting videos of the press conference, myriad accusations against the “Biden family,” and links to the interim report.

“The Biden family business model is built on Joe Biden’s political career and connections with Joe Biden as the ‘chairman of the board,’” Comer added in a press release. “Biden family members sold access for profit around the world to the detriment of American interests. If President Biden is compromised by deals with foreign adversaries and they are impacting his decision making, this is a threat to national security. The American people deserve transparency and accountability about the Biden family’s influence peddling. With the new Republican majority, Oversight Committee Republicans will continue pressing for answers to inform legislative solutions to prevent this abuse of power.”

By late Thursday morning, the Senate GOP apparently got the all-hands-on-deck memo as well.

Wray demurred, saying he was not going to discuss “a number of personnel matters” for “reasons that I’m sure you can appreciate.”