Texas Lt. Governor Is Literally Offering People Up to $1 Million to Come Up with Evidence of Voter Fraud 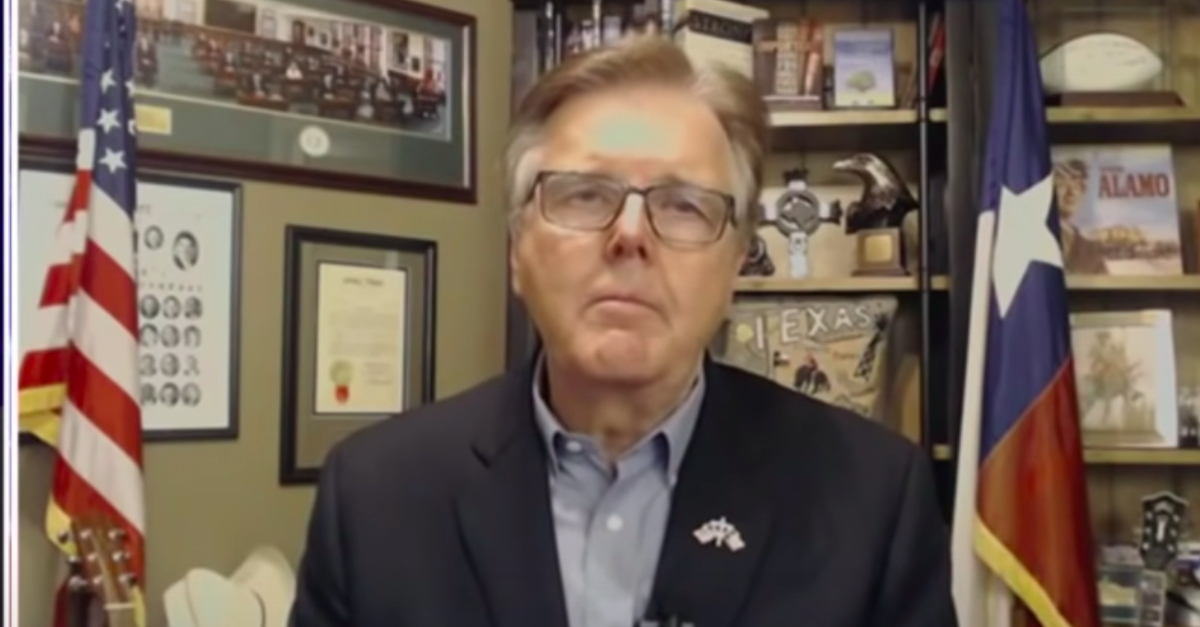 Texas Lt. Governor Dan Patrick (R) on Tuesday announced that he is offering a reward of up to $1 million from his campaign account for “whistleblowers and tipsters” from anywhere in the nation that are able to come forward with evidence of voter fraud, several local news outlets reported Tuesday. Patrick’s payment-based search for proof of fraud further highlighted the fact that claims of widespread cheating in the 2020 election have been entirely unsubstantiated.

In light of the Trump campaign’s voter fraud hotline being inundated with prank calls mocking the effort earlier this week, Patrick directed people who believe they have new information to turn over any evidence to local law enforcement authorities. Any information that subsequently leads to a conviction of voter fraud will result in the tipster being paid “a minimum of $25,000.”

The lieutenant governor made clear that he fully backs President Donald Trump, who’s been erroneously claiming that he defeated President-elect Joe Biden in the 2020 election. For months Trump has repeatedly promulgated falsehoods about the security of voting by mail and said the only way he could lose the election was if there was widespread voter fraud.

“I support President Trump’s efforts to identify voter fraud in the presidential election and his commitment to making sure that every legal vote is counted and every illegal vote is disqualified. President Trump’s pursuit of voter fraud is not only essential to determine the outcome of this election, it is essential to maintain our democracy and restore faith in future elections,” Patrick said in Tuesday’s statement.

Patrick then repeated several debunked allegations about ballot tabulation processes in an effort to blame Democrats for instilling doubt in the process.

“The Democrats have no one to blame but themselves for creating suspicion of final vote totals. Not allowing Republican poll watchers to observe the vote count in multiple states, in some cases blocking their view with poster board, last minute changes in election laws in battleground states, ignoring the deadline to vote and accepting ballots for days after the election, ignoring postmarks and signature checks, not verifying that mail-in ballots were being sent to people who were alive or living in the state and voting machines that have been a concern for over a decade all raise serious questions,” he continued. “In Texas we know voter fraud is real. In just the last 60 days, we have had three major arrests on voter fraud including a social worker who was arrested last week for allegedly registering almost 70 developmentally disabled adults to vote without their signature or consent.”

In a rather misleading claim, Patrick proclaimed that the counting “delays” incurred by other states raised “more questions about voter fraud and potential mistakes,” saying Texas “counted 970,000 mail-in ballots last Tuesday,” but that is not true. Under Texas law, counties with a population of 100,000 or more begin counting ballots after polls close on the last day of in-person early voting, though those results are not released until Election Day.

On the other hand, critical swing states such as Pennsylvania, Michigan, and Wisconsin were not permitted to start counting their mail-in ballots—a process that takes much longer than tabulating in-person votes—until polls opened on Nov. 3. Republican legislatures in those states set it up this way.

“President Trump is absolutely right to pursue every allegation of voter fraud and irregularities, just as Al Gore did in 2000. Every candidate for public office has this right. My goal is to ensure that, regardless of the outcome, every American has faith in our electoral process and our democracy,” Patrick concluded.

In 2000, George W. Bush beat Al Gore in Florida by 537 votes. The 2020 election is no comparison to that; Biden is clearly ahead by tens of thousands of votes.

Attorney Matthew Segal, the Legal Director of the ACLU of Massachusetts, commented that Patrick’s offer “sets up a possible scenario in which someone commits voter fraud by making a false report in service of Trumpism, is convicted, and then seeks to claim the reward.”

This sets up a possible scenario in which someone commits voter fraud by making a false report in service of Trumpism, is convicted, and then seeks to claim the reward.