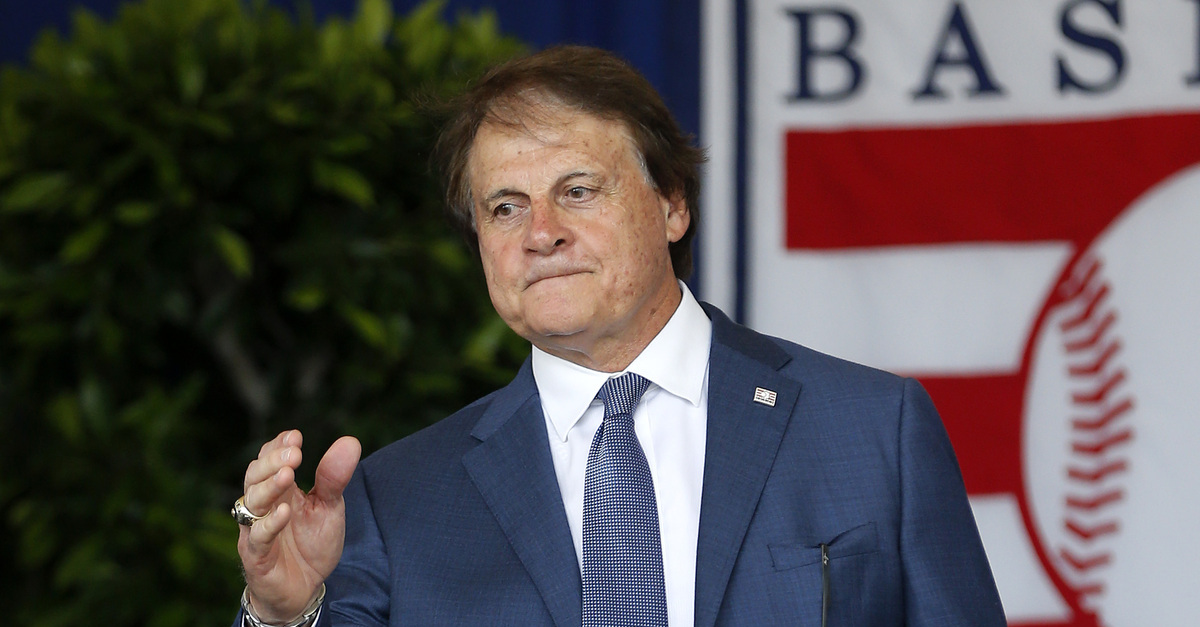 Hall of Famer Tony LaRussa is introduced during the Baseball Hall of Fame induction ceremony at Clark Sports Center on July 21, 2019 in Cooperstown, New York.

Newly hired Chicago White Sox Manager Tony La Russa was charged with driving under the influence (DUI) after allegedly leaving his flame-kissed car on the side of the road in Phoenix, Arizona earlier this year.

According to ESPN, La Russa allegedly swung for the fences in an effort to get out of that charge when he was arrested back in February–by rattling off his fame and professional accomplishments.

“Do you see my ring?” he allegedly asked the responding officer at one point.

The arresting officer said he told the old ballplayer he would not embarrass him and would be treated with the “utmost respect.”

ESPN reporter Jeff Passan noted that the outlet obtained a full copy of the arrest report on Tuesday, but only a few details from that document were made public.

According to that report, La Russa was discovered standing outside his car just before midnight on February 24.

The responding officer averred that he detected a “light odor of alcoholic beverage” when he arrived.

In response to questions, La Russa said he had been at a dinner with friends from the Los Angeles Angels and was on the way home when his tire blew out. After allegedly failing a field sobriety test, the officer began the process of arresting the baseball legend, who was described in the officer’s affidavit as “argumentative.”

“I had one glass of wine while at dinner with my friends,” La Russa allegedly said when asked if he had any drinks before driving, according to the police report. The longtime manager was later searched and placed in the back of the officer’s patrol car.

La Russa declined to blow for the police. He also declined to freely give away a blood or urine sample for alcohol-content analysis, according to law enforcement. This refusal prompted the officer to call in a search warrant whereafter he was able to extract two vials of La Russa’s blood and eventually performed an analysis.

The Hall of Famer reportedly had a blood-alcohol content of 0.08 or more and this marks the storied manager’s second known DUI. He previously pleaded guilty to similar charges in Florida in 2007.

“Because this is an active case, we cannot comment further at this time,”a White Sox spokesperson told the Chicago Tribune.

But the newly-hired manager reportedly doesn’t have much to worry about from his once-and-future employer.

According to USA Today, a “high-ranking” White Sox official said “La Russa is in no danger of losing his job or receiving any discipline by the club.”

Charges were filed in the case on October 28–just one day before the White Sox shocked baseball observers by rehiring La Russa for the first time in nearly 35 years.

La Russa previously managed the White Sox from 1979-86 after a short and injury-plagued career as a player in the major and minor leagues where his batting average was tepid at best. His original record as a manager in Chicago was 522-510.

La Russa was unceremoniously fired by the White Sox’s then-general manager Ken Harrelson in 1986 but the Windy City quickly reaped the whirlwind of that personnel change. La Russa went on to manage the Oakland Athletics and St. Louis Cardinals–winning World Series championships with those clubs in 1989, 2006 and 2011.

Chicago’s recently-re-minted and recently-re-charged manager was elected to the Baseball Hall of Fame and Museum in Cooperstown, New York in 2014. His career record currently stands at 2,728-2,365.