‘Hoping Daddy Can Still Pardon Him’: Eric Trump Excoriated for Saying He’ll Comply with Subpoena After the Election 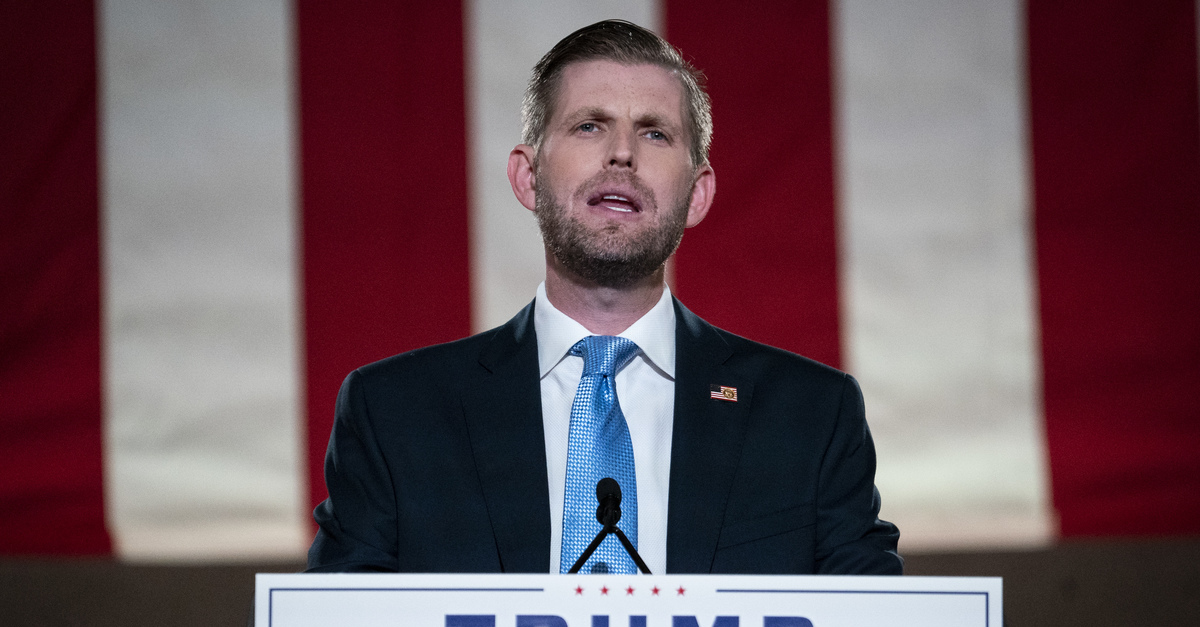 President Donald Trump‘s son and current steward of the family business, Eric Trump, has agreed to cooperate with New York State prosecutors–but there’s a catch. The younger Trump says he’ll sit down for an interview after the upcoming general election.

Per a Thursday filing in state court:

[I]n recent correspondence, counsel for Mr. Trump have made clear that he is willing to appear pursuant to the subpoena, and have also proposed four available dates after the Presidential election on November 3, 2020. In this regard, we note that the OAG investigation has been ongoing for approximately 18 months, and that additional [depositions] are scheduled into October 2020 for certain other individuals. In good faith, counsel for Mr. Trump proposed multiple dates beginning shortly after the election – just two weeks later on November 19 – because of Mr. Trump’s extreme travel schedule and related unavailability between now and the election, and to avoid the use of his deposition attendance for political purposes.

“It is well known that most, if not all, law enforcement and regulatory agencies studiously avoid certain actions within the 60-day period prior to a major election,” the filing continues.

“To your knowledge, did the president ever provide inflated assets to an insurance company?” Rep. Alexandria Ocasio-Cortez (D-N.Y.) asked Cohen, who replied in the affirmative and said that evidence of the rate gamesmanship would be found at the “Trump Org.”

Federal wire fraud statutes would likely implicate the behavior described by Cohen. Those laws offer prosecutors wide latitude to bring charges against anyone who commits fraud using mail, phone lines, fax machines, email, or the internet–what the law collectively understands as the “wires.”

A separate statute directly related to fraud committed against or using banks would also be a likely source of prosecutorial authority–but some caution is needed here. New York State cannot mount a federal prosecution but could, feasibly, turn over their findings to federal prosecutors in the Southern District of New York.

In August of this year, James filed a series of public and sealed court documents against the Trump Organization and Eric Trump over the Cohen fraud allegations.

One complaint asks an Empire State court to force the defendants’ compliance with previously-issued subpoenas that demand the release of sensitive financial information. That information, James believes, may provide evidence of the aforementioned fraud scheme. The attorney general also specifically requested Eric Trump’s testimony as the putative head of the corporation at present.

The conditional offer by the 45th president’s son immediately set off alarm bells and criticism across social media.

“Hmmm, why ever could that be?” attorney and CNN legal analyst Elie Honig mused on Twitter.

“The very fact that Eric Trump is willing to comply — but not until after the election — tells you everything,” Honig elaborated in a message to Law&Crime. “Why not sooner? We are still seven weeks out. That’s plenty of time. Obviously we don’t know what he will say but the timing itself is significant and telling.”

Other attorneys were similarly dismissive of Eric Trump’s proposed timeline regarding his long-sought testimony.

“The New York AG should haul Eric Trump in BEFORE the election for this very reason,” tweeted attorney, author and The Young Turks host Adrienne Lawrence.

Of course so when he get indicted and convicted he hoping Daddy can still pardon him. https://t.co/BZEeMNHfxh

The presidential pardon power, it should be noted, extends only to federal criminal offenses.

Others joined in with puzzled “that’s not how this works” and “Where’s Eric?” takes.

I was not aware you could defer subpoenas https://t.co/51AC9ns72H

Back to the campaign trail he goes?